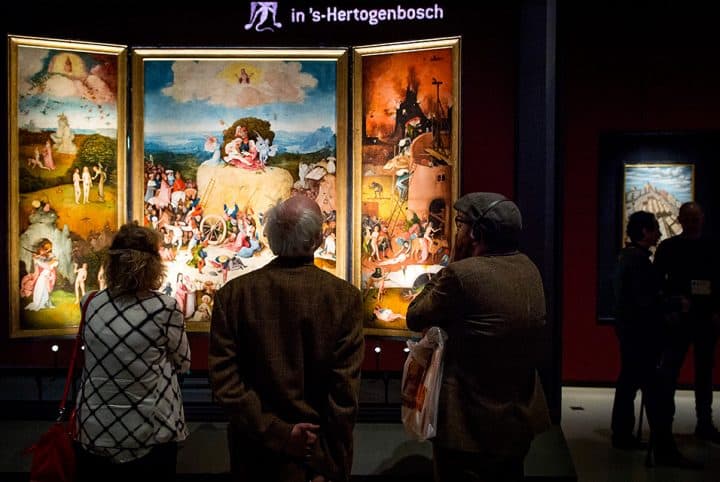 DEN BOSCH (AFP).- For the first time in 500 years, and probably ever, some of the most gut-wrenching, tormented works of Hieronymous Bosch have been brought together for an unprecedented exhibition.

Seventeen of the Dutch artist’s surviving 24 paintings and 19 of his 20 drawings have been gathered in a stunning coup by a tiny museum in the southern Dutch town where he lived, worked and died.

“It’s the first time that there has been an exhibition with so many of the works of Heironymous Bosch,” museum director Charles de Mooij told AFP Thursday, as the collection was unveiled to reporters.

The exhibition opened Saturday in the Noordbrabants Museum in Bosch’s hometown of s’-Hertogenbosch and marks the culmination of a nine-year quest by De Mooij to reunite the unique artistic legacy of the man dubbed “the devil’s painter.”

It also kicks off a year of events in the medieval town in southern Holland to honour its most famous son who was born Jheronimus van Aken in around 1450 and died exactly 500 years ago this year.

“The most fascinating thing about Bosch is his originality and creativity,” said De Mooij about the exhibition “Hieronymus Bosch — Visions of Genius” which runs until May 8.

“He created this world with creatures that cannot exist. But he imagined them in such a way, that he makes us believe they do exist.”

Bosch’s most famous work, a triptych called “The Garden of Earthly Delights” — which journeys from a scene of Adam and Eve in the Garden of Eden to descend into a terrifying vision of hell — is, however, not on display.

It hangs in the Museo Nacional del Prado in Madrid, and De Mooij knew Spain would never let it travel abroad.

But in a remarkable coup, the Prado did agree to allow Bosch’s “The Haywain” to leave Spain for the first time in 450 years.

It is on display among other important works such as “Death and the Miser” currently owned by the National Gallery in Washington, and “The Ship of Fools” from the Louvre in Paris.

The intense research which has accompanied the long preparations for the exhibition has also led to some remarkable discoveries.

Last week art historians revealed that a painting stored for decades at an American museum was in fact a work by the Dutch master.

The newly-uncovered painting “The Temptation of Saint Anthony” had been lying forgotten in storage at the Nelson-Atkins Museum of Art in Kansas City, Missouri, which acquired it in the 1930s.

And last year a drawing called “The Infernal Landscape” was also identified as indeed being by Bosch’s hand.

Bosch died in August 1516 and is buried in the town’s St John’s Church, whose demonical gargoyles are thought to have provided material for his paintings.

The post: New discoveries and restored paintings by Hieronymus Bosch go on show in exhibition, appeared first at: artdaily.org