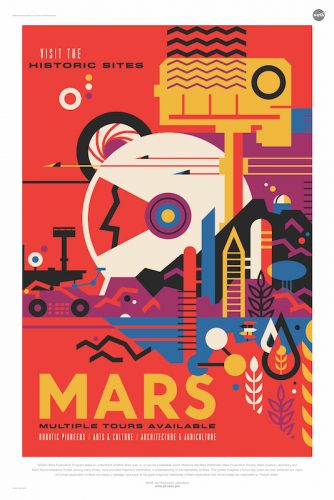 If I could send a message back in time, I might send it to the wide-eyed and skyward-looking children of 1960s America, apologizing that we never did build those jetpacks, flying cars, and moon colonies, but also letting them know that at least we, the citizens of the 21st century, have developed such technologies as smartphones and a myriad of ways for snack foods to taste both sweet and salty at once. 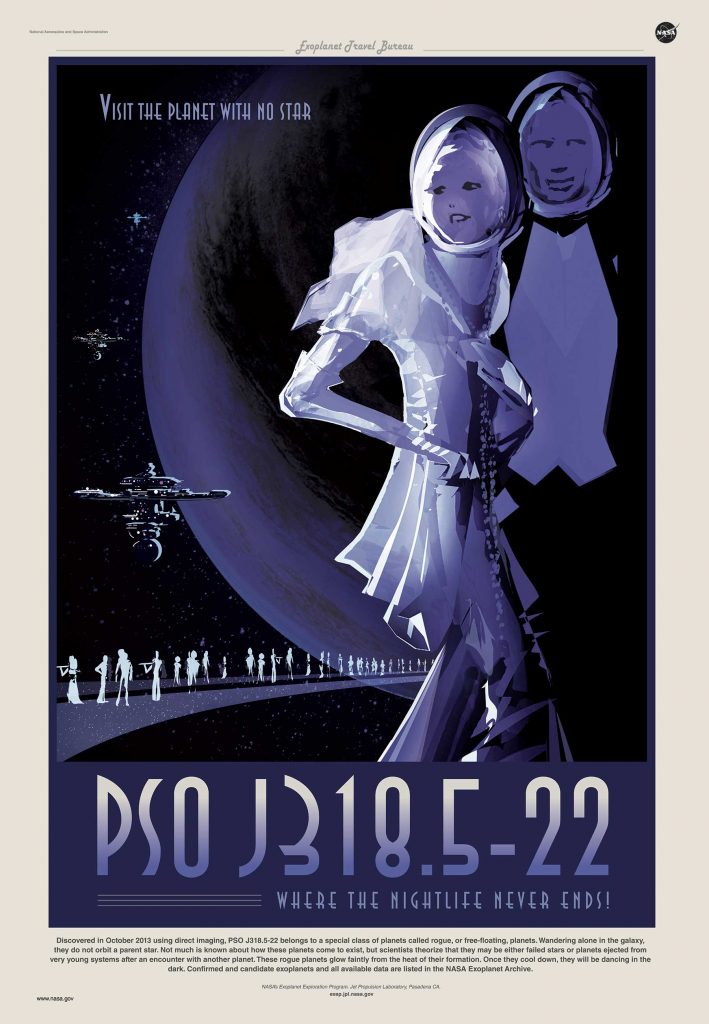 I probably wouldn’t tell them how many of us long for the spirit of their own time, which American history has labeled “the Space Age” for good reason. It had its share of awfulness, starting with the apocalyptic tensions of the Cold War, but that competition between societies did spur mankind to voyage boldly and unhesitatingly out into the great beyond, at least for a while there. 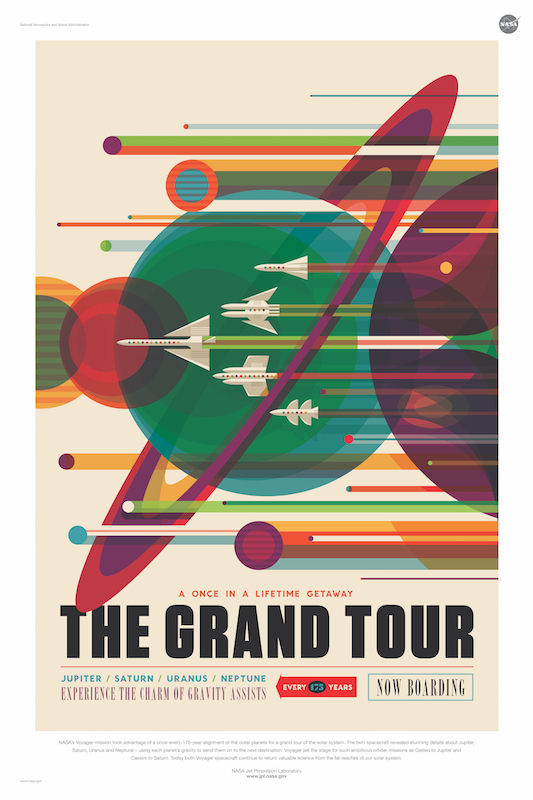 “Back in the 1930s and ’40s, during the height of the Great Depression,” writes Hyperallergic’s Allison Meier, “artists designed posters for the Works Projects Administration (WPA) to encourage travel to national parks and other tourist sites in the United States. NASA’s Jet Propulsion Laboratory (JPL) design studio is taking a similar approach to promote a future of travel to other planets at a time when its funding is up against budget constraints and even a journey to our galactic neighbor Mars may seem almost impossible.” And so we have this brand new series of fourteen Visions of the Future, free to download, print, and hang above your desk to fuel your own outer-space daydreaming. 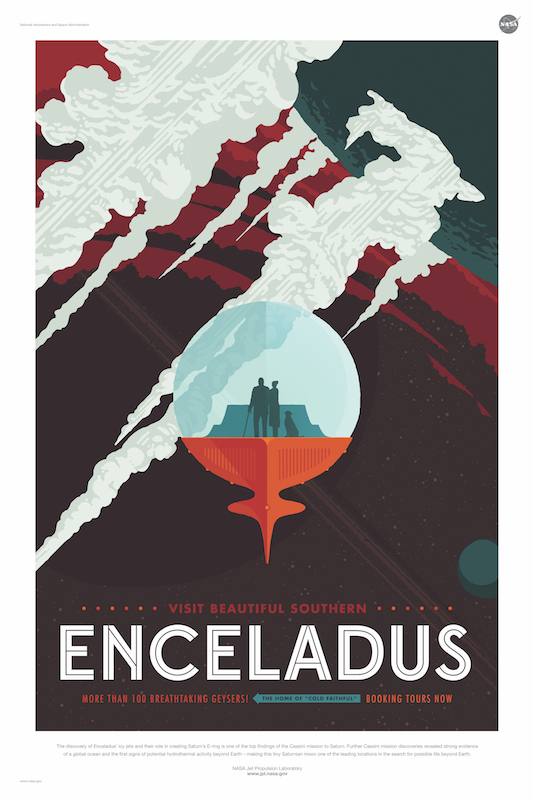 You’ll notice that all the artists commissioned have designed their space-travel posters—whether they promote the high gravity of the “super Earth” exoplanet HD 40307g, the one-day “Historic Sites of Mars,” or the “Grand Tour” of the Solar System—in a richly retro style reminiscent of 1930s air travel advertisements. This makes them artistically captivating, but also emphasizes the continuity between our present, the century behind us, and the centuries ahead. “As you look through these images of imaginative travel destinations,” says NASA/JPL’s site, “remember that you can be an architect of the future” — and every future worthy of the name comes built solidly upon a past. 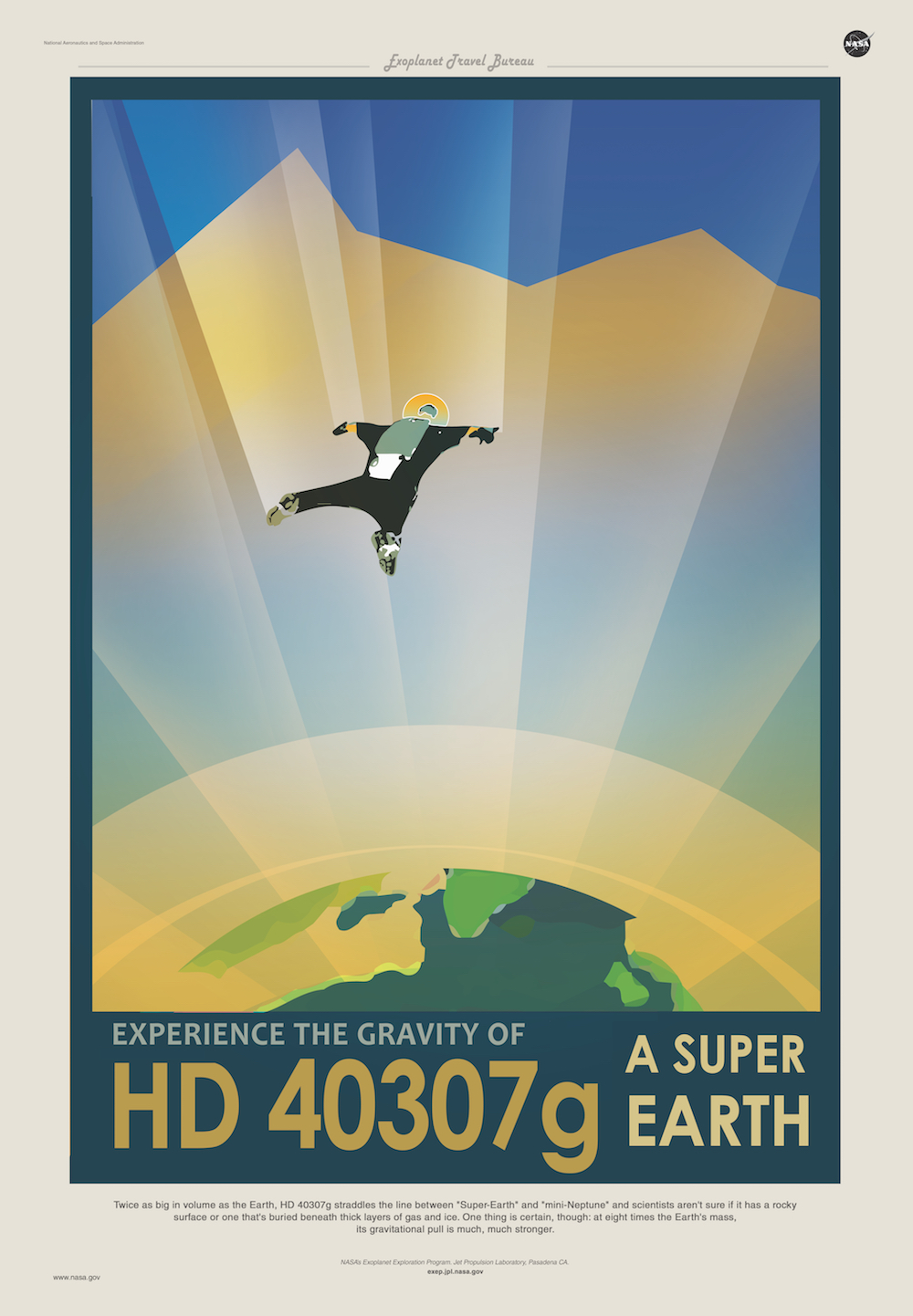 You can download the full collection of posters right here.

The post: Download 14 Free Posters from NASA That Depict the Future of Space Travel in a Captivatingly Retro Style, was published at: Open Culture

#blackmetal – Satan, the Self, and the City: The Melodrama and Melancholy of Black Metal – @MetalInjection
0 (0)