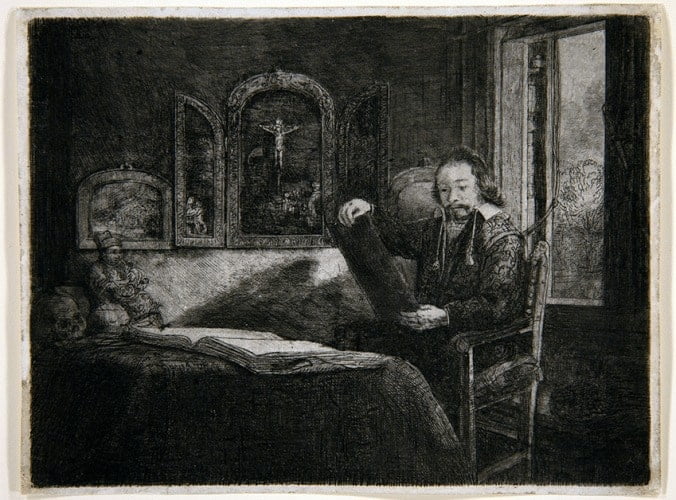 BRUSSELS.- Today Rembrandt is considered to be one of the greatest painters of all time, but during his lifetime he was mainly known for his qualities as an etcher.

This exhibition brings together around 85 original etchings which show us another, less familiar side to this popular artist of the Dutch Golden Age.

Rembrandt Harmenszoon van Rijn (1606–1669) was a Dutch painter and etcher. He is generally considered to be one of the greatest painters in European art and the most important Dutch master of the 17th century. The Nightwatch (1642) is undoubtedly his best known work; every day it attracts thousands of visitors to the Rijksmuseum in Amsterdam. Even if today people are mainly interested in his paintings, his masterly etchings were what made his oeuvre so popular in the first place. In his etchings Rembrandt dealt with the same themes as in his paintings, but they didn’t serve as preliminary studies: for Rembrandt etching was an artistic discipline in its own right. The fact that his etchings could be easily and widely distributed in large quantities and at very reasonable prices gave Rembrandt’s reputation a major boost.

The exhibition Rembrandt in black and white offers an extensive overview of Rembrandt Harmenszoon van Rijn’s (1606-1669) etched body of work. Around 85 etchings demonstrate the diversity of themes: from biblical, mythological and allegorical tableaus, to scenes from daily life, such as a peasant calling out ‘t is vinnich kout’. Alongside from the landscapes, nudes and portraits, it is mainly the self-portraits that are wellknown. A few masterpieces included in the exhibition are the etchings of the Hundred Guilder Print (ca 1648), the self-portrait of Rembrandt leaning on a stone sill (1639), Adam and Eve (1638) and View of Amsterdam (ca 1640-1641).

What is so special about these etchings? Rembrandt masters the medium and often plays with light and dark in his etchings, emerging as a photographic talent before the term was coined. His excellent timing and powers of observation mean that his etchings are often a kind of ‘snapshot’ of the moment just before or after the action. In The Blind Tobit (1651) Rembrandt depicts a scene from the bible: not the determining moment in which the father and son embraced each other after such a long separation, but the moment just before that, when the father rushes to the door, with a mixture of enthusiasm and anguish. On top of this everything looks extremely realistic: Rembrandt wasn’t interested in idealised bodies, but an Adam and Eve (1638) in flesh and blood.

Finally, it’s also important to point out that these are the original 17th century etchings: the majority of the prints were done by Rembrandt himself or else carried out in his studio. Unlike his paintings, where large sections were often completed by pupils, the etchings leave little room for doubt as to what has or has not been done by the great master: an etching plate is so small that only Rembrandt could work on it.

Jaap Mulders’ Private collection
The etchings all originate from Dutch collector Jaap Mulders’ private collection. This entrepreneur and former director of the Dutch National Ballet has been collecting original Rembrandt etchings for over 15 years. In total he has around 150 in his collection – around half of the 290 etchings in Rembrandt’s entire oeuvre.

Interactive app
The use of a visitors’ tablet is included in the visit. There is an app on it which has been specially created for the occasion and which encourages the public to take a closer look at the etchings and to study the complexity of the techniques used.

The visitor is provided with additional information about every etching on display. By scanning the etching you obtain extra information about the context of the work, a video with a short explanation by the collector Jaap Mulders and high resolution images with which you can study the etching right down to the smallest details.

The app makes it possible to take a fun look at the technique of etching. There is a “Spot the difference” and “How well do you know Rembrandt?” for children (and their family). These games challenge visitors to distinguish an original Rembrandt etch from a fake.

The post: Rembrandt in black & white: Exhibition of 85 original etchings on view at BOZAR in Brussels, was published at: artdaily.org

No Thoughts on #rembrandt – Rembrandt in black & white: Exhibition of 85 original etchings on view at BOZAR in Brussels – @artdaily.org
0 (0)