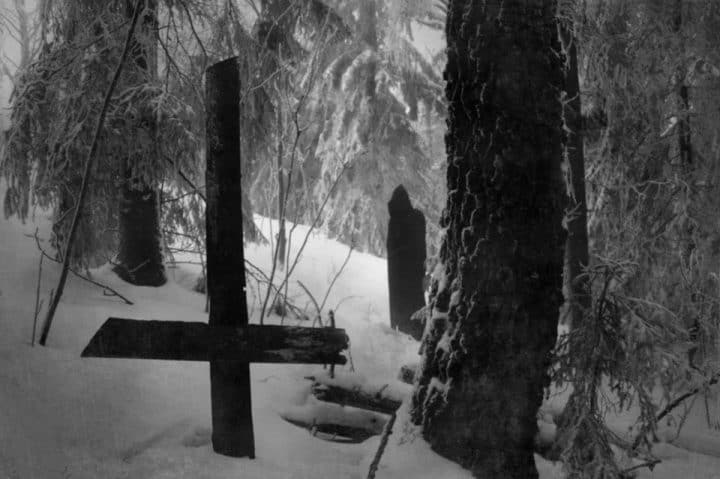 #blackmetal – Satan, the Self, and the City: The Melodrama and Melancholy of Black Metal – @MetalInjection
0 (0)

Black metal is a lot of things—bombastic, Wagnerian, nihilistic. Black metal is also the intentional opposite, or rather the opposition to rock and roll’s traditional pursuit of wealth, women, and wine. Whereas other music genres, even metallic ones, search out rosy-colored things, black metal acts revel in darkness, misanthropy, suicide, and isolation. Black metal is supposed to be enjoyed alone by alienated individualists. It’s elitist music for a million elitists. To put it quite simply, black metal is the convergence of extreme melancholia and extreme melodrama.

Because of this, the soul of black metal is much older than Venom. Although he did not wear corpsepaint, Charles Baudelaire certainly penned poems that today reek of black metal ambience. A notorious spendthrift who consorted with high-end prostitutes when not translating Edgar Allan Poe into French, Baudelaire wrote arguably the most sinister collection of poetry ever produced during the mid-19th century. Published as Les Fleurs du mal, or The Flowers of Evil, Baudelaire’s volume is replete with rotting corpses, Satan, sex, and murder. Take for instance the notorious poem “A Carcass.”

And the sky was watching that superb cadaver

So frightful was the stench that you believed

You’d faint away upon the grass.

The blow-flies were buzzing round that putrid belly,

From which came forth black battalions

Of maggots, which oozed out like a heavy liquid

All along those living tatters.

Such emphasis on the image of the decaying body appears, on the surface at least, to be more death metal than black. One should remember though that black metal evolved out of death metal, with black metal titans such as Mayhem initially writing low-fi screamers about mutilation and the desecration of corpses. Although black metal, especially the Scandinavian variety, evolved into a musical genre more inclined to speak about mystical and occult matters, the crassness of Baudelaire’s “A Carcass” has not been fully expunged from black metal tradecraft. 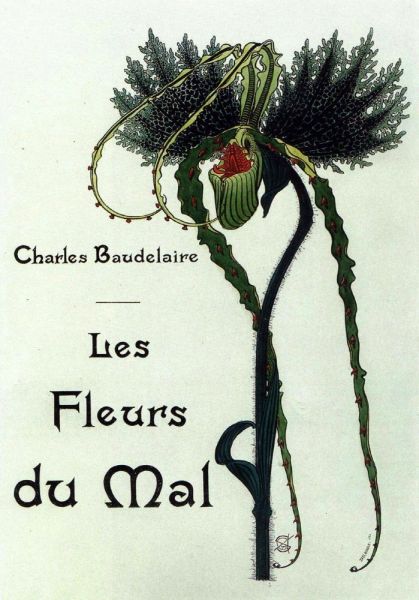 Baudelaire’s other contribution to black metal stems from his cultivation of the urban idler, or  flâneur, as narrator. Influenced by the strolling masses of well-heeled men he saw daily on the streets of Paris, Baudelaire created a darker type of watcher: a detached observer capable of anything at any time. While the Marxist literary critic Walter Benjamin asserted that Baudelaire’s many flâneur narrators was a nod towards the growing power and influence of capitalism, I tend to think that Baudelaire’s strange urbanites, such as the man talking to himself in “At One O’Clock in the Morning,” are more than likely manifestations of paranoia. After all, like Poe’s own “The Man of the Crowd,” the expansion of European and North American cities during Baudelaire’s day meant that more and more strangers, some of whom were deadly criminals, were becoming a fact of life. Despite the fact that so much of black metal is about the natural world, with music videos and album covers typically displaying nighttime scenes of snow-caked trees and mountains, the genre itself is deeply urban and began its life in such cities as Newcastle, Oslo, Stockholm, and San Francisco. As such, black metal’s “man in the wilderness” trope can be read as the cry of city dwellers yearning to escape what the city (and civilization) hath wrought.

From Baudelaire, black metal lyricists also learned to appreciate sheer decadence. Reading Baudelaire is akin to smelling lilies in a room full of black candles. No band has done a better job of recreating this same feeling as Cradle of Filth, a quasi-black metal act who routinely concoct elaborate and over-the-top lyrics that drip with gothic atmosphere.

Dawn discovered her there

Beneath the cedar’s stare

Flown to gown, her beauty bared

Was starred with frost, I knew her lost

I wept ‘til tears crept back to prayer

Rather than the fallen streets of Baudelaire’s Paris, Cradle of Filth and other likeminded acts tend to shroud their music in layers of fog and suggestion. The language is always epic and overblown. With such black metal bands, long, eldritch words are preferable to shorter, more modern ones. This is more or less a darker shade of Romanticism, an artistic movement of the 18th and 19th centuries that embraced certain elements of the Enlightenment while simultaneously focusing on the sublimity of nature. More often than naught, English Romantics such as Lord Byron, who helped to inspire the Luciferian “Byronic hero” model, which today continues to inspire the posturing of black metal and its fans, and William Wordsworth wrote of nature as a gigantic, awe-inspiring force that was superior to human reason. The knowledge of humanity’s inferiority to the natural world helped to tinge a majority of Romantic-era poems with a sense of melancholy that can still be found in certain black metal songs.

Sometimes in the dead of the night I mesmerize my soul

Sights and visions prophecies and horror

they all come in one

Mother north – united we stand (together we walk)

Finally, besides Romantic melancholy and Baudelarian decadence, the other major influence on the composition of the black metal aesthetic is, you guessed it, the Devil. El Diablo, if you will. Leaving aside whether or not black metal musicians are actually practicing Satanists (here’s a hint: most aren’t), it’s unquestionable that the image of Satan—a prideful and Romantic individualist dedicated to perusing his own whims—has largely influenced the style and substance of black metal. Of course, the medieval Satan, with his goat horns and his black masses, will always be a popular figure for t-shirts and band logos, other configurations of Satan also populate the sonic landscape of black metal.

Of these configurations, none has been more powerful than the depiction of Satan as the ultimate libertine and supporter of personal strength. This is the Satan worshipped by Aleister Crowley and Anton LaVey: the strong god of sexual energy and freedom. This Satan is the the Satan of you, the self-sanctified black metal fan. To quote At the Gates in “Kingdom Gone,” “I am the messiah.” Black metal’s obsession with Satan is in reality a self-obsession, a dramatic interest in pursuing power, knowledge, and those things that are supposedly outside the bounds of normal, middle class life. Ayn Rand would’ve noticed immediately that black metal is swimming in rational self-interest. Unsurprisingly, much of modern Satanism and Western occultism is indebted to Rand’s philosophy. 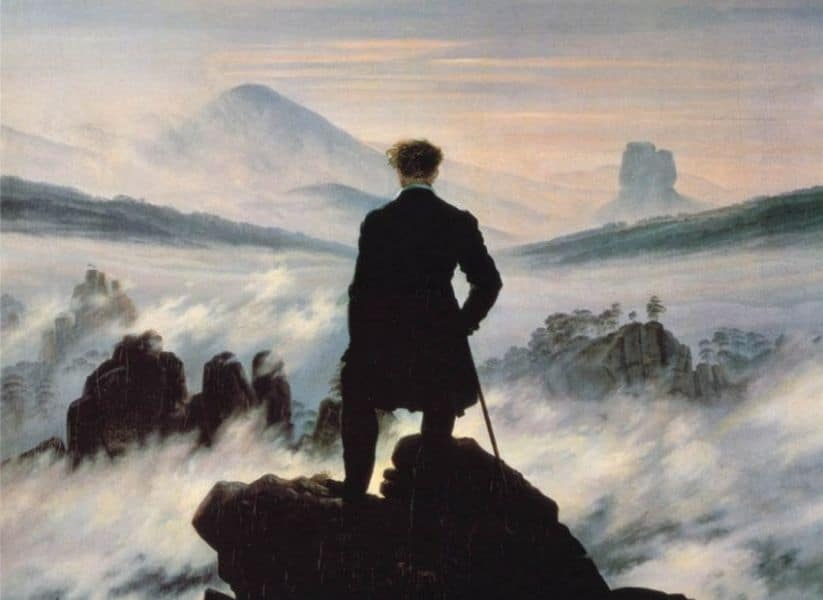 So, in knowing all of this, how should we define the black metal aesthetic? It’s certainly an elitist musical form imbued with Friedrich Nietzsche’s “will to power” and other elements taken from the reactionary philosophies of old Europe. That said, black metal is also a revolutionary genre that inverts everything that music is supposed to celebrate. In an age so thoroughly consumed by technology that regular human beings have become more or less cyborgs (think about it: how often do you think of your phone as an extension of your own brain?), black metal sounds and acts primitive. It embraces pagan forests, even though most musicians in corpsepaint live in cities that offer very few opportunities to be like the heroes in the Norse sagas or even in J.R.R. Tolkien’s The Lord of the Rings. Black metal also holds tightly to the decadence and debauchery of Baudelaire, the melancholy of the Romantics, and the symbolism of the post-medieval Satan. In short, even considering all of the various permutations of black metal, it is the only genre in extreme music that is openly Faustian. To fully define or categorize it would be to kill it.

O artigo: Satan, the Self, and the City: The Melodrama and Melancholy of Black Metal, foi publicado em: MetalInjection

The post: Satan, the Self, and the City: The Melodrama and Melancholy of Black Metal, was first published at: MetalInjection

No Thoughts on #blackmetal – Satan, the Self, and the City: The Melodrama and Melancholy of Black Metal – @MetalInjection
0 (0)