Yōji Kuri is the big daddy of Japanese animation. Now in his late eighties—he hits the big nine-“o” next year—Kuri was one of Japan’s key pioneering animators/artists/directors who produced around forty short animated films during the 1960s and early seventies—all of which brought independent Japanese animations to global attention. He was for a time namechecked as “the only Japanese animator whose work is known in the West,” which, although a nice piece of hyperbole, gives some idea of his importance at the expense of ignoring quite a few of his contemporaries.

Kuri’s animations tend to be strange, surreal, experimental, and darkly compelling, yet often accomplished in what you might call a naive style. Take for example his Hieronymus Bosch-inspired animation The Midnight Parasites from 1972. Here Kuri imagines what would life might be like if we all lived in Bosch’s painting “Garden of Earthly Delights.” It’s a basically shit and death or rather a cycle of life where blue figures live and die; eat shit and shit gold; are skewered, and devoured; are regurgitated and reborn to carry on the cycle once again. It’s dark, dirty, oddly beautiful, with a groovy soundtrack—the kinda short flick that might pop up as a support to the late night psychedelic double-bill at the local fleapit. 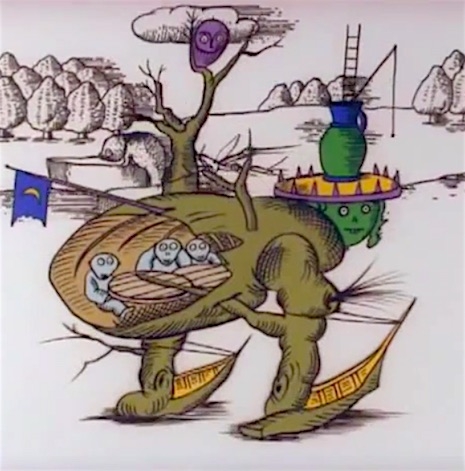