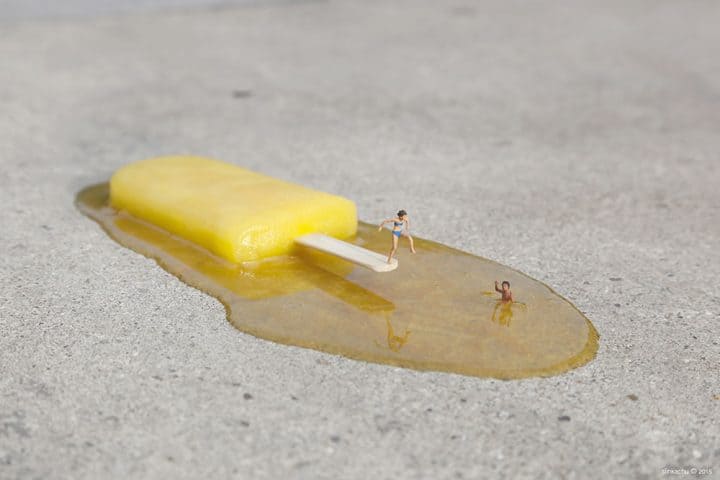 The Miniature Street Interventions of Slinkachu – @This is Colossal Blink, and you’ll miss it. Secreted amongst weeds growing in the cracks of sidewalks or hidden in a tiny pile of trash, street artist Slinkachu creates site-specific interventions of miniature people living just under our feet. More than just hiding tiny figurines in public places, each of his artworks are carefully considered, crafted, and installed before the artist takes a photo to document it. While clearly humorous in nature, Slinkachu’s pieces touch on much larger ideas of environment, globalization, and a culture of isolation often found in large cities. Via Andipa Gallery:

These figures embody the estrangement spurred by the over-whelming nature of the modern metropolis, and incite a renewed perspective of the everyday urban experience to those who find them. This sense of isolation and melancholy, however, is accompanied by sense of irony and humour that makes Slinkachu’s commentary all the more poignant.

You can see more of his little people artworks on Instagram and at Andipa Gallery. (via This Isn’t Happiness) Mary McCarthy on Love and Hannah Arendt’s Advice to (…) – @Brainpickings