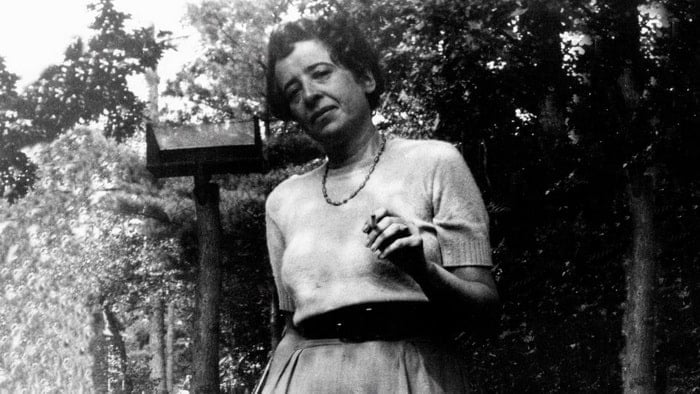 “What’s the use of falling in love if you both remain inertly as-you-were?”

Hannah Arendt (October 14, 1906–December 4, 1975) remains one of the most blazing intellects of the past century, whose ideas about the crucial difference between thinking and knowing, the power of outsiderdom, our impulse for self-display, and what free will really means continue to electrify with their insight into the fabric of being.

In 1944, Arendt met the writer and political activist Mary McCarthy (June 21, 1912–October 25, 1989) in a Manhattan bar. So began an intense lifelong friendship. After Arendt’s death, McCarthy became her literary executor. Their letters, collected in Between Friends: The Correspondence of Hannah Arendt and Mary McCarthy (public library), are on par with such great epistolary friendships as those between Thomas Mann and Hermann Hesse, Elizabeth Bishop and Robert Lowell, and Denise Levertov and Robert Duncan.

What makes Arendt and McCarthy’s correspondence so remarkable is its uncommon combination of intellectual rigor and unflinching openheartedness. In between offering comprehensive feedback on each other’s work and discussing subjects ranging from consciousness to politics to Kant, they also share the most irrational perplexities of the human heart — nowhere more movingly than in the realm of romance.

A decade into her marriage to her third husband, Bowden Broadwater, 46-year-old McCarthy had grown restless in a relationship founded on affection and agreeableness rather than passion. In May of 1956, she met an English book reviewer and former heavyweight boxer named John Davenport, and the two embarked upon an ardent affair. But the following spring, through a chance encounter with a friend of Davenport’s named Mr. Hughes (whom Davenport had initially introduced as his cousin but who in actually was not), she discovered that her lover was a pathological liar, an alcoholic, and an occasional thief.

McCarthy was completely shocked by the revelations, and yet what her intellect found morally repugnant her heart refused to factor into the infatuation. She wrote to Arendt, reporting this unbearable psychoemotional dissonance:

The truth is, I still care about him, just as much as ever, though perhaps this feeling would not last if I saw him in actuality. But this caring, of course, is really hopeless now. Hughes says he is hopeless and I believe him… Hughes says he started to write too late and lacks all discipline and habits of work, so that he keeps making these massive escapes into lies and drinking. Hughes says there’s a strong self-destructive urge in him and that, whatever the superficial motive, good or bad, that made him break off our correspondence, the real thing must have been that he was rejecting the one thing that could have saved him.

Oh, Hannah, isn’t it awful? I still would do anything for him … but what can I do?

In a letter from early June, Arendt counsels McCarthy on these “crooked corkscrews of the heart” (a phrase of W.H. Auden’s, which Arendt loved) and the whole romantic delusion of being able to save anyone from themselves, to love them out of their demons — a delusion responsible, I would argue, for the vast majority of broken hearts the human race has produced. Arendt writes:

When an acknowledged liar speaks the truth, he does not want to be believed… There are two things which could “save” him: either a woman, but then saved for what? Evidently for some form of respectability. Or: more than talents, namely almost genius, or a talent so compelling that it will overrule everything else. (This is of course the case of people like Brecht or Heidegger.) But if this Who they are is not matched by qualities and gifts, what can there remain to do? And then life becomes a very long and rather boring business; for the Who as such is nowhere recognized in our society, there is no place for it. Under such circumstances, to destroy oneself and become “self-destructive” can be a time-consuming and rather honorable job. More honorable and probably less boring than to save oneself. The only thing which is really not permissible is to drag other people into one’s own amusements… Certainly, there is a great deal of cruelty in all this; but then you can’t expect somebody who loves you to treat you less cruelly than he would treat himself.

McCarthy was eventually able to extricate herself from the relationship despite its self-mutilating magnetism. But by the spring of 1960, her marriage to Broadwater already beyond salvation, she was head-over-heels in love with another man — a diplomat named James West. In a letter to Arendt from that May, while separated from her husband and awaiting a final divorce as West was working on the same with his wife, McCarthy writes:

The next mail leaves in forty-five minutes, and I’m writing you this note for purely selfish reasons: because my heart is full of emotion and I want to talk. As if we were in your apartment. Bowden … has written three times in response to my last letter, and so I’ve purposely slowed down a little on answering, not to keep up a fevered correspondence with him, which would awaken all sorts of hopes. Indeed, they are awake. And it’s so sad, because I grow fonder of him as he recedes a little into the distance and all the memories become good ones; the thought of him suffering, moreover, makes me want to scream aloud. He writes that he is not sorry, in a way, that this happened because it made him realize what he wanted or loved, and that he never knew he wanted or loved anything before.

Meanwhile, and as a strange and soaring trumpet-music to this growing tenderness I feel for Bowden, my love for Jim is increasing till I am quite dizzy. I find myself changing or perhaps that is not the right word, coming to life in a new way, like somebody who has been partly paralyzed. And I’ve become conscious in myself of certain shrunken or withered character-traits that I never reckoned with before. Quite unpleasant they are too. You remember my telling you once that my marriage to Bowden was just two people playing house, like congenial children? Well, I slowly realize that all my love affairs and marriages have been little games like that — and snug, sheltered games. And that all this should happen with a U.S. government official seems utterly bizarre in a way… So I shall stop and run for the mail and only end by sending you much, much love and winged thoughts.

Arendt had cautioned McCarthy against getting hurt in that familiar way of trying to change another person with the sheer power of her love. In a letter sent three days later, while suggesting that certain kinds of getting hurt are the inevitable growing pains of love, Arendt reiterates the admonition against that particular peril:

[Some] getting hurt … is only another way of being alive. But, please don’t fool yourself: nobody ever was cured of anything, trait or habit, by a mere woman, though this is precisely what all girls think they can do. Either you are willing to take him “as is” or you better leave well enough alone.

A week later, after sharing with West some of her romantic history and incurring a fit of his jealous fury, McCarthy reflects on the incident in her response to Arendt:

Hannah, I don’t know what you meant about my getting hurt, unless (as I thought) that he had the power to hurt me, that is to use me badly, as they say. Well, he has and he could. It surprised him… It surprised me too. Our joint surprise was perhaps rather funny — naive. But it “taught” him something and me something. We’ve both been mulling this over by mail ever since — rather mulling over the implications. The problem is how to curb this tendency (which is really, with him, a form of self-laceration) without closing off certain areas. I.e., my natural tendency would be not to tell him things that I expected would bother him and his would be not to show that he was bothered, not to let me see his suspicions or jealousy. But that way you would soon land in a relation of complete falsity — manipulating the truth and each other. And the point of this love is its honesty; everything is offered, nothing is held back. It’s total, like total war, and that power or drive comes from him. I have never known another man who had it and I’ve also become aware of how prudent (in spite of being romantic) I’ve always been myself, how many precautions I take against being wounded. So there is the dilemma. If we aren’t careful, he will hurt me, for I’m particularly alive to a sense of injustice, of being wrongly suspected or accused, and if he hurts me I will start protecting myself by congealing [sic]. And yet we don’t want to be “careful.”

Echoing the assertion that Martin Heidegger, Arendt’s great love, had made in their beautiful love letters decades earlier — what makes love so transformative, he asserted, is that “we become what we love and yet remain ourselves” — McCarthy adds:

Despite your warning that nobody ever changes for a mere woman, I think we shall both change a little. What’s the use of falling in love if you both remain inertly as-you-were? If he hopes for an inner change, a release from the monotony of certain habitual reactions, that’s partly why he’s in love, why he troubled, so to speak, to fall in love instead of just having an affair. And the hope is part of the man as much as the habitual reactions. If you take him “as is” you take the hope too.

On Valentine’s Day in 1961, McCarthy and Broadwater finally obtained their divorce. She married West almost immediately and the two remained together for twenty-eight years, until death did them part.

Complement this particular portion of the wholly magnificent Between Friends, edited by Carol Brightman, with sociologist Eva Illouz on why love hurts, philosopher Erich Fromm on what is keeping us from mastering it, and Virginia Woolf on what makes love last, then revisit Arendt on time, space, and the thinking ego, how we humanize each other, and her love letters with Martin Heidegger.

The Miniature Street Interventions of Slinkachu – @This is Colossal0 (0)