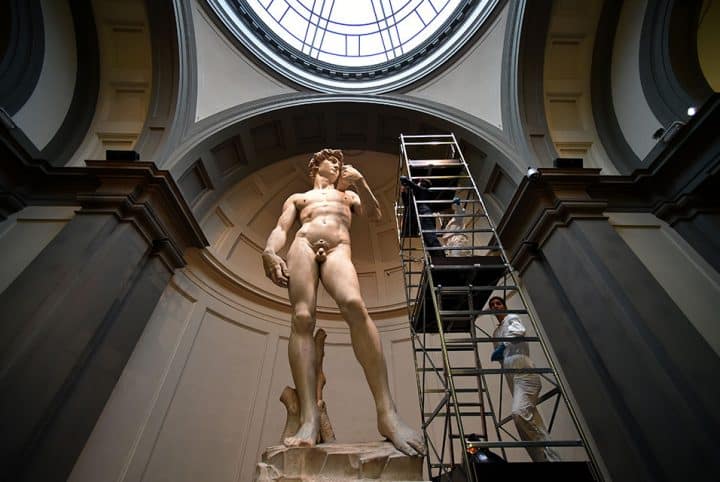 FLORENCE (AFP).- Michelangelo’s world-famous statue of David got a clean-up Monday financed by a US non-profit group which has spent some 500,000 euros in recent years preserving such Renaissance masterpieces.

A team of experts spent 24 hours dusting off the giant statue at the Galleria dell’Accademia in Florence, a process which takes place every two months, caught this time by an AFP photographer.

“In recent years we have spent nearly 500,000 euros ($544,000) to help preserve the masterpieces of Michelangelo,” said Simonetta Brandolini d’Adda, head of the Friends of Florence non-profit.

The five-metre (16-foot) statue was crafted by the Italian master between 1501-1504 from a block of marble.

A replica stands in the central Florence square once occupied by the towering statue, while the original has been moved into the museum to better protect it against pollution and the elements.

The post: Michelangelo’s world-famous statue of David gets expensive clean-up by experts, was published at: artdaily.org

#coenbrothers – How the Coen Brothers Put Their Remarkable Stamp on the “Shot Reverse Shot,” the Fundamental Cinematic Technique – @Open Culture