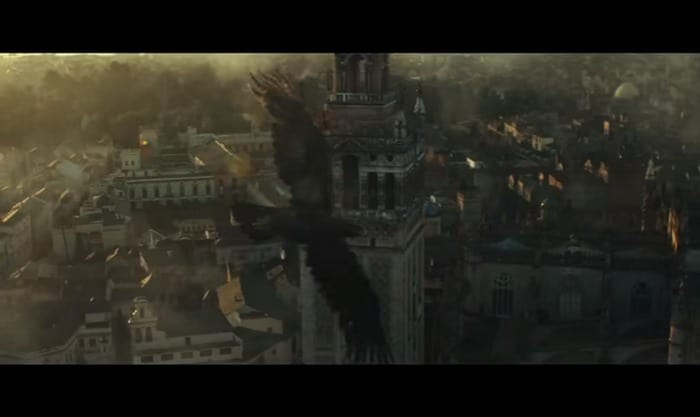 Assassin’s Creed International Trailer Dials Back The Kanye West, Is So Much Better – @Cinemablend0 (0)

Last month, the Assassin’s Creed trailer premiered to the internet with decent feedback, and one overwhelming gripe. That gripe involved the soundtrack to said trailer being dominated by the Kanye West single “I Am A God,” which kinda-sorta fit, like a Christmas sweater that just a little overboard in either direction. If you can agree with any of those statements, you’re in luck, as a new international trailer has premiered with at least 85% less Kanye. Take a look, and a listen, below.

The new Assassin’s Creed trailer debuted on ComicBook.com, and from a visual standpoint, it really isn’t all that new. Instead, the novelty of this second go around is in the fact that, as previously mentioned, the soundtrack has been replaced with mostly ambient noise. At the 00:45 mark, the music starts to come back into the picture, and by that point the inclusion of Kanye’s refrain of “I am a God” is omitted, jumping back in with the rest of the song, as originally included. Though don’t think you’re completely rid of Kanye just yet, as his dulcet tones reappear at the very end of the trailer.

While watching this official re-cut of the Assassin’s Creed trailer isn’t too different from the original release, having a different audio track to compliment the same images we saw last month does manage to help the viewer take said images in. Whether you’re a Kanye fan or not, you have to admit that the original audio mix for his song was extremely distracting, as you either got caught up in your love or hate of the song, and couldn’t exactly see the wonder of Michael Fassbender’s Parkour skills. Just in case you wanted to try and prove us wrong, we’ve included that original trailer below, for your refreshed viewing.

Though if neither version of the film’s trailer are doing it for you, then perhaps you would like to see one more alternate cut? If you click here, you’ll be able to see the previously covered version of the trailer that omits Kanye West’s song entirely, and supplants it with a more standard orchestral / choir cue. No matter which version of the trailer you prefer, at the very least you have to admit that the music to a trailer, much like a film at large, changes everything. Which has us wondering how good the score to Assassin’s Creed will be, as compared to the official trailers provided by the studio.

We’ll keep our ears open for the potential musical delights Assassin’s Creed may be hiding, as its December 21st release is far enough that the score may not even be written / recorded by the film’s composer, Jed Kurzel. Still, should we hear anything new, we’ll report back as fast as possible.

No Thoughts on Assassin’s Creed International Trailer Dials Back The Kanye West, Is So Much Better – @Cinemablend0 (0)