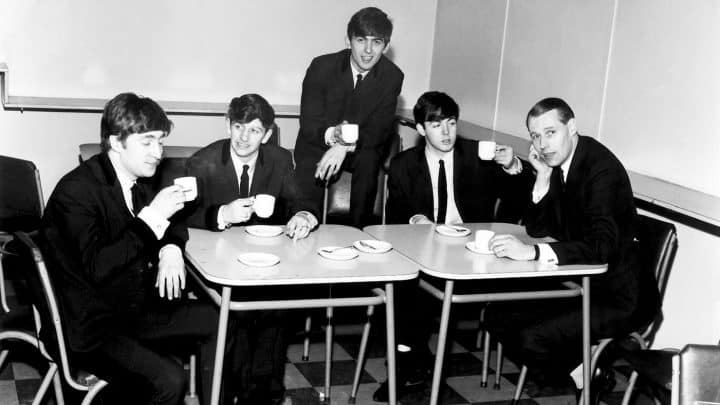 George Martin‘s passing inevitably causes some mulling on the long-belabored concept of the hard-to-pin-down Fifth Beatle — as if four were not enough, and six would be too many.

Martin, better than anyone, would have understood what a silly notion this was, an oxymoron, in fact, given that the four actual Beatles not only changed the world, but were, thanks to their bond with each other, also hermetically sealed off from it.

Asked a question about, say, politics, one of them might answer, “We don’t know what we think about that yet,” evidence of an interlocking mental kinship that caused Martin to take the band on in the first place, after inquiring, during a crucial first meeting, if there was anything the band didn’t like, to which George Harrison replied, why yes, Martin’s tie, in fact.

A number of people have been candidates for the title of Fifth Beatle, so far as the puff pieces of yore went. Manager Brian Epstein was a regular contender for the invented honor, but Epstein was more fan boy who cost the band a lot of money through naive business deals. You’d think if you were a Fifth Beatle, you’d be an absolute stud at advancing the Beatle cause.

Then there were fops like Murray the K, the NYC disc jockey who was a veritable master of a hanger-on, all but wiping Ringo’s ass on the band’s first U.S. visit in February 1964. But K’s shtick was the shtick of the entire Fifth Beatle enterprise, a PR grab, a cheap headline, another way to spin a new story off on a band that had editors demanding ever more content without much in the way of depth. This, after all, was supposed to be cute.

Martin, though, was the closest the Beatles had to a creative partner, and if the individual — and combined — genius possessed by John Lennon and Paul McCartney might have flowered into something world-changing, it would have been a flower of a different genus were it not for Martin.

They had the artistic gravitas; he had the language, and a way of facilitating, of channeling, of suggesting, such that that gravitas could get outside the world of four intensely creative men, and out into the world of everyone else. Without George Martin, there would still have been the Beatles. But not the Beatles as you know them, and not the Beatles at their most Beatlesque.

The routine didn’t vary much: Lennon or McCartney would sit before Martin with an acoustic guitar, playing their latest composition, the producer on a high stool, listening, thinking, at first, if the song was any good, if it might be good enough to be a single, and later, as time went on, applauding inwardly over the latest bit of brilliance.

The general internal applause never diminished Martin’s judgment in saying something was rubbish, or needed work, or, maybe most importantly, in what direction the group could go in the studio with the new number.

McCartney rolled out of bed one morning with the melody for “Yesterday” in his head, and went around for weeks humming it to people, incredulous that he’d come up with it himself, but it was Martin who ever so gingerly — for the Beatles still viewed themselves as rough-and-ready Northern rockers, only in suits now — that a string quartet might be just the thing.

He could find the band irksome, childish. He was by no means a “free love and let’s-take-a-handful-of-these-pills” kind of person, as they were becoming, but he met their spirit in terms of what one might call not giving a fuck in terms of what had been done before, what the rules were, what the rules for everyone else, maybe, were. The Beatles always had a certain emotional avant-gardism, and so did Martin, going back to his work with the Goons, which immediately got him on John Lennon’s side. 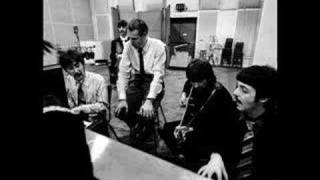 Martin was awed as he sat on his high stool and listened to Lennon first play him “Strawberry Fields Forever.” Just as he was dubious — for a time — when Lennon, unable to decide if he wanted to use the slower, emotionally tugging, dreamy version of the song, or the incessant, loud, sonically intense iteration, simply told Martin to splice half of each version together. He didn’t understand — nor care — that they were in different keys, there’d be a horrible, audible glitch instead of an undetectable seam. Not his problem. He’d done his part. And now Martin, of course, would do his.

And he did. The result is no less than one of the handful of greatest studio creations of its decade, and if McCartney played the bass, Lennon rhythm guitar, Harrison lead and Starr drums, you might say that Martin played the studio, or helped the Beatles to, anyway.

The term Fifth Beatle, and its associations, would practically belittle the man. For just as the four Beatles possessed a oneness between them, so their producer had his own formidable autonomy. When the one was brought to bear on the other, you have genius shepherded by brilliance. And something infinite. Or something well past mere notions of four and five.

The post: Why ‘Fifth Beatle’ Doesn’t Do George Martin Justice, was published at: Rolling Stone