Mozart as a child (Mozart's childhood)

Little five-year-old Wolfgang Amadeus Mozart performed on the harpsichord, his small, dimpled hands moving quickly and precisely across the notes. The Empress of Austria, Maria Theresa, and her family looked on in delight.

When he had finished his performance, Wolfgang ran up to the Empress, climbed upon her knee and kissed her. Not usual protocol, but the Empress kissed him back, charmed by his character and impressed by his talent.

The Empress's daughter, Marie Antoinette, only one year older than Wolfgang, came running to remove the little boy from her mother's knee, only to be playfully wrestled by the little boy. The Empress later gave Wolfgang a beautiful coat which he often wore when he gave concerts.

Although Salzburg was 'home', Wolfgang's early life was not spent in any one place for very long. His childhood involved years of traveling from one European city to another - Austria, Germany, France, Italy, and England. Wolfgang learned the language of all the countries he visited, as they often stayed in each place for several months.

His father, Leopold Mozart, was a respected composer and violinist of the Austrian court. As soon as possible he started to tutor his two children, Wolfgang and his older sister Nannerl, who was also a musical prodigy.

Mozart as a child

Seeing an opportunity to not only educate and travel his children, but to make money off their abilities, he set out across Europe to show off their talent. They set out for Vienna in September of 1761 where the children performed for the prince bishop. At first, payment for their concerts was meager, but as they pressed on with their European travels and concerts, word got around between members of the nobility and their income increased.

There were many difficult journeys in coaches pulled by horses, on muddy roads with storms and illnesses that no doubt resulted from being cooped up for days in a damp coach, erratic bedtimes, and having to eat whatever was available on their travels. Sometimes they had to stop at an inn for several days while Wolfgang or Nannerl recovered from a cold or sickness. During these times Leopold caught up with his letter writing, accounts, and his own musical compositions.

Wolfgang started to pick out notes on the clavier at a very tender age and was soon composing. He wrote his first Minuet and Trio when he was five. It's likely that his father notated this piece for him as Wolfgang's penmanship probably wasn't yet up to the task, but he very quickly began to notate his own music. At seven years old he was quite proficient enough on the violin to write for the instrument. He went on to learn the piano and viola.

After the royal concerts in Vienna, the Mozart family returned home for six months before they took off again. In November 1763 they arrived in Paris - at the time a blossoming metropolis of muddy roads and fashionable people. Wolfgang and Nannerl performed many concerts in private houses as well as in palaces, including Versailles.

It's told that when Wolfgang tried to get a kiss from Madame de Pompadour, she refused, to which he stated “Who is this woman who will not kiss me? Why, the Empress herself kissed me! ” An open-hearted and social boy, Wolfgang loved a hug and a kiss, and seemingly felt that this was his right.

In 1764 the Mozarts arrived in London and remained for a year and a half. Just as in Paris, they gave concerts in public venues as well as in private drawing rooms.

They gave a concert at Buckingham House (later expanded and renamed Buckingham Palace) to King George III and Queen Charlotte. Later, while riding through a London park in his carriage, the King recognized little Wolfgang, walking with his father and sister and stopped the carriage to say hello to them from his open window.

Unfortunately, the English nobility wasn't as generous financially as the French had been. Many times they were presented with gifts such as jewelry and snuff-boxes rather than money. These items held many times more value than the money they were given but were not easy to convert into cash.

Sickness was a constant threat to society in general at that time, but their many travels made the Mozarts particularly vulnerable to illness. In London, Leopold became ill with a bronchial infection which made them stay put for seven weeks longer than they had planned. This gave Wolfgang a period of time to focus on his composition skills and study the works of JS Bach. He was constantly and quickly evolving as a musician with his education continuing on a daily basis.

Leopold decided to invite the public to come and hear concerts at their London apartment - for a fee. Wolfgang performed, improvised and played blindfolded or with his hands covered to increase the entertainment value. Copies of his compositions were sold at the door.

Although this all seems like a difficult life for such a young child so focused on his skills and studies, young Wolfgang seems to have mostly enjoyed it. Once old enough to write letters, they were full of positivity and fun. In one letter he wrote that their carriage driver was a “fine fellow” and that he found their carriage “cozy”. 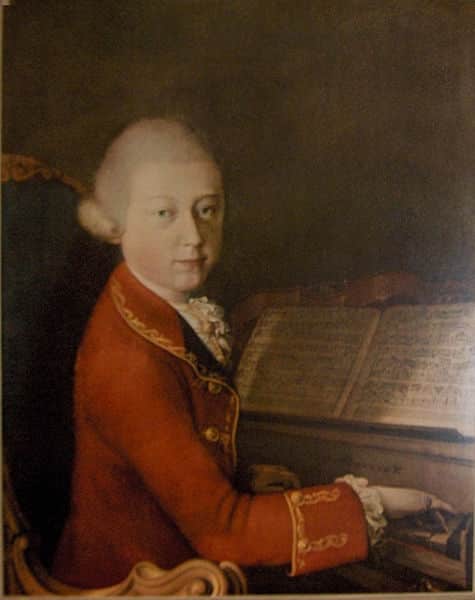 Although much has been written about Wolfgang's immature character, this seems mostly exaggerated. However, there is a lot of evidence that, as a child, he had a great sense of humor and loved a good pun. These traits continued into his adulthood.

In 1767, while in Vienna, there was an outbreak of smallpox. It was a terrifying disease at the time and, although there was a form of inoculation, Leopold was frightened to submit his children to it. Thinking that his wife and daughter were immune from the disease, having had a mild case of it before, he left them behind and took Wolfgang far away. However, both Wolfgang and Nannerl caught smallpox. Children were most vulnerable to death by this disease. Very fortunately, Wolfgang and Nannerl didn't have it too badly and both recovered.

When Wolfgang was 12, he wrote an opera for the emperor of Austria, Joseph II - “La Finta Semplice”. The production of it failed to materialize due to the scandal. Doubt was thrown on whether or not Wolfgang had actually written this ambitious project himself.

The next planned trip was to Italy, mainly for Wolfgang to study Italian Opera, and this time Nannerl was to stay behind with her mother. Although she was also a musical prodigy and a promising composer in her own right, Nannerl was destined for marriage and her musical development stopped.

At the age of 14, the Mozarts arrived at the Vatican in time for Easter celebrations. Upon hearing Allegri's Miserere performed in the Sistine Chapel, Wolfgang was so enamored of it, he wrote the entire work out from memory. Later in the week he reportedly went back to hear it again, to compare what he had written with another live performance.

Finally returning to Austria from all their travels, Wolfgang, at the young age of 16 was offered his first job as Assistant Concertmaster. This gave him the opportunity to explore writing many styles of music, including symphonies, quartets, sonatas, and with this came the development of the beautiful Wolfgang Amadeus Mozart music that we know today.

Artes & contextos
Signed by Artes & contextos, they are articles from multiple authors, or republish articles from other publications and authors, duly identified and (if any) link to the original article.
Latest posts by Artes & contextos (see all)
Categorydisclosure Song Musicians / Bands Personalities World
TagsClassical Music Mozart Orchestra Piano Wolfgang Amadeus Mozart
Harriet Hosmer on Art and Ambition: The World's First Successful Woman Sculptor on What It Takes to Be a Great Artist
RoamCouch in Honolulu, Hawaii