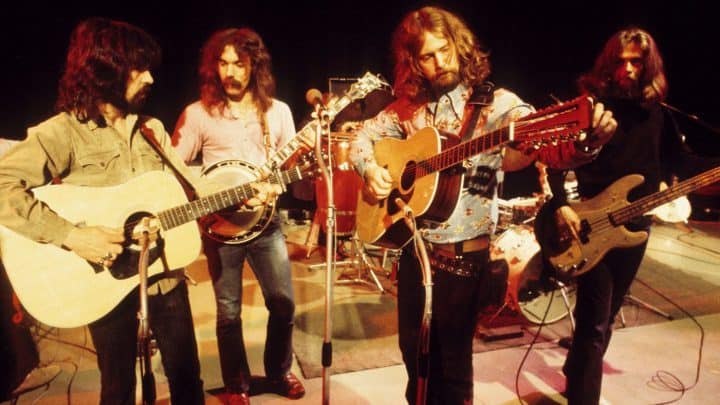 In the mid-Sixties, just as Bakersfield, California, was giving rise to the music of Buck Owens and Merle Haggard, challenging Nashville’s “countrypolitan” sound, so too was the jangly L.A.-based folk-rock of the Byrds beginning to give way to an even more experimental hybrid of country and rock. Founded at the height of Beatlemania in 1964, and leaning heavily on the artistry of songwriter Bob Dylan, the Byrds initially included members Roger McGuinn, Chris Hillman, David Crosby, Gene Clark and Michael Clarke. By the end of 1967, however, only McGuinn and Hillman remained. While they would add Hillman’s cousin, Kevin Kelley, as drummer, it was their next move that would eventually be seen as one of the driving forces behind the expansive musical genre known today as Americana.

Ingram Cecil Connor III was born in Florida and raised in Waycross, Georgia, on the music of Elvis Presley and Sun Records. While briefly studying at Harvard University, he became reacquainted with country music. When he moved to Los Angeles in 1966, the man the world would come to know as Gram Parsons recorded the Safe at Home LP with the International Submarine Band, covering songs by Haggard and Johnny Cash (“Folsom Prison Blues,” “I Still Miss Someone”), along with one of Parsons’ originals, “Luxury Liner,” later cut by Parsons’ one-time romantic and professional partner, Emmylou Harris.

Recruited by the Byrds as a jazz piano player in 1968, Parsons quickly switched to guitar. As recording for the group’s sixth album began, the concept of a wide-ranging double-LP was taking shape, with the idea that several forms of popular American music would be represented, although Parsons was most passionate about exploring country music. On March 9th, 1968, the Byrds entered Nashville’s Columbia recording studios, recording throughout the week.

On March 15th, with the help of their label, CBS Records, the “new” Byrds were (perhaps grudgingly) invited to appear on the Grand Ole Opry, which at the time still took place at the Ryman Auditorium in downtown Nashville. Singer-songwriter Tompall Glaser, who would become part of Music Row’s “outlaw” moment the following decade, introduced the group, who were scheduled to play a Merle Haggard cover and a track from the upcoming album. After performing Bob Dylan’s “You Ain’t Goin’ Nowhere,” which featured the iconic Lloyd Green on steel guitar and would be the opening track on Sweetheart of the Rodeo, Gram Parsons announced that instead of the planned “Sing Me Back Home,” they were going to play yet another track from the LP. He then dedicated their performance of “Hickory Wind” to his grandmother.

While their break with Opry protocol may have caused some friction, in a 2010 interview with the Nashville Scene, Roger McGuinn downplayed the incident, saying, “There were indeed some folks attending. . . who didn’t seem to appreciate how sincere we were in doing country music. You have to remember, it was during the Vietnam War and we were perceived as hippies. But backstage was different. Skeeter Davis took us under her wing, and she was very kind.”

Sweetheart of the Rodeo was released in August 1968, and although fairly well received at the time, it has since gone on to be considered one of the key moments in the birth of country-rock, and in the Americana movement, as well as one of the greatest albums of all time.

Parsons’ tenure in the Byrds was short-lived as he and Hillman soon left to form the Flying Burrito Brothers, taking their country-rock hybrid to yet another level. Parsons died of a drug overdose in September 1973. He was 26.

The post: Flashback: The Byrds Flip the Opry Script, was published at: Rolling Stone

No Thoughts on #thebyrds – Flashback: The Byrds Flip the Opry Script – @Rolling Stone0 (0)