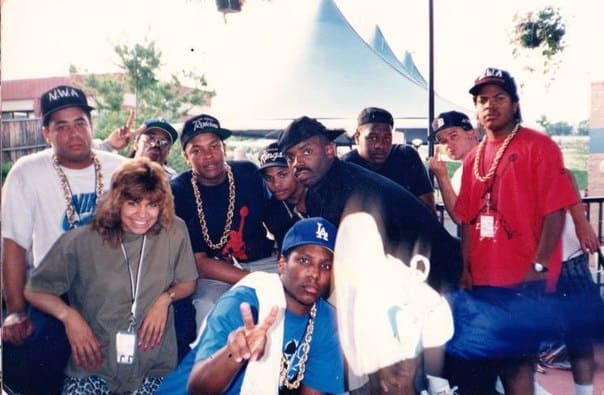 In 2015, N.W.A.’s story was told through the F. Gary Gray-directed film, Straight Outta Compton. With that, the group that has been in factions since 1989 made steps towards reunion. Although the platinum group’s founder, Eazy-E, died in 1995, the surviving four members appeared together through the film’s summer ’15 promotion.

What has yet to happen, however, is a full on-stage reunion. Following Dr. Dre’s 1999 album 2001, the corresponding Up In Smoke Tour included Dre, Cube, and MC Ren. N.W.A.’s DJ/producer DJ Yella did not participate. In 2015, Ren, Cube, and Yella appeared together at the Staples Center. Dr. Dre, however, did not attend.

Speaking with The Talk on Friday (January 15), Ice Cube said that may change. While promoting Ride Along 2, Cube (who co-produced Straight Outta Compton; his son O’Shea Jackson, Jr. stars), reflected on the film’s award-winning success. “I’ve got some tricks up my sleeve. I can’t reveal it all, but I’m trying to bring the members of N.W.A. together,” said Cube nearly seven minutes into the interview. “[I want to] give everybody a little history lesson on N.W.A., Ice Cube, Westside Connection—everything I’ve been doin’. We’ll put up some great visuals; it’s gonna be a great night.”

N.W.A. will reunite the same night that 1980s Rock & Roll legends Guns N’ Roses will also be reuniting at Coachella. Notably, both Los Angeles, California acts were planning on touring together at the height of their success. In 2013, DJ Yella spoke at length as to why the Ruthless Records hit-makers turned down touring the world with Axl Rose, Slash, and the rest of the gang.

The four living members of N.W.A. have not performed together since 1989. Westside Connection, Cube’s platinum-selling group with WC and onetime protege Mack 10, has been disbanded for a decade. The Priority Records act released two albums. While Dub remains Cube’s touring partner and often his hype-man, Mack 10 has been estranged from the pair for more than a decade. The group has never publicly stated the reasons for the break-up.

Also in the interview, Cube spoke about N.W.A. becoming the latest Hip-Hop act to be inducted into Cleveland, Ohio’s Rock & Roll Hall Of Fame. “They finally get it,” said Cube, alluding to the resistance N.W.A. received in their day from the greater music community. He called the induction “vindication.”

At 2016 Coachella, A$AP Rocky, and LCD Soundsystem are also among headliners.