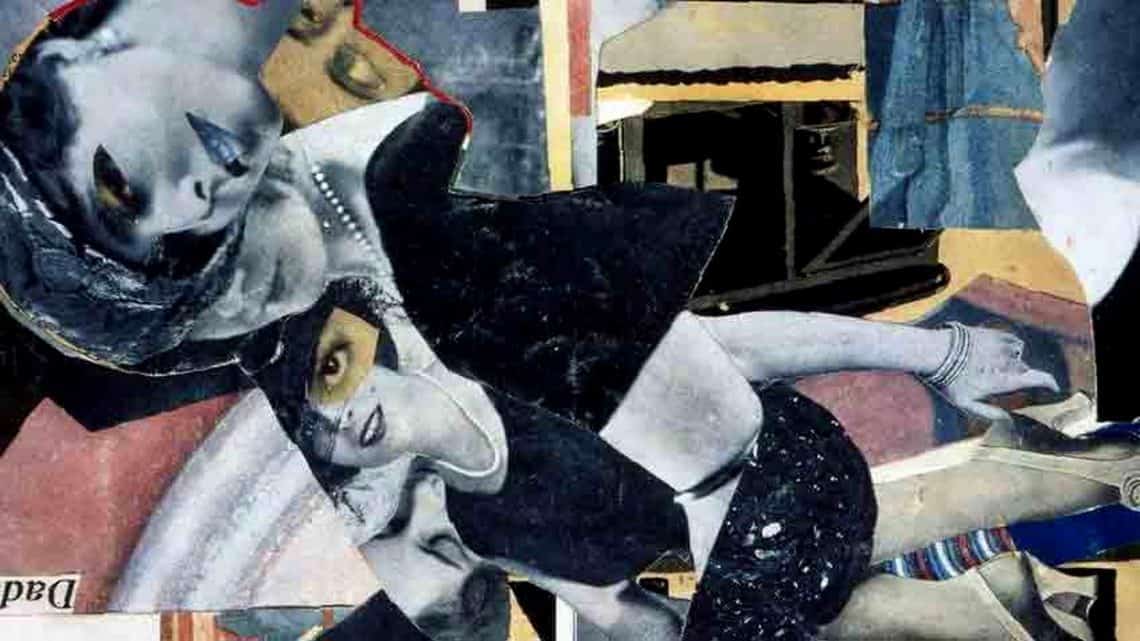 What is Dadaism or Dada Art?

Dadaism, Dada Art, and a Dadaist

A question often asked with a lot of curiosity – What is Dadaism – and the process of understanding it is going to be an exhilarating experience!

The beginning of art is intertwined with the start of human life itself.  Hardly can human life be discussed without traces of art included.

Art covers virtually everything about the world, both living and non-living. It is the means of expressing one’s thought, belief, feelings or perception through creative prowess or skill exhibited in painting, writing, music, dancing and even communication. 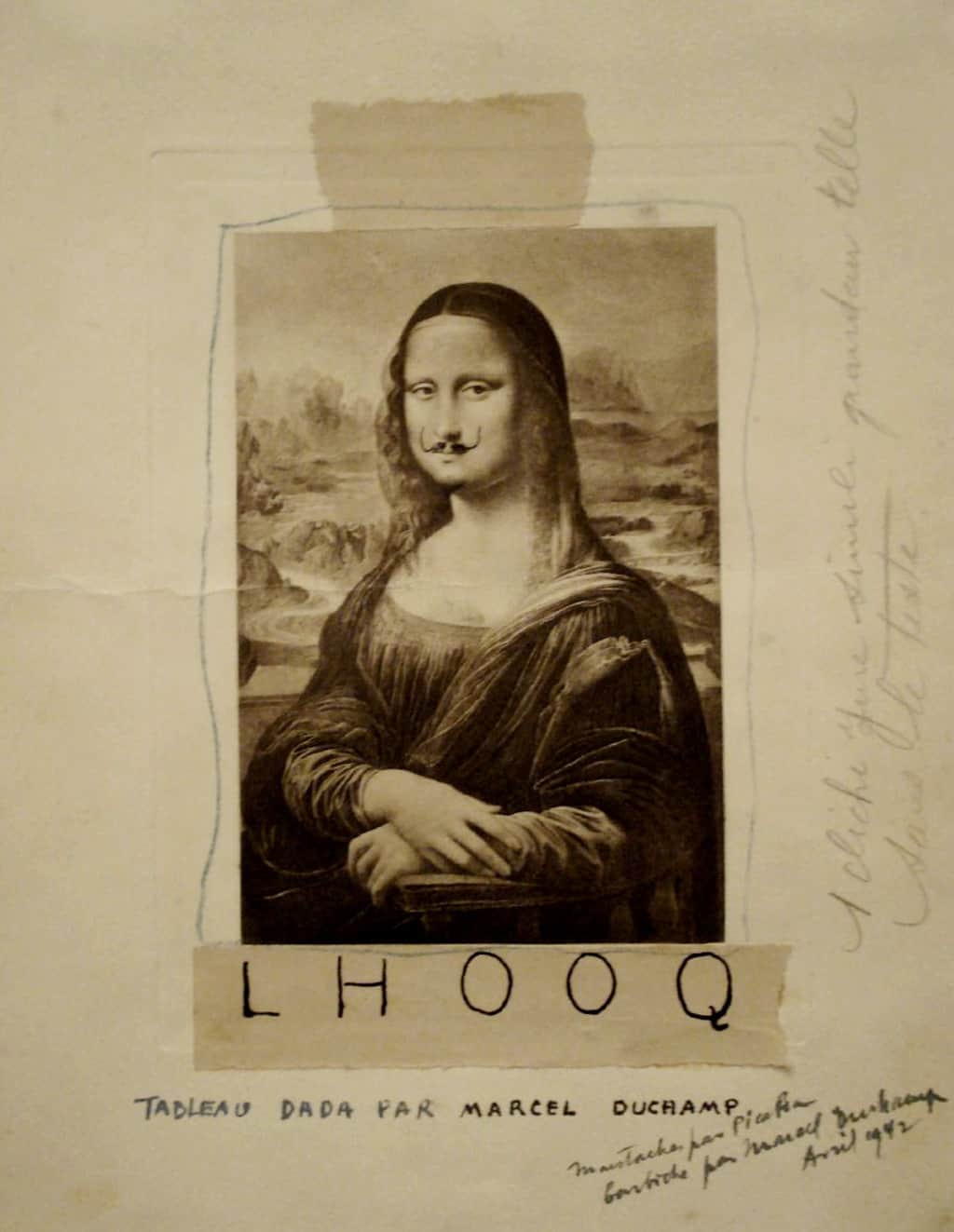 Art brings out the creativity embedded in humans. A beautiful morning can serve as a source of inspiration for a poet. He can write a masterpiece through that inspiration. The poem is an art. It is expressing something.

As far as art is concerned, its primary aim is to pass across a message. A painting can be breathtaking. A poem can be touching. A song can be enchanting.

However, behind the beauty of these arts, lies a message to be passed.

Hence, art is not solely concerned with aesthetics. It is an embodiment of message.

Art is wide. Sculpture, painting, music, designing, fashion… are under the umbrella of art. Among the concepts enshrined in the household of art is Dadaism.

What is Dadaism, Dada Art, or a Dadaist?

Art is dynamic. Art has many definitions. It changes over a period of time. Its changes from one period to another owes to the difference in the way of life of people in different epochs.

The definition of Dadaism is revolving around the incidents occured during its origin.

It is a movement because it is an art form spearheaded and adopted by a group of artists with a similar philosophy and style at a particular period.

Every art movement has a focus. Dadaism is not an exception. As a movement, Dadaism opposes the surge or the uprising of capitalism culture. This movement sees art in the danger of being degraded. Hence, Dadaism aims at creating a new art different from all other preceding arts (which have been degraded anyway). Dadaism, therefore as an art movement, is an art style shared by artists with similar thought, orientation and goal – challenging the capitalistic notions of the society

Dadaism or Dada art is anarchical.

It deviates from the style of preceding arts. In fact, it was termed as an “anti-art” by Marcel Duchamp.

Despite the fact that Dadaism is an art, yet it opposes art itself by questioning it. So, when glanced at, Dada art may appear meaningless or even absurd. And that is where its potency lies, absurdity.

The central weapon of Dadaism is absurdity.

Through creative absurdities, dadaists protest and frantically react against the frivolities that encapsulate the modern world. Just as the modern world it protests against is absurd (to Dadaists), Dada art is coated in absurdities to express the very ridiculousness of modernity.

Due to the defying nature of dadaism to art convention, dadaists often attempt to make newer forms of arts. A typical example of Dada art that defies art convention is Man Ray’s art piece termed “gift.” He presented this art piece to Erik Satie during their first meeting. Conventionally, an art piece takes hours, if not days, to accomplish and bring up to an aesthetic level of admiration by the audience.

However, Man Ray finished his art piece titled “gift” by simply sticking some tacks to flatiron with some glue. He then presented it as a gift to Erik Satie. Man Ray finished his art piece in no time compared to the standard time required of a conventional art piece. Anyone can virtually join some things together and christen it a fanciful name. But can such person’s piece be seen as art? Ray’s “gift” faced this particular criticism by art critics.

However, the absurdity, meaninglessness or the “artlessness” of Ray’s art piece “gift” is exactly what made it be a perfect Dada art piece. Quite funny, isn’t it?

That is the way of Dadaism.

An artlessness in artfulness.

The term “dada” was invented by the Roman writer, Tristan Tzara (1896–1963) at Hugo Ball’s Cabaret Voltaire in Zürich, during one of the meetings held by a group of artists in 1916. “Dada” is a colloquial French word which means “hobby-horse.” 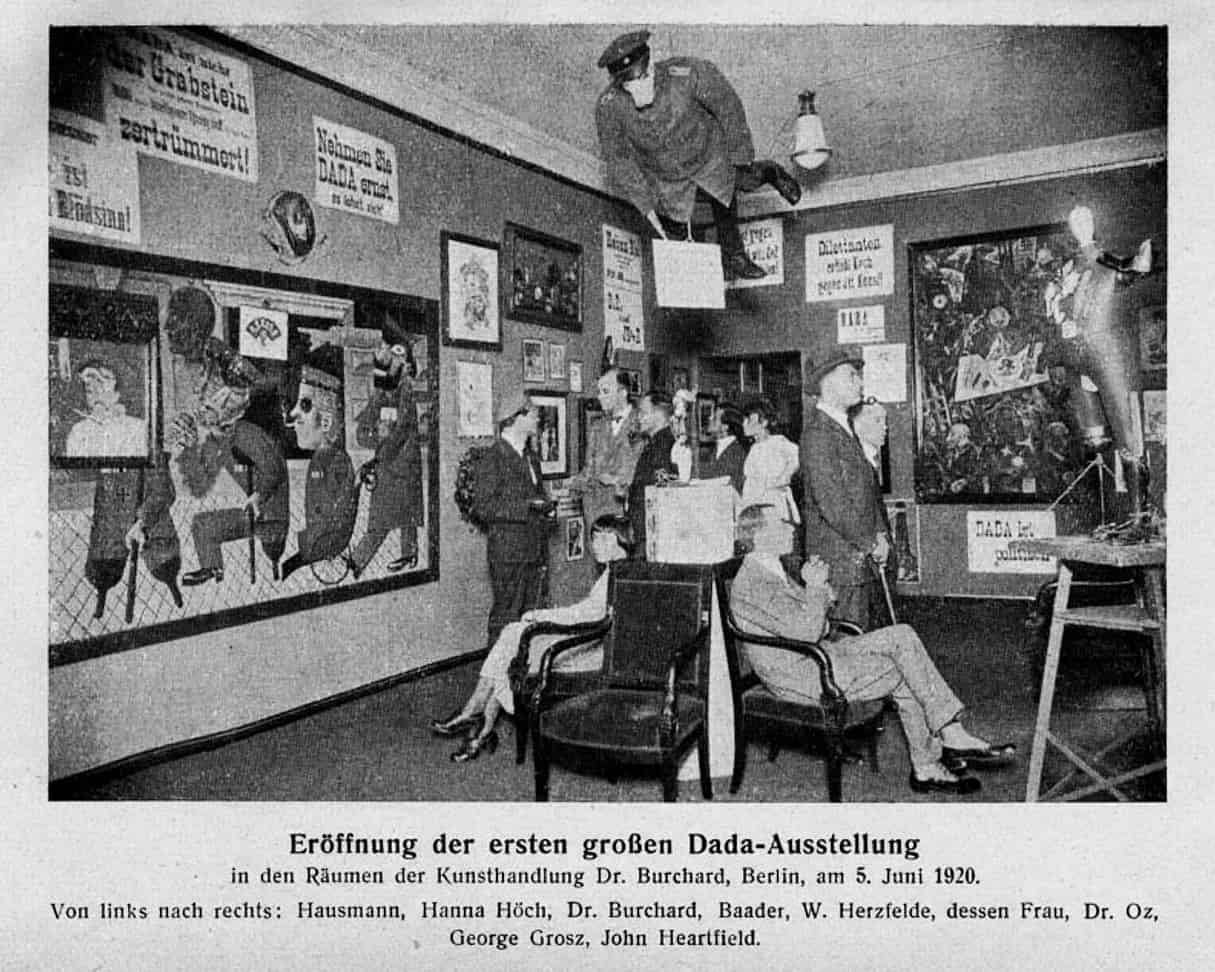 Dadaism sprang to life as a form of protest against the absurdity and ridiculousness of modernity.

Dadaism as a movement began during the early hours of 1910s. Artists of this movement through their works ridiculed the meaningless and baselessness of the modern world. Due to the “controversial” nature of Dadaism, it was seen as an art movement that is against the standard and norms that the society stands for.

One major factor that facilitated the start of Dadaism was the World War 1 between 1914 – 1918. The first World War cost the lives of millions of people, with millions wounded. The traumatic effect of the first World War is the loss of reality by Europe as stated in the words of Dickerman:  “World War I produced a collapse of confidence in the rhetoric—if not the principles—of the culture of rationality that had prevailed in Europe since the Enlightenment.”  This loss of reality gave way to confusion.

Dadaism aims at making humor out of this confusion through parody.

Furthermore, refugee (European) artists and intellectuals who were affected by the World War I started Dadaism in Zurich. They saw the war as being meaningless and baseless.

Dadaists employed absurdity as a weapon to attack elites who were perceived to support the war. Several factors influenced the start of Dadaism.

Concepts such as expressionism and futurism are some of these factors. However, the strongest influence on Dadaism is the World War 1, which dadaists saw as an unfair and meaningless war. Dada arts are expressed in music, sculpture, painting, literature and photography. All these arts aim solely at ridiculing and provoking political elites supporting the war.

You may like to know What is Art? Why is Art Important?

This idea is of the view that art will be meaningful and worthwhile if and only if it is spontaneous.

It emphasizes on the keen relationship that must exist between an artist and his works.

The beauty of an art work is not something to be judged by the system, rather, it is a subjective judgment of the artist. Tristran Tzara even wrote that literature is never beautiful because beauty itself is dead. Hence, beauty should be left as a private affair to the artist. Spontaneity makes appeal largely to the concept of individuality. Spontaneity is Creativity

This idea aims at contrasting or negating art conventions and establishment through the spread of demoralization.

This idea sees no line of difference between the moral standard of goodness or badness. Good is in no way different from the bad. It sees everything with one view: as being irrelevant. Nothing is relevant. Even man is of no importance. This idea sees the relevance of everything as being imaginary and unreal.

This is perhaps the best idea that captures the framework of Dadaism. As an idea, absurdity is one of the major tools or weapons used by dadaists to ridicule or make sarcasm. This idea sees everything as being absurd and ridiculous in the end. Paradox permeates everything, with everything having opposition to harmony. Tzara in his “Dada Manifesto 1918” expressed this clearly:

I write a manifesto and I want nothing, yet I say certain things and in principle I am against manifestos, as I am against principles. I write this manifesto to show that people can perform contrary actions together while taking one fresh gulp of air; I am against action: for continuous contradiction, for affirmation too, I am neither for nor against and I do not explain because I hate common sense. Like everything else, Dada is useless.

Dada artists are especially known for their use of ” readymades.”

“Readymade” is the artistic manipulation of normal everyday object by the artist and then presented as an art.

Ready-made triggered questions that pertain to the creation of art, it’s meaning, what it stands for and its relevance in the society. Furthermore, Dadaism paved the way for the ushering in of Surrealism, another modern art movement.

There are many important Dada artists. who have articulated the definition of Dadaism. Some of them are:

1) Marcel Duchamp (1887 – 1968). His readymades included a humorous and cheap reproduction of Mona Lisa with a mustache and goatee, the fountain and a bottle rack. 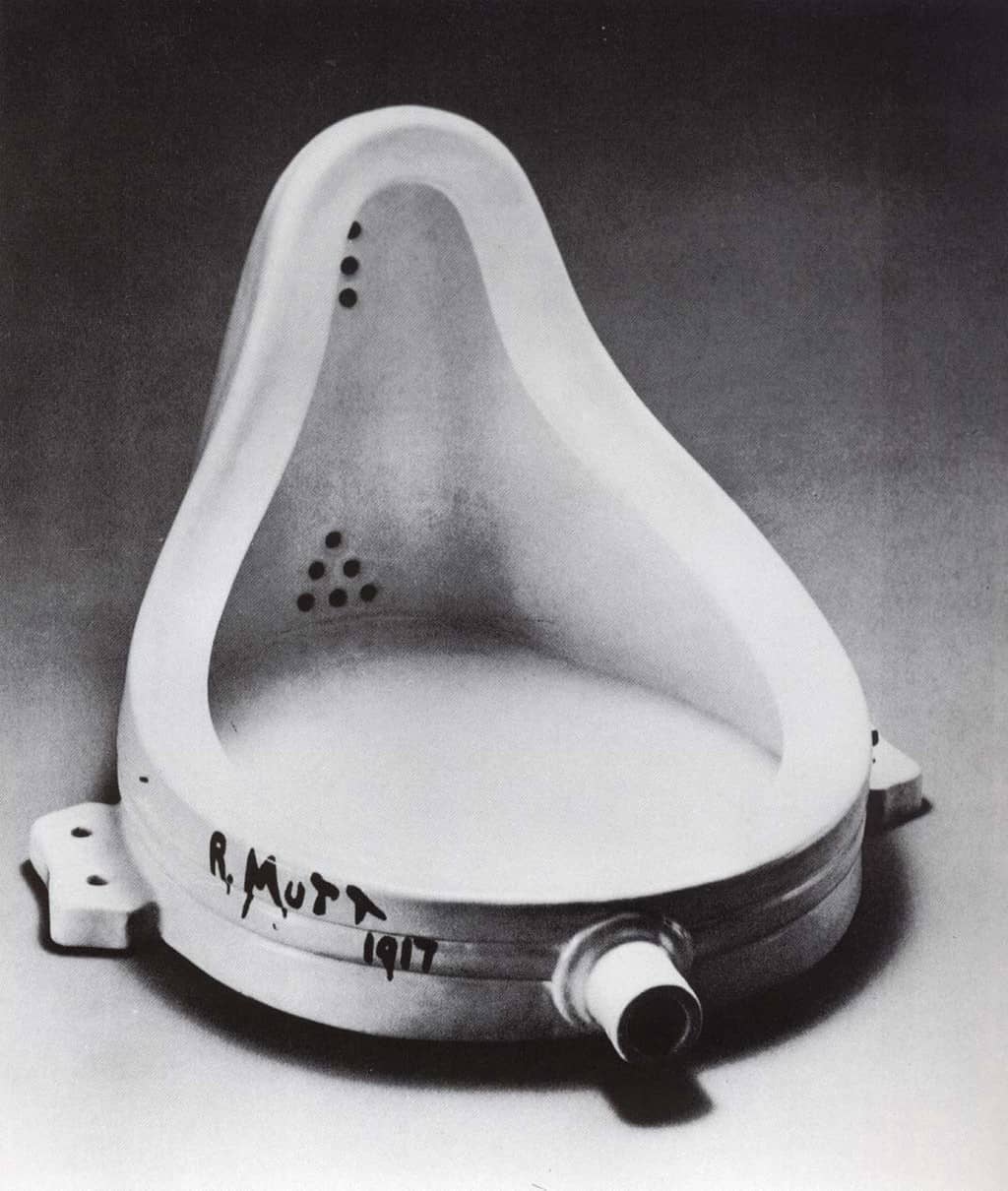 This art piece was also produced by Marcel. It is a ready-made involving a cheap reproduction of Leonardo’s “Mona Lisa.” Marcel added a mustache to the portrait and inscribed the title “LHOOQ.”

THE SPIRIT OF OUR TIME.

A Dada art piece produced by Raoul Hausmann, a German artist. It is a notable work highly recognized. 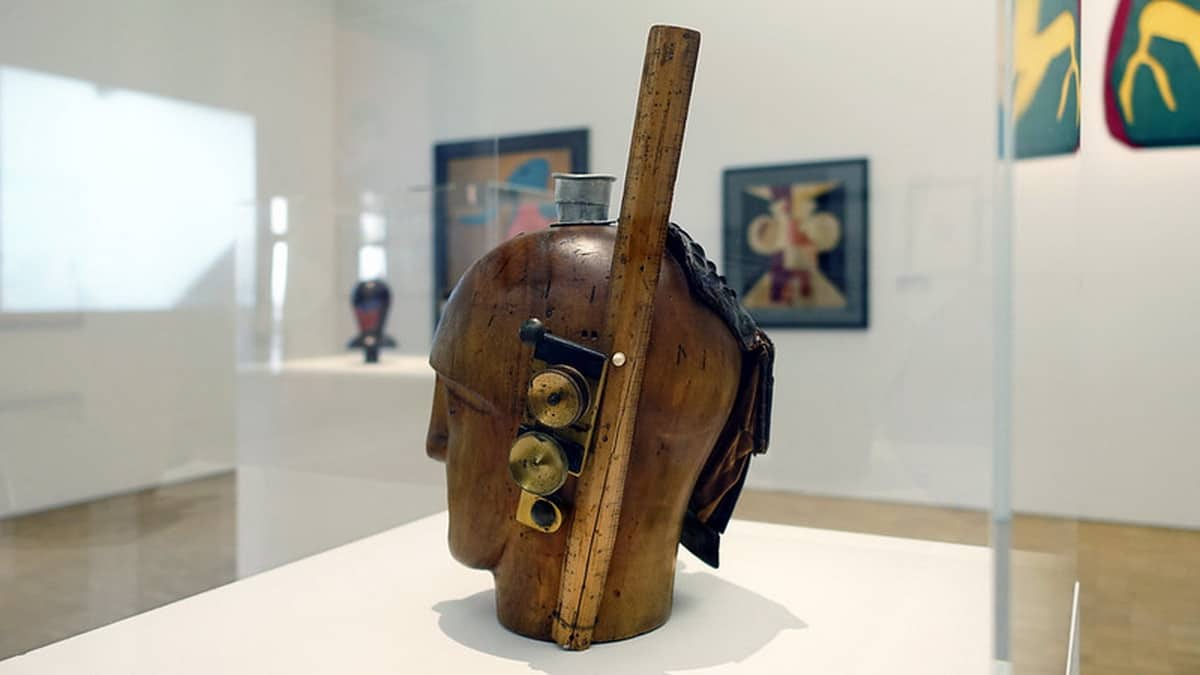 Raoul Hausmann, Mechanical Head The Spirit of our age, 1921 ©  flickr

UNTITLED (SQUARES ARRANGED ACCORDING TO THE LAWS OF CHANCE, 1917)

A Dada art piece highly recognized. It was produced by Jeans (Han) Arp in 1917.

THROUGH THE LAST WEIMAR BEER BELLY CULTURAL EPOCH OF GERMANY (1919)…

A Dada artwork produced by a German woman named Hannah Höch. It is considered one of the greatest works in Dada arts.

Dadaism as art despite its seeming offensive and artless nature, is funny and humorous.

It spread to many other parts of Europe after its start in Zurich. Although, it eventually declined at some point, because right from the onset, it was obvious that it cannot hold on for long. However, Dadaism opened the door for a new concept in modern art. This new concept is Neo-Dadaism. It is a “new” form of Dadaism.

Neo-Dadaism is an art movement with artistic manifestations with audio, visual and literary concepts.

It has strong ties with Dadaism. It shares similar thought, method, intent, and technique with artworks in Dadaism. Its aim is to bridge the gap that exists between art and daily experiences.

Neo-dada employs the use of materials that are modern and also absurdist contrast. Neo-Dadaism takes its lead largely from the works of Marcel Duchamp and Kurt Schwitters. It totally denies traditional conceptions of aesthetics.

Dadaism is an artwork that outlives its time.

Its relevance can still be felt in the world of art, especially the internet. Memes which are used as communication cues stem from dadaism. Fashion is not left out. Dadaism has its touch there. In music, literature, sculpture, painting and even technology,

Dadaism still thrives and lives on.

Despite its seemingly meaningless state, it found a way of nesting itself in the hearts of people. This shows the power and awe that Dadaism carry. Undoubtedly, Dadaism is not just an art, but it is an art with a soul, a living art.

O artigo: What is Dadaism or Dada Art?, foi publicado @The Artist – Art and Culture Blog.

The post: What is Dadaism or Dada Art?, appeared first @The Artist – Art and Culture Blog.