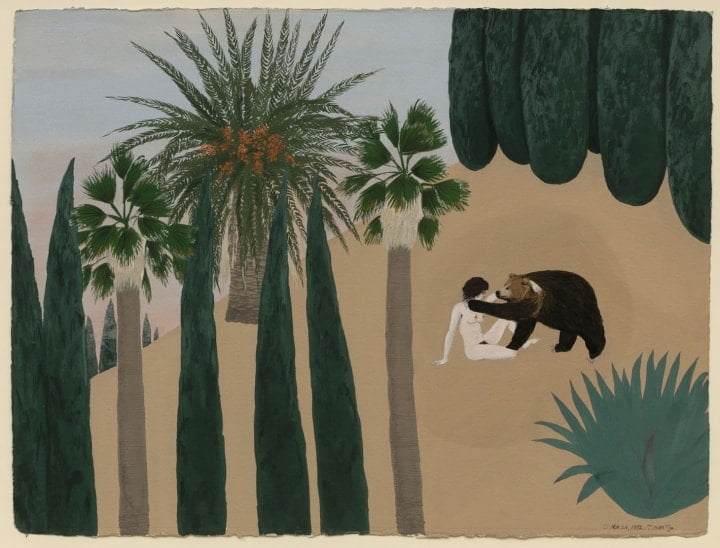 Who needs Henri Rousseau when there is Mira Schor? In her current exhibition at Lyles & King titled California Paintings: 1971-1973, Schor presents drawings and paintings that explore and redefine female wildness and the erotics of nature, produced during her time at CalArts in California. Originally from New York City, Schor belongs to a generation of artists that practiced feminist art long before it was established as a term. After receiving her undergraduate degree from New York University, Schor enrolled in the CalArts Feminist Arts Program led by Judy Chicago and Miriam Shapiro, and participated in the famous Womanhouse exhibition of 1972. The works exhibited at Lyles & King speak to the stark differences in art production between the West and East Coasts at the time, the first privileging narrative and color over the theory-driven dryness of the latter.

The most fascinating body of work on view is a series of paintings, coined by Schor as her “Story Paintings,” which depict partially and fully nude women roaming around brightly lush nature with wild animals. The bear in particular keeps turning up, wrapped in an intimate embrace with a nude woman in one painting, and seemingly spewing blood in the next, while the woman hides behind a tree, placing her bleeding hand behind her back. Schor’s fascination with the flora and fauna of her new California surroundings is palpable, but the significance nature holds for the artist also stems from the many summers she spent in Provincetown, which she remembers as having been formative to her practice. In an interview with the Brooklyn Rail, Schor notes that she has an “animistic view or perception of the world.” It is this relationship between the female and the animal that I find most interesting.

Consistently placed in the tamed realm of domesticity, women are rarely depicted inhabiting the wilderness. Contrary to the controlled and passive domestic environment, wilderness signifies disorderly, unruly, and unexpected ways of being — wild ways, as Jack Halberstam has described the experience of being queer or “other” in this world.

In literature, the characteristics of wild animals have often been attributed to women in order to convey their madness, hysteria, and all-around strangeness. When first confronted with the “mad,” Bertha Mason, the protagonist in Jane Eyre, describes: “What it was, whether beast or human being, one could not, at first sight, tell. It groveled, seemingly, on all fours; it snatched and growled like some strange wild animal; but it was covered with clothing, and a quantity of dark, grizzled hair, wild as a mane, hid its head and face.” Similarly, in Charlotte Perkins Gilman’s iconic short story The Yellow Wallpaper, the main character creeps around on all fours, showcasing her identification with animal behavior. These women are portrayed as animals in order to emphasize that they are diseased, and that they fall outside of the dominant patriarchal society.

The correlation between animals and women has been extensively addressed by Carol J. Adams in her pivotal 1979 book The Sexual Politics of Meat, in which she argues that women have experienced the same objectification and fragmentation that animals have, often presented as pieces of meat to be consumed by those who believe they are the superior species. Intriguingly, the pairing of women and animals has also seeped into the fashion industry, as various campaigns show models interacting with wild animals, such as Cara Delevingne posing with an owl for a Mulberry shoot, and Lara Stone sharing her bed with a wolf for Vogue. There are various ways to interpret these images. On the one hand, they exotify both the female and animal as the untamed other; on the other hand, they portray women as empowered by animals, the way that Game of Thrones’ Daenerys Targaryen is empowered by her dragons, or Sansa Stark by her wolf — thereby enforcing female comfort with all things wild.

Schor’s extraordinary body of work reclaims the relationship between the female and the animal as one of power. In this sense, her visual exploration of female wildness recalls the works of Latin American female surrealists, such as Leonora Carrington, Maria Izquierdo, and Frida Kahlo. In his 1980 book About Looking, John Berger writes that “the life of a wild animal becomes an ideal, an ideal internalized as a feeling surrounding a repressed desire. The image of a wild animal becomes the starting-point of a daydream: a point from which the day-dreamer departs.” Indeed, depicting the animal can be viewed as a space for female wandering, carving out a freedom of movement that women could not find elsewhere — a way of exiting domesticity and entering the realm of wildness usually reserved for men.

Schor shared her love for Provincetown with the renowned poet Mary Oliver, who passed away earlier this year, and spent the majority of her life wandering around Provincetown’s nature with her notebook in hand. I cannot help but end with a quote from Oliver’s famous poem, “The Summer Day”: “Tell me, what is it you plan to do with your one wild and precious life?”

No Thoughts on Mira Schor Shows a Powerful, Liberating Relationship Between Women and Animals0 (0)