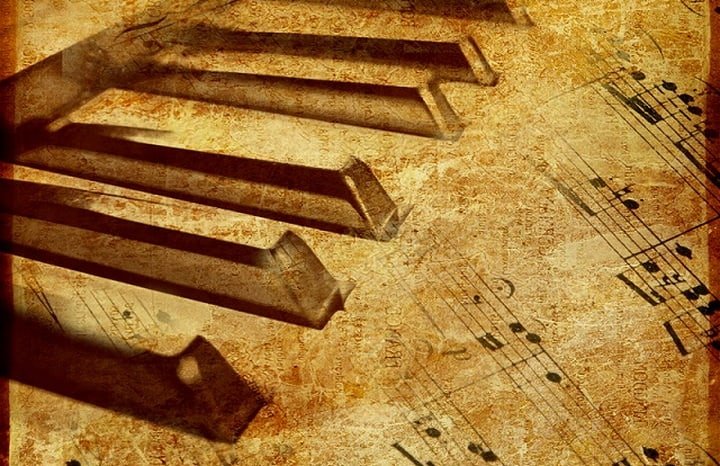 The history of Western Classical Music can be broadly divided into the following periods; Medieval; Renaissance; Baroque; Classical; Romantic and Modern. In this article, I am going to explore these key periods of music and highlight some of their musical features and their most prolific composers.

Far from the often dull and dark impression that films present of this period of Western History, the abundance of music, poetry and art was richly impressive. Much of the music of the period centred around the Holy Christian Church with early sacred music being used to serve Biblical texts. Settings of the Latin texts would have been largely monophonic, meaning a single line of melody, that was intended to be sung by men. This, as the music developed through the period, gave rise to the beginnings ‘polyphonic’ (many sounds/melodies at once) music through what is known as ‘plainchant’. Plainchant, often referred to as Gregorian Chant after Pope Gregory the first, allowed the voices to sing the settings of the Latin text in parallel octaves and fifths that corresponded to the natural range of male voices.

The Renaissance Period was one of the most exciting in Western Musical History. Polyphonic music, as well as instrumental music, became firmly established. With the rise of the Medici family in Italy, the violin developed from the viol, and the world of Art exploded in a literal rebirth. Alongside the emergence of new musical instruments came the popularity with composers of purely instrumental compositions. Suites of music written only of instrumental groups became established. Choral music still was a dominant force and from this period came some of the most elaborately beautiful music ever composed.

New forms of secular music mirrored life at Court with elaborate dances from across Europe and a diverse and colourful harmony based on modes. This modality was in sharp contrast to the earlier music of the Medieval Period and supported the new complexities of polyphony allowing composers to fully exploit their ideas without restrictions from the Church.

Towards the end of the Renaissance period ‘modality’ began to break down. Instead, a move began towards the tonal system we know well today. Similar to the art and architecture of the time, Baroque music was opulent, ornate and gilt-edged. Sacred and secular music were of equal importance. Musical structure developed directly from the work of Renaissance composers and included the Suites, Sonatas; Concertos; Concerto Grosso; Masses; Oratorios and Opera.

In this period of music, the orchestra began all be it with modest forces of around 25 players. Keyboard music other than organ music grew through the harpsichord and the works of Bach. The ‘fugue’ as a polyphonic composition became extremely popular allowing the textural and harmonic complexities of composers ideas to be fully explored in new and exciting ways.

The Classical Period of Music came in direct opposition to the Baroque. The complexities and frills of Baroque music were gradually replaced by music that was streamlined, uncluttered and with an increasing focus on musical development. Composers of the time looked back to the principles of the Ancient Greeks, for example, modelling their compositions on regular, measured principles. During this period the Concerto and Sonata became dominant musical forms as the developments in instrumental music and instruments, progresses. The Symphony as a musical concept is created from the ‘suite’ and orchestral music is truly formed. The orchestra itself grows in size to around 60 players by the end of the period.

As the build quality of instruments advances, the rise of the virtuoso performer/composer becomes a feature of the period. That, in turn, facilitates the evolution of ‘sonata form’ as a crucial musical structure that allowed composers to more fully explore and exploit their ideas. The Piano replaces the harpsichord as the preferred keyboard instrument leading the way to the abundance of wonderful solo sonatas, concertos and additional works for the instrument. Opera in both comic and tragic forms is commonplace with Italian as the principal language. The String Quartet becomes established.

As the Classical period wanes, Beethoven is the one composer who almost single handily ushered in the new musical period. This period of music sees immense advances in musical thinking. Many of the old Classical forms and structures become magnified. Symphonies, Sonatas and Concertos, extend to longer durations with a strong focus on musical development and virtuosity.

The Symphonic “Tone Poem” emerges directly from the symphonic tradition. Heroism, poetry, the complexities of human suffering and redemption regularly govern the work of the Romantic composers. Opera, Oratorio, and the Mass continue as popular forms but pushed to their musical limits. (The “Ring Cycle”, by Wagner lasts some 24 hours for a complete performance). On a smaller scale chamber, music sees an ever more diverse range of ensemble options that brought forth remarkable musical invention. “Lieder” (Songs) or Song Cycles become an intensely expressive musical form exemplified by the works of Schubert; Schumann and Wolf.

In this final period of music, everything changes. Towards the end of the Romantic Period ‘tonality’ begins to offer too few options for some composers. Arnold Schoenberg develops a 12-tone composition method (serialism) that leads to a completely new form of music that is based on dissonance, and extremes of expression. Alongside this, the music of the Romantics continues, particularly in England with the works of Elgar, Finzi and Holst.

In France, the ‘Impressionist’ movement is driven by the compositions of Debussy and Ravel that encompasses the musical world of the East. This movement alone has produced some of the most strikingly imaginative compositions ever written. Later, the rise of electronic music in the 1940s opens new musical doors for many composers and leads directly towards the music of today. Other musical genres including Jazz have a deep impact on the music from America, especially on composers like Bernstein, Copland and Ives.

No Thoughts on Brief History of Classical Music Periods0 (0)