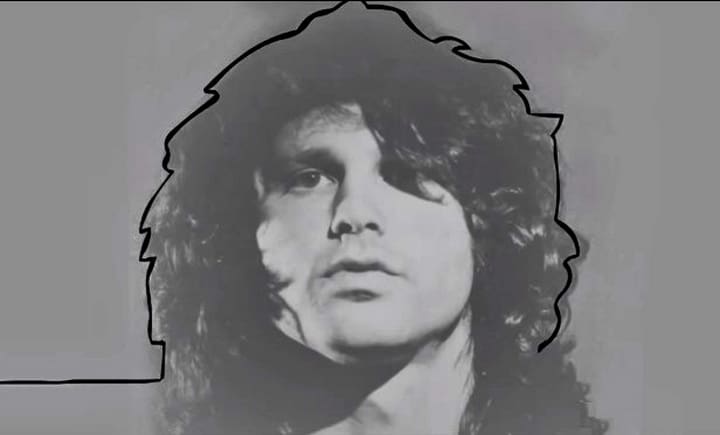 Jim Morrison Declares That “Fat is Beautiful” …. And Means It
0 (0)

There’s a bit of cognitive dissonance in a young rock god giving voice to the fat pride movement some four decades after his death.

The musician’s drug of choice—alcohol—swiftly added some extra cushioning to the sexy, shirtless young lion image photographer Joel Brodsky managed to capture in 1967.

That lean, leather-panted version is the one the Morrison director Patrick Smith went with for the Blank on Blank animation above, using audio from a 1969 interview with the Village Voice’s Howard Smith (no relation).

Occasionally animator Smith balloons the 2-D Morrison’s belly for humorous effect, but let’s be frank. By today’s standards, the 5’11 Morrison, who by his own estimate tipped the scales at 185lb, was hardly “fat.”

Eating (and drinking) like someone whose bank account didn’t require belt tightening.
His compassion toward generously proportioned bodies likely sprang from early experience.

He … told me that he’d grown up as a fat kid that no one wanted to know and that this had caused him a lot of emotional pain.

Then he explained what had brought it all to the surface. Apparently he had been walking around Greenwich Village that morning and a girl who he knew as a child had spotted him and started going crazy over him. That bothered him because he sensed the hypocrisy of it all. When he was a fat military brat these people had rejected and ignored him but now, because of his new public image, they were fawning over him.

That “new public image” is the one most of us think of first when thinking of Jim Morrison, but as a flesh and blood exemplar, it was unsustainable. Photographer Brodsky reflects:

The shot on the inner sleeve of the Greatest Hits album was pretty near the end, I think. By that time, he was so drunk he was stumbling into the lights and we had to stop the session. Morrison never really looked that way again, and those pictures have become a big part of The Doors’ legend. I think I got him at his peak.

Morrison didn’t dwell on childhood miseries in his Village Voice interview, nor did he show any self-loathing or regret for physiques past.

Rather, he gave voice to the positive effects of his increased size. He felt like a tank, a beast—a body of consequence.

(To consider the implications of bodily size for a female in Morrison’s world, have a look at cartoonist Pénélope Bagieu’s California Dreamin’: Cass Elliot before the Mamas and The Papas.)

Harriet Hosmer on Art and Ambition: The World’s First Successful Woman Sculptor on What It Takes to Be a Great Artist
0 (0)

No Thoughts on Jim Morrison Declares That “Fat is Beautiful” …. And Means It
0 (0)