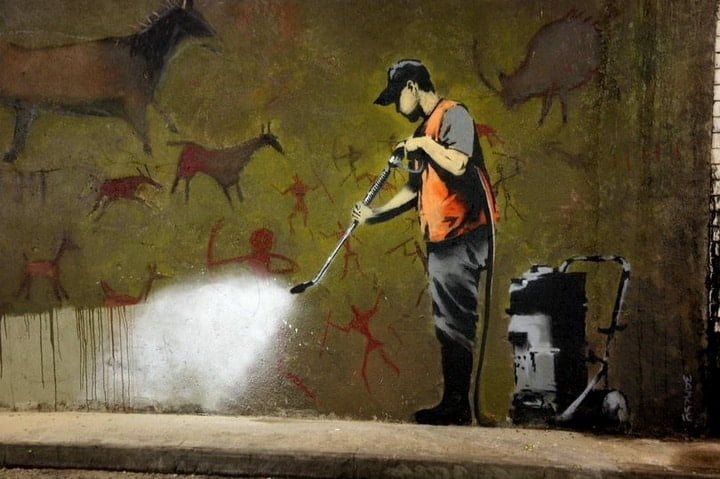 Underneath Waterloo station in South London there’s a disused road tunnel called Leake Street where taxis used to queue for passengers on the Eurostar train.

Apart from London cab drivers no one had heard of – or cared about – this dark and damp tube of brick and tiles. All that changed on May Bank holiday weekend in 2008 when the graffiti artist Banksy showed up with an exhibition he called the Cans Festival (yes that’s spray cans not Cannes in the South of France – get it?)

A week beforehand the mysterious artist sent a message out to a select group of about 40 like minded ‘street artists’ from around the world – they needed to be in London to help Banksy and no one was going to turn down an invite from the biggest name in graffitti.

2008 was a big year for London and the world. The iPhone had just been launched – most people were still calling on fat Nokias or even using landlines. While Facebook and Twitter existed user numbers were tiny and Instagram was still two years away. Come September 2008 global stock markets would crash and banks would need billions of our money to bail them out.

As Banksy sent his call to arms Mercy by Duffy was number one in the charts. London had been suffering a knife crime epidemic, the Chinese government had been suppressing democracy protests in Tibet and and Prime Minister Gordon Brown had just seen his Labour Party hammered in the local elections by a Tory party run by David Cameron . His fellow Tory Boris Johnson was hatching a plan to become London Mayor.

On 24 April Leake Street was boarded up with a sign warning people to keep out as it was ‘closed for essential maintenance work’. No one would have suspected the mega-star spray painter was behind the hoardings with a group of fellow artists creating soon-to-be famous, albeit temporary, works of art.

One of those on Banksy’s invite list was Charles Uzzell-Edwards who paints under the name ‘Pure Evil’.

He explained: “No one knew what it was but it was coming from Banksy and it was going to be big.

“Then we got the call to meet at a hotel and everyone was brought into a conference room where we were shown plans of Leake Street and how they planned it would look – everyone was allocated a bit of wall to work on.”

“I went back to my studio to pick up my paint and stencils and before I knew it I was painting with Banksy working a few yards behind me.

“It was an extraordinary moment – many great artists from all over the world had come together, looking back I guess it was a seminal moment, whatever that means.

“There were the guys from Massive Attack (Robert Del Naja), Blek le Rat, these were huge names and everyone worked through the night – the opening party was quite something.

As Uzzell-Edwards hints at this wasn’t a bunch of kids showing up to make a mess of some walls – this was planned and with permission of the tunnel’s owners, hotel rooms had been booked, security was in place and of course a few words were released to the press the day before it was opened to the public to tempt them in.

Banksy said: “Graffiti doesn’t always spoil buildings, in fact it’s the only way to improve a lot of them.

“In a few hours with a couple of hundred cans of paint, I’m hoping we can transform a dark, dirty, neglected hell hole into an oasis of beautiful art.”

“I’ve always felt anyone with a paint can should have as much say in how our cities look as architects and ad men.

So getting to cover an entire street with graffiti is a dream come true, or as some people might call it — a complete and utter nightmare.”

As well as well established artists, Banksy picked a few unknowns to come along – among them was a young Portuguese artist called Alexandre Farto who paints under the tag Vhils. He was living in South London at the time and getting invited to the Cans was a big moment for him – not least he was given a bit of wall to work on right next to where Banksy was making his ‘Cave Painting’.

As Uzzell-Edwards explained: “He pitched up with a jack hammer and a scary expression on his face and everyone was amazed by what he did – no one had seen him before.

A picture of Vhils ‘Chisel Face’ made the front Page of The Times on the Saturday of the Cans festival. Since then he’s travelled the world carving faces in to walls and his latest collaboration was with the man behind the famous Obama ‘Hope’ election campaign poster Shepard Fairey.

Come 10am on the Saturday morning, with the festival well promoted in the press, thousands turned up with huge queues to get in.

It really did have a festival feel about it – there were bizarre moments too – Jason Donovan showed up on a moped to have a look around.

At the end of the tunnel an area of ‘free wall’ was left so anyone with a spray can and some stencils could make their mark. Within days the free wall was covered and most of the art works by the big names had been ‘improved’ by passers by – it’s what Banksy wanted.

People always like to speculate on Banksy’s identity – is he an individual or a group of people cleverly marketing a movement?

One of those present at the making of the Cans festival was Massive Attack lead singer Robert Del Naja who some have claimed is the man behind the Banksy brand. I’m not sure it matters.