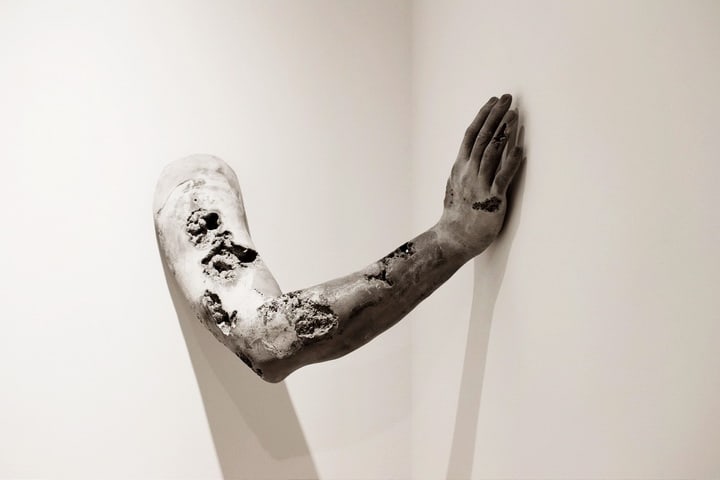 All images by Sasha Bogojev

Connecting Time is an exhibition that spans a decade of work by Daniel Arsham (previously), and was organized in collaboration with Galerie Ron Mandos and Perrotin for MOCO Museum in Amsterdam. In addition to the debut of Calcified Room and a specially designed iteration of Amethyst Ball Cavern, is one of the iconic pieces Hidden Figure (2011) from the Elastic Walls series. The piece is constructed from fiberglass, paint, and joint compound, and is a classic example of the artist’s ongoing play with the perception of physical space in addition to his experimentation with material properties. Arsham continually challenges the notion of what 3-dimensional art should be by creating the illusion of familiar materials or architectural elements performing in unusual ways. Pieces like Corner Knot (2008) and Falling Clock (2012) are prime examples of this way of working, and are positioned opposite of each other in the artist’s 10-year showcase. Arsham’s entire series of sculptural pieces from his fictional archaeology series dominates the basement of the museum. This body of work was directly inspired by the artist’s visit to Easter Island several years ago, and the uncertainty about the real history of the island’s monumental sculptures. Inspired by the idea of creating future artifacts, Arsham developed a whole range of different procedures and techniques to create eroded and decayed versions of po culture items. Using geological substances such as volcanic ash, rose quartz, obsidian, and glacial rock, he continuously adds new items to this opus, each time constructing the latest artifact with different material. Although he has previously taken objects from areas that he is personally attached to, such as sports, music, or pop culture, the show in Amsterdam includes a new series of works created from flat, printed works such as books, magazines, and food packaging. You can follow Arsham’s latest work, projects, and releases on Instagram, and visit Connecting Time until September 30th, 2019 at MOCO Museum in Amsterdam. Another solo exhibition, Static Mythologies, is also on view in Amsterdam at Galerie Ron Mandos through March 16, 2019. Drawing Meaning Out of Art with Conversation
0 (0)