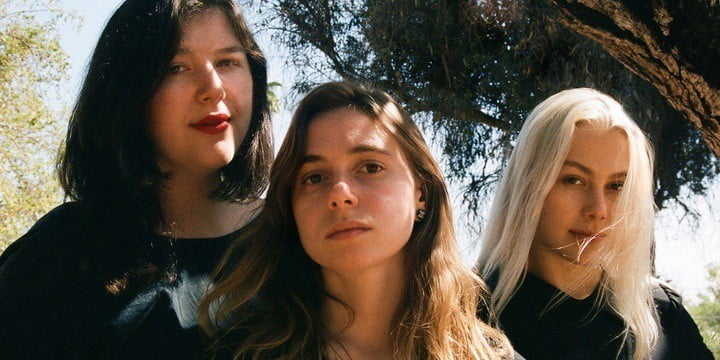 boygenius Are the Egoless Supergroup of Your Indie Rock Dreams

Boygenius offer proof in the theory that feeling respected by your peers will instill some of that respect back in yourself. This revelation can make the near-future leaders of planet indie rock stop apologizing for having half-baked ideas. It can be life-affirming, the way larks lead to magic when nudged along. And it can yield clever, gorgeous, bittersweet songs.

Young singer-songwriters Julien Baker, Phoebe Bridgers, and Lucy Dacus crossed paths while touring over the last couple of years, bonding over Henry James novels and the pleasant surprise of green rooms offering Kind bars. Long, thoughtful email threads followed. A crew formed. They were stars rising at approximately the same speed, in approximately the same circles. Within a year of one another, Baker and Dacus signed to Matador Records, and Bridgers to fellow indie stalwart Dead Oceans. Critically acclaimed albums, spots on late-night TV, performances at major festivals—all three experienced this initial wave of success not long after they met.

Not to say that their styles overlap significantly: Baker specializes in emo-flecked tactility, Bridgers in folksy specificity, Dacus in sharp-as-a-tack indie rock. Together, as boygenius, they’ve created a six-song, self-titled EP that highlights their individual hallmarks while never quite sounding like a solo release from any party. Baker’s quiet strumming, for instance, is punctuated in places by Dacus’ smoldering guitar distortion, and Dacus’ attention to poetic detail refines Bridgers’ intoxicatingly dark sense of humor. On the twang-tinged highlight “Me & My Dog,” when they come together for harmonies on the line “I dream about it,” the devastating beauty of simultaneous longing and isolation is briefly too much to handle

The trio wrote and recorded boygenius at Sound City Studios in L.A. earlier this year, in just four days. They’ll spend November playing the EP, as well as individual sets, across America—a tour that sparked the idea to record in the first place. And then, who knows? Between their in-demand road schedules, Baker, Bridgers, and Dacus typically only see one another every three to six months. But, Dacus offers, “It doesn’t suddenly become untrue that we like to make music together.”

A testament to their busy calendars, each singer hops on a conference call one mid-September afternoon from a different time zone. Baker is in Copenhagen on a European tour, Bridgers strolls around a lake near her L.A. home, and Dacus sits on her front porch in Richmond, Virginia. Though their text thread remains active, these three haven’t really talked in a while and they sound relieved to hear each other’s voices. 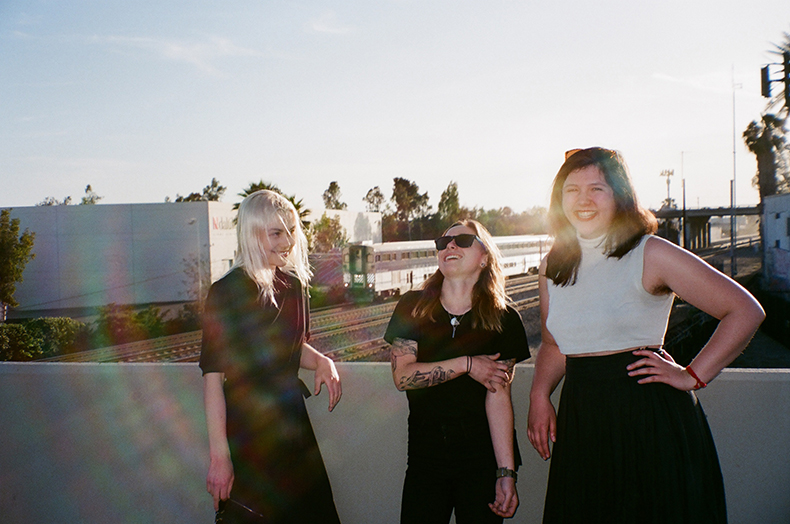 Pitchfork: You’re all under 25, at similar stations in your careers. Did that create an instant bond when you met?

Phoebe Bridgers: Yeah, there’s a shorthand that comes with that. Before this project, as the youngest and the only woman in the room, I have ended up deferring to people who seem like they know what they’re doing because they fuck with a knob and it does a thing. So it was nice to be in a room full of people who are all tapped into one brain and working with the same skill set. That’s not to say you guys aren’t technically capable, but it was nice to be figuring certain shit out together.

Lucy Dacus: When I met Julien, that was before my debut came out, and we were both being approached by the same labels. It was nice to have somebody to compare notes with. Being from Richmond, I don’t really have people in my hometown who are aware of what touring is like, so hanging out with you guys is very comforting in a specific way.

Julien Baker: You guys made it easy to feel understood, and it’s always so nice to have another person who is experiencing the exact same thing that you are.

JB: Connecting with people who are able to maintain a sense of humility is really useful. It’s one quality that endeared me to you guys—there is a genuineness in each of you that is not as common among musicians I’ve met. Lucy, one time you said this amazing thing to me that I live by now. You said, “My two goals are to not become jaded or entitled.” I thought, “Wow! What a concise way to remind yourself of that perspective.”

How did your collaboration actually play out when you were making the music? Were there moments when you wanted to go in different directions creatively?

LD: It was more like problem-solving and talking things out than having differing opinions. More often than not, someone would get an idea, and the other two people would jump up from their seats and point and be like “yes!” Maybe there were times in the middle of figuring something out when all three of us didn’t see where it was going, but there was a lot of trust that ended up in these songs that we’re all proud of. I don’t want to speak for you guys—I think you’re proud!

JB: What if all of a sudden I chose this conference call interview to say that I hate these songs? [laughs] I didn’t feel like there were moments of conflict because I never felt threatened or diminished, even if Lucy or Phoebe would say, “What if you tried this harmony instead?” or, “What if you changed the wording this way?” It never felt like I had to defend the artistic value of what I had presented, and that’s also because we all went into this project anticipating a high level of spontaneity. I didn’t roll up with a bunch of ideas that had to stay the way they were.

PB: The closest thing to conflict, for me, was presenting songs that I was apologizing for because I’m used to being in an environment where I’m like, “This is half an idea, this is not real!” I was doing it a lot on the first day, but it dissipated real quick. I vividly remember being like, “This is a half song,” and you guys both being like, “Let’s patch it up together.” So it was more of an internal conflict, letting go of that part of my brain.

I haven’t gotten the chance to tell you guys this, but over the past couple of months, I have been acting that way in all of my creative endeavors. You’ve taught me how to not apologize!

JB: Oh my gosh, me freaking too! It’s not as if I did not have confidence before, but I think I had a problem confusing politeness and deference, plus I would get too hung up on perfecting something. The thing that we talked about so much when we were together was the idea that people who end up making great art don’t naturally have better ideas, they just say all of their ideas, good or bad. Now that I’ve had the experience with you guys, I am way more open to voicing all of my ideas without fear of reproach.

You each brought a finished song and an idea to the sessions. Would you walk me through the process on one of the ideas that became a song?

PB: Do you guys want to talk about “Ketchum, ID”?

JB: That was my go-to one as well. It was Phoebe’s original idea, but each of our verses are our own.

PB: I wrote that song around a guitar lick my friend Christian Lee Hutson sent me, while I was staring out the window on tour in Idaho. Julien and Lucy had pre-existing ideas about being trapped on tour and fantasizing about disappearing in Idaho. We’re strangely all on the same page.

LD: Idaho’s my end game, for sure.

LD: It’s the most beautiful state, but everyone there just doesn’t want the rest of the world to know. I have heard from people who live there, like, “Be quiet please, don’t blow Idaho’s cover.”

Anyway, Phoebe brought in the first two lines that she sings, then we brought in the chorus about never really being anywhere when you’re on tour because you don’t ever get to see any of the places that you go. That’s the feeling all of us feel, which made it easy for each of us to write each of our own verses about distance and the strain of being on tour.

JB: Totally. That one fell into place automatically because it felt like we were inside of each other’s heads… [a weird beep is heard on the phone line]

JB: Huh. I was in the middle of giving my opinion and then a robot voice said, “Your input is invalid.” Oh my god, that’s a metaphor about having an opinion about music as a woman.

JB: Anyway, the chorus bowled me over: “I am never anywhere/ Anywhere I go.” That is haunting.

LD: The next line haunts me: “When I’m home I’m never there/Long enough to know,” like you’re not home long enough to have full connections to that place. For instance, when I came back from tour, a bunch of my plants were dead.

JB: The very last chorus, where it doesn’t finish all the way—“When I’m home I’m never there/Long enough…” I will cry to that.

PB: I was secretly like, “This is kind of a cool idea, but I could get ridiculed, so I’m gonna apologize for it 15 times.” It was a great example of me being like, “This is the dumbest thing I’ve ever thought of” and you guys being like, “Let’s do it!” I cried a little bit and then screamed. That was one of the most physically expressive writing experiences of my life because it was weirdly easy. It took us maybe an hour to finalize it.

For all of you: What’s something the other two are particularly good at, as songwriters, that they brought to the record?

LD: My hot take on this is that people want it to be a superhero narrative, where one of us can fly and one of us can read minds. I know what my weaknesses are, and you guys are really good at compensating for what I don’t like to do or am not super good at. Like, I don’t really like to play instruments, which is a strange thing for a musician to say, but I like singing and writing and I played, like, two guitars on this record. Julien played like 70 instruments—almost all of the guitars, banjo, mandolin, so much of the record. I definitely care about the words a lot, and something will occur to Phoebe as a joke but it ends up being the atypical part in a song that sticks with people.

JB: Phoebe, you really have a talent of making conversational, accessible songs because you don’t take yourself so seriously. Then that would be sifted through the refining factor of Lucy’s really meticulous and poetic dissection. When we were writing “Ketchum, ID” we rearranged a little bit of it so it could have an internal rhyme that works better. That was Lucy’s idea. I never would’ve thought of that.

I’m so open about being so proud of these songs because, even though I contributed a lot of ideas, the ownership is not wholly my own. With my own music, I’m much more reluctant to say, you know, “This record slaps!” It’s not that I’m shaking my humility, I just get so full of admiration for what each of you brought to this when I show it to other people. I have a pride that takes on this whole other quality and feels very freeing. It’s taught me to be more proud and confident about my own individual music.