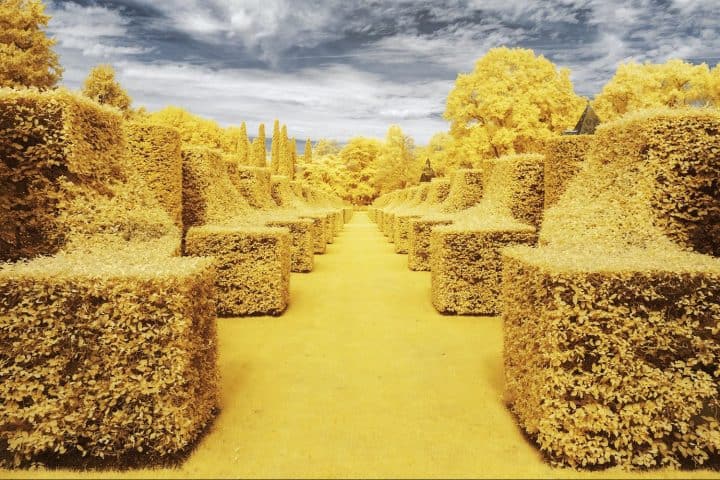 In French photographer Pierre-Louis Ferrer’s vibrant photographs, Dordogne, France is transformed into an enchanted land bathed in canary yellow. Ferrer’s colorful photographs illustrate the country’s idyllic topography, where the leaves upon the trees, fresh grass, and sculpted shrubbery are captured in the same vivid color.

While photographing, Ferrer takes time to observe his environment and decide on the best photographic technique to use. For his Dordogne photographs, Ferrer used an infrared photography technique which allowed him to capture the landscape in brilliant yellows. “My artistic approach is based on the invisible and imperceptible,” Ferrer tells Colossal. “I work with invisible parts of light (infrared and ultraviolet) and with techniques like long exposure to offer alternative views of our world.” This yellow effect in Ferrer’s Dordogne photographs is due to a mix of visible and infrared light, and each plant species appears different depending on how it reacts to the light. “I use a selective filter that let’s pass a large part of infrared light and a small part of visible light,” Ferrer explains. “The main subjects of this technique are trees and foliage because they react a lot under infrared light.”

Although yellow is prevalent in nature; found in bananas, autumnal leaves, egg yolks, and the irises of some animal’s eyes, in Ferrer’s photographs he standardizes all natural elements, highlighting the color’s prevalence in natural forms. As human eyes are not used to infrared light (due to its longer wavelengths), Ferrer’s photographs invite viewers to see Dordogne as through they are in a different dimension. The extravagant Jardins Suspendus at Marqueyssac and its ivy-covered châteaux are transformed into an ethereal world that might otherwise only appear in paintings.

Although fantastical, Ferrer’s photographs encourage mindfulness and allow us to reflect upon the importance of nature. “My goals are to invite contemplation, to realize the place of nature in urban places, to make aware of the impact of our environment on us, and our impact on the environment.”