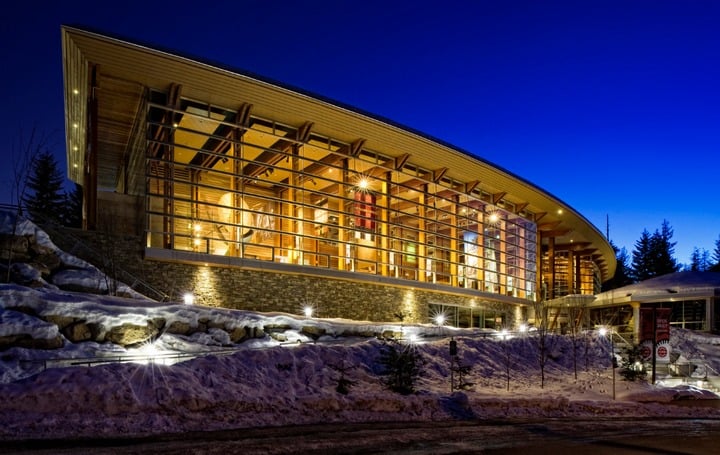 4 Principles of Designing with Indigenous Communities

Indigenous co-design—a more specific form of the general concept of co-design in which an architect collaborates with a stakeholder community—is a collaborative design process between architects and the Indigenous community as the client. The Royal Architectural Institute of Canada (RAIC) recently released a unique resource aimed at designers, clients, funders and policymakers looking for a guide in Indigenous co-design.

Four Case Studies Exemplifying Best Practices in Architectural Co-design and Building with First Nations builds on the success of the RAIC International Indigenous Architecture and Design Symposium held in May 2017. The four case studies set out to explore best practices in Indigenous co-design in the context of three First Nations and one Inuit community in Canada, with one case study selected from each of the four asset classes: “schools, community and cultural centers, administration and business centers, and housing.”

Each case study is anchored in the Indigenous peoples’ connection with the natural world and reflects who they are as people—their “traditions, culture, values and lifestyles, and their aspirations.” Interviews were conducted with architects and designers, Indigenous chiefs, community leaders, government employees, contractors and construction company officials, academics and government funders asking questions related to the collaborative experience in architectural co-design. Out of this case study research, done by Ottowa consultant Louise Atkins, come the most important aspects of co-design. The report offers four best practice principles, which we at ArchDaily have boiled down to “4 ‘I’s of Indigenous co-design.”

Just as each Indigenous culture has its own customs and traditions, the initiation of each case study project was also different. Ranging from a smaller-scale renovation project to a substantial cultural center, each project met a specific need in its respective society. This characteristic is not specifically different from traditional architectural practice, but it is particularly important when it comes to co-design due to the unique community relationship.

For example, the parties involved in the Squamish Lil’Wat Cultural Center started with a vision for a tourism hub, celebrating the heritage of the two First Nations. After a period of bi-partisan leadership, the partners used the 2002 bid for the 2010 Winter Olympics as a catalyst to create an agreement for a joint Squamish and Lil’Wat cultural center. After Vancouver won the bid in 2003, the financial backing afforded the First Nations the opportunity to push the project forward.

Compare the Cultural Center case study to that of the Quilakwa Centre—a renovation of a burned-down convenience store that turned into a tribal administrative hub and artisan shop—and you can begin to see the importance of the expression of culture from the very beginning of the project, no matter the scale. As explained in the report, this ultimately gives “agency back to Indigenous people and promoting their aspirations.”

Each situation presents its own unique set of challenges, as well as a unique community identity. In every case example, the buildings were anchored to their natural surroundings, integrating traditional materials. Each project maximized energy conservation through designs that utilized natural heating, cooling and air circulation systems alongside conventional mechanical systems. For all four projects, Indigenous respondents underlined the importance of architects who “listen well to the community vision and engage in ongoing dialogue.”

In Nunavik, traditional ways of life are important to the cultural identity and well-being. The overriding theme for the Inuit housing project was that sustainable housing design would go beyond technical issues of safety, energy and environmental considerations to embrace and emphasize “cultural responsiveness and empowerment.” Overall, the success of the project relies heavily on the ability of all parties involved to convey the culture and values of the Indigenous people effectively as well as to incorporate innovative design elements.

Each community took a hands-on approach to the building process, as each building was built through large community contributions. According to the report, “project management and the majority of the construction was done by Indigenous-owned entities employing local Indigenous tradespeople.” This exemplifies best practices in “employment, skills development, pride in the work and a sense of community ownership” as they relate to architectural co-design.

The end result is perhaps the most important aspect of this type of design. Creating buildings that resonate with the community and will be of lasting value encapsulates all of the other best practices previously mentioned. The collaborative process is shown in the finished buildings in how the project not only recognizes the community identity and involvement, but also contributes to carrying on that identity through the design.

You can see more about the report from the RAIC at their website here.

CategoriaWorld
EtiquetasArchitecture Design
“Like giving flowers to a fish” by Telmo & Miel in Saint Denis, France