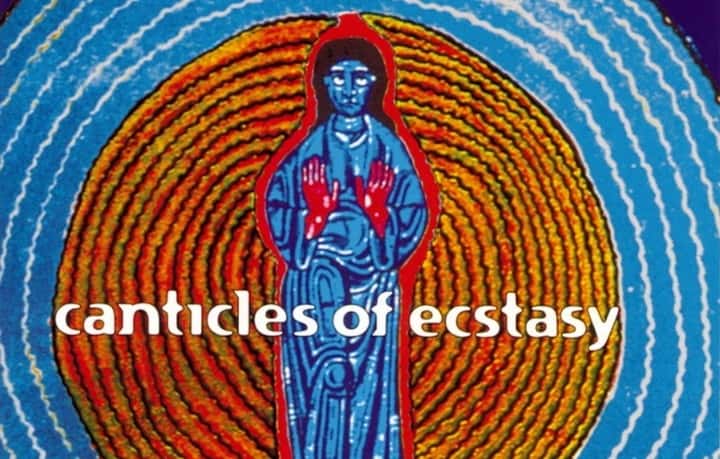 The German abbess, visionary, mystic poet, composer, and healer Hildegard von Bingen “has become a symbol to disparate groups,” writes Brian Wise at WQXR, including “feminists and theologians, musicologists and new-age medicine practitioners. Her chants have been set to techno rhythms; her writings on nutrition have yielded countless cookbooks (even though she never left behind a single recipe.)” She did leave behind an astounding body of work that has made her improbably popular for a 12th century nun, with a lively presence on Facebook and her own Twitter account, @MysticHildy (“very into technology, love to travel”). 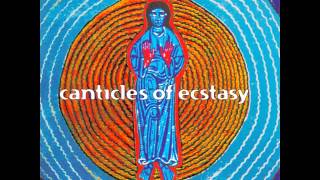 Her fame rests not only on the beauty of her work, but on her extraordinary life story and the fact that she is the first composer to whose work we can put a name. She was born in 1098 in Bermersheim, the tenth child of a noble family. It being the custom then to dedicate a tenth child (a “tithe”) to the church, Hildegard was sent to the Monastary of Saint Disibodenberg to become a Benedictine nun under the tutelage of Jutta, a highly-respected anchoress. “After Jutta’s death,” notes Fordham University’s sourcebook, “when Hildegard was 38 years of age, she was elected the head of the budding convent living within cramped walls of the anchorage.” 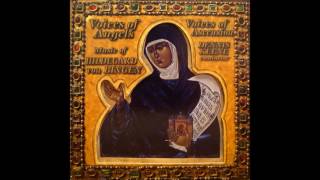 Throughout her life, Hildegard had experienced visions, beginning at the age of 3. (Oliver Sacks attributed these to migraines). At age 42, she had a powerful experience that radically changed her life. She described this moment in her writings:

And it came to pass … when I was 42 years and 7 months old, that the heavens were opened and a blinding light of exceptional brilliance flowed through my entire brain. And so it kindled my whole heart and breast like a flame, not burning but warming… and suddenly I understood of the meaning of expositions of the books…

Overwhelmed, and fearful of writing down her visions “because of doubt and a low opinion of myself and because of diverse sayings of men,” she nonetheless found encouragement from leaders in the church to write and circulate her theological work: “With papal imprimatur, Hildegard was able to finish her first visionary work Scivias (“Know the Ways of the Lord”) and her fame began to spread through Germany.” Soon after, she relocated her convent to Bingen, and began an incredibly productive period in the last few decades of her life. 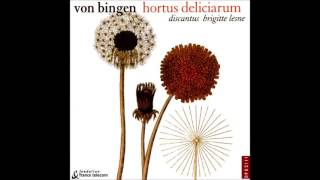 All told, she turned out an “extraordinary array of creative treasures,” writes Wise: a drama in verse, “more than 70 musical works, medical texts filled with 2,000 remedies, writings presenting feminine archetypes for the divine.” Although she held to orthodox doctrine, opposing the Cathars, for example, and other “schismatics,” she was a mystic whose ideas far exceeded the cramped theological confines of so many male counterparts. “Hildegard’s visions caused her to see humans as ‘living sparks’ of God’s love, coming from God as daylight comes from the sun,” writes Fr. Don Miller. “This unity was not apparent to many of her contemporaries.”

Her transcendent sight did not blind her to the diverse beauty of the natural world. “She not only had faith,” says German director and actress Margarethe Von Trotta, who made a 2010 biopic about Hildegard, “but she was so curious. Today, perhaps she would have been a scientist because she did so much research on healing people, on plants and animals.” Hildegard’s talent, intellect, and forceful personality made her a formidable person, “the only known female figure of her time,” writes Music Academy Online, “who achieved such intellectual stature and whose contributions have had lasting impact.” The revived interest in her music coincided with “the ‘new age’ chant craze in the mid-1990s,” but Hildegard’s work differs markedly from medieval chant written for male voices. 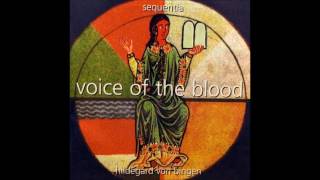 Varying from “highly syllabic to dramatic melismas (swirling melodies on a single open syllable,” Melanie Spiller explains, “her music is quite distinctive and easily recognizable, with unsual elements for the time, including exceeding an octave by a fourth or fifth, and large and frequent leaps.” Her music also functioned as “a vehicle for her own mystical experience,” and it continues to move listeners—of faith and no faith—who hear in her song celebrations of the divinely feminine and the wonders of the natural world.

No Thoughts on Experience the Mystical Music of Hildegard Von Bingen: The First Known Composer in History (1098 – 1179)0 (0)