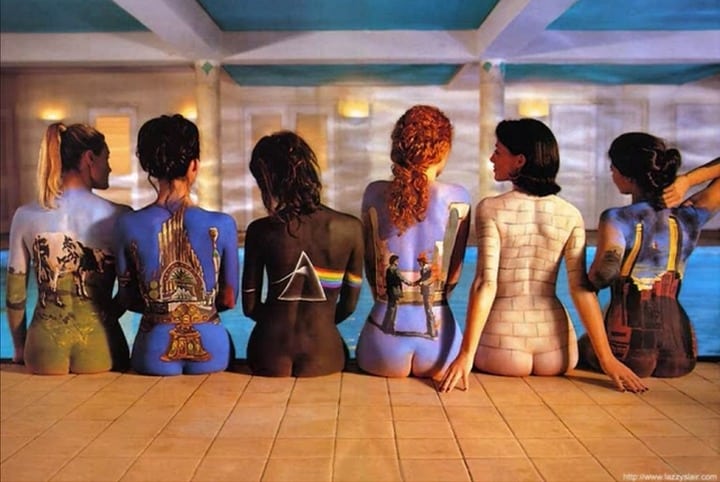 At the intersection of progressive rock, conceptual psychedelia, bluesy, anthemic classic rock, and experimental sound you’ll find Pink Floyd, a band everyone thinks they know but who always manage to surprise even ardent fans with the strange twists and turns of their discography. One might even say, as Bill Wyman writes at Vulture, that “there are at least four, or arguably five, Pink Floyds.”

“The first was a goofy and absurdist pop-rock band, led by one Syd Barrett,” writes Wyman. This original Floyd released The Piper at the Gates of Dawn then fell apart after its lead singer/writer/guitarist’s mental health declined precipitously. The second Pink Floyd first took shape “before Barrett joined, and then reached full pretentious flower after his departure” and replacement by David Gilmour. This was the “psychedelic, space-rock-y, quasi-improvisational ensemble” of A Saucerful of Secrets, Ummagumma, and Atom Heart Mother.

The third Floyd, Wyman argues, “is the one we know and love; the organic unit that created Meddle, The Dark Side of the Moon, and Wish You Were Here”—arguably the band’s creative zenith. From here, we move to the fourth version, “which saw a domineering [Roger] Waters taking control,” producing records that increasingly became Roger Waters solo albums—Animals, The Wall, and The Final Cut. The band’s stadium shows became bombastic affairs of Spinal Tap proportions.

Finally, the fifth and final iteration, critically snubbed but commercially successful, left the disaffected Waters to his solo work and went on with Gilmour at the helm to record A Momentary Lapse of Reason, The Division Bell, and twenty years later, the final Pink Floyd album, the mostly instrumental Endless River, made in 2014 after keyboardist Richard Wright’s death and drawing on recordings from The Division Bell sessions.

It’s easy to find fault with this schematic outline of Pink Floyd’s career—which leaves out their detours into film soundtracks with More, Obscured by Clouds, and an aborted score for Michelangelo Antonioni’s film Zabriskie Point. It leaves out a misbegotten, but notable excursion into ballet (!), and experiments with found sound recordings in the late-60s. This quick survey also underestimates the importance of Syd Barrett.

Pink Floyd’s first frontman may have taken his oddball sensibility with him when he left the band—and brought it to his captivatingly weird solo work—but his presence remained with them for years afterward and haunts one of their finest achievements, 1975’s Wish You Were Here. There are all sorts of lines that run through the various versions of Pink Floyd, connecting their strange, youthful, unpredictable early work to the highly-polished, and much less interesting, mature late recordings.

And yet, Wyman’s summary is a useful categorization nonetheless, a succinct explanation for how Pink Floyd “may be the only rock band that can credibly be compared to both the Beatles and Spinal Tap.” His massive undertaking—ranking every Pink Floyd song from worst to best—deserves a thorough read. Longtime lovers of the band and newcomers alike will find the commentary enlightening and informative (and he does include those film scores and gives Barrett his due).

While you read about each of the band’s officially-released, 165 songs, you can listen to them as well in the Spotify playlist above, which not only includes every studio release, but every live album as well. 17 hours total of Pink Floyd’s quirky pop, space-y, proggy experimentalism, masterful psych-rock soundscapes, climactic, politically-charged concept albums, and the denouement of their final three albums. No matter how long you’ve followed the band over their 40-plus year career, you’re likely to find some surprises here.

Survivors of Concert Violence Speak Out