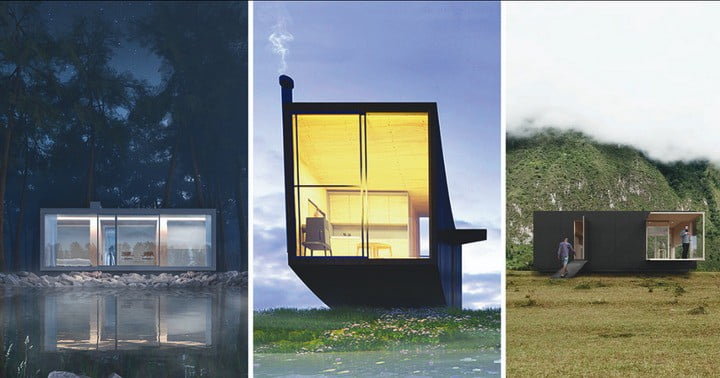 European modular container and building producer Ryterna modul has announced the winners of their fourth International competition: Architectural Challenge 2018 Tiny House. The competition asked for the design of a home for two people no larger than 25 square meters that integrated a kitchen, bathroom, living room, and sleeping area into a cohesive environment. With 150 projects from 88 countries, the three winning solutions and one honorable mention turn micro dwelling into a luxury.

See all the winning entries below.

Office-BAO founder Abdolrahman Kadkhodasalehi took first prize with his winning scheme Wave House, a semi-circular structure that appears to dance on its minimal foundations. ”The main purpose of this project is to use the blessings which nature provides for us such as rain, snow, and beautiful landscapes,” he writes. Large planes of glass, natural materials, and an integrated water harvesting system keep the home in constant dialogue with its surroundings.

Second place was awarded to Torii House, a modular proposal by Moscow-based architects Julia and Stas Kaptur. Consisting of a core module flanked by two additional programs wrapped in wood, Torri House can be endlessly customized with terraces, saunas, and additional spaces for larger families. The refined details and calculated modularity make this residence a suitable addition to sites from the suburbs to the ski slopes.

An expandable proposal by architect William Samin titled Trapezoidal Mod took third place in the competition. The proposal divides wet and dry functions into two separate modules that can be effortlessly re-configured to adapt to shifting terrain or potential expansion. The charred exterior and warm wood cladding within provide the perfect environment to frame natural landscapes from forests and plains to meadows and mountains.

Toronto-based Clarence Zichen Qian was given honorable mention for his design Project ATN, comprised of a titled structure populated with a grid-like millwork structure to define the interior space while providing calculated vistas into the world outside. “To create a rethinking atmosphere, the proposed building environment is lifted off the ground, detached from the crowd, the unconscious everyday routine,” he writes.