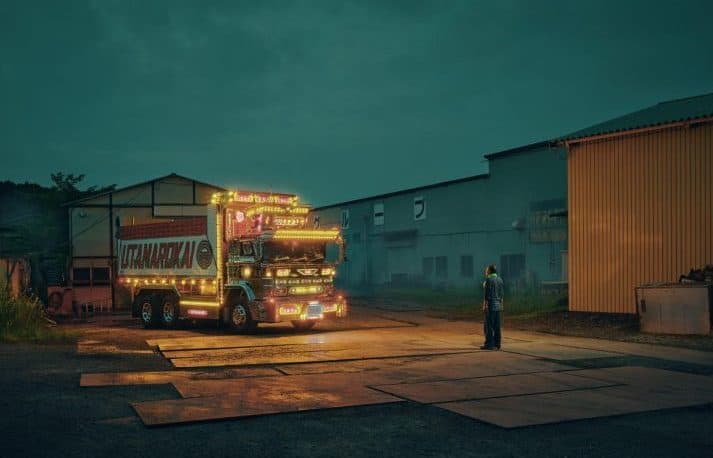 The Blinged-Out Work Trucks of Japan Photographed by Todd Antony

For more than 40 years Japanese truck drivers have been piling on lights, patterned fabrics, and other over-the-top adornments to their work trucks, creating moving masterpieces covered in LEDs. This tradition of decorated trucks or “Dekotora” originated from a 1970s Japanese movie series inspired by Smokey and the Bandit titled Torakku Yaro or “Truck Rascals.” Drivers first began decorating their vehicles in the style of the comedy-action films in hopes of being cast in upcoming films. Eventually the extravagant trucks became a way of life for many workers, with decoration costs to produce such elaborate vehicles sometimes running over $100,000.

Although the art form is now seeing a decline after it reached its peak in the ’80s and ’90s, the Utamaro-Kai Association of Dekotora drivers has begun to help raise funds for various charity initiatives, including areas of the country that have been hit by the recent Tsunami. Photographer Todd Antony‘s latest photographic series documents the men behind the association, taking a peek inside their cabs to view the personalization that goes into each piece of machinery. You can view more of Antony’s recent projects on his website and Instagram. (via Colossal Submissions)