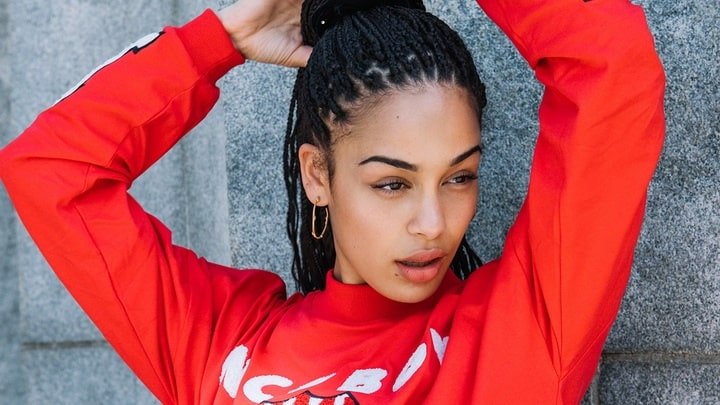 Jorja Smith Has a Voice That Could Heal the World

It’s a warm October afternoon in Brooklyn’s Fort Greene Park as kids, parents, and the underemployed enjoy their last few days without a jacket. Meanwhile, Jorja Smith is cozy in a sweater dress and Nikes, eyeing down a photographer’s lens. She’s only 20, but she carries herself with an uncanny confidence—not the bravado of youth so much as the grace of someone with four or five decades to lean on, someone who understands how less can be more.

On record, Smith’s vocals suggest the elegance of a seasoned professional as they eschew showy runs for startling emotional honesty. In the park, she talks about everything from skincare routines to universal health care with the air of an expert. But it’s in the little moments that you’re reminded she’s just barely out of her teens, like when she stops to ogle over a poodle mix named Pumpkin, or her rampant usage of the word “sick” to describe anything and everything she deems worthy.

Smith introduced herself to the world last year with “Blue Lights,” a contemplative slice of boom-bap soul dealing with the strained dynamics between Black men and the police. “Imperfect Circle,” from her 2016 debut EP, Project 11, is another politically-charged record about the seemingly endless prejudice that fuels racism. Though Black artists who take on social injustice in song are often tasked with the burden of providing solutions to such intractable problems, the way Smith grapples with their continuity  instead feels courageous in itself.

Her voice, soothing and substantial, is filled with an aching that suggests she was born to counsel the world’s suffering. She’s tried on a variety of styles thus far, from boho R&B to fizzy pop to EDM, her vocals acting as strong connective tissue. So strong that when she tells me, “My voice makes the genre because I sound like me on all my songs—I’ve made my own genre: Jorja Smith,” the remark doesn’t seem especially cocky as much as a point of fact. 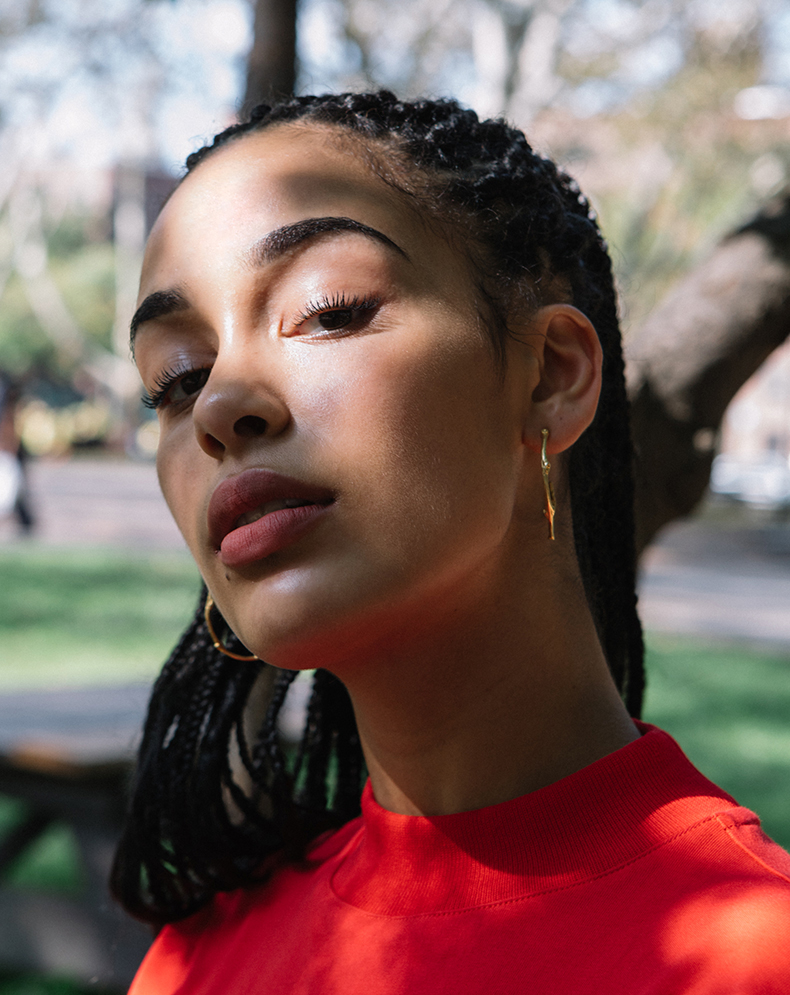 Her list of fans with boldface names seems to grow by the day, including Drake, who approached her to collaborate on his More Lifetrack “Get It Together,” and Miguel, who recently covered her summer single “On My Mind.” That Smith track, which now has more than four million views on YouTube, is her homage to the UK garage sounds she grew up listening to in Walsall, an industrial town in the middle of England.

She wrote her first-ever song, “Life Is a Path Worth Taking,” at age 11, and it already had Smith in a comforting mode, with lines like, “You need to find the right steps to make it clear and faithful to you.” Her mother, a jewelry maker, and her dad, who played in a neo-soul band named 2nd Naicha, recognized her talent and encouraged her to enroll in a performing arts school. At 15, she gained the attention of her current manager after posting a cover of Alex Clare’s “Too Close” online, and eventually graduated high school with a notebook full of material to jumpstart her career, including “Teenage Fantasy,” a song about the blinding quality of young love, “Blue Lights,” and “On My Mind.”

But just last year, Smith was still a barista at Starbucks, ducking into the stockroom to record voice notes to remember impromptu lyrics. Her dreams of music stardom were so vivid that she soon found herself taking breaks at the coffeeshop to rehearse mock interviews too. Back then, she would ask herself questions like, “So what are you working on next?” Now she’s actually giving details about her forthcoming debut LP.

In the wake of the success of “On My Mind,” Smith says people keep asking her to make more upbeat tracks for the album, but she’s already made up her mind. “No, sorry,” she says unapologetically, answering a potential would-be opportunist. “Do you just want me to write an upbeat song because you want one?” Then again, it doesn’t mean we’ll never hear another uptempo track from Jorja Smith. “I’m not gonna just disappear after one album,” she says. “You’ve got a whole lot of time to hear more from me.” 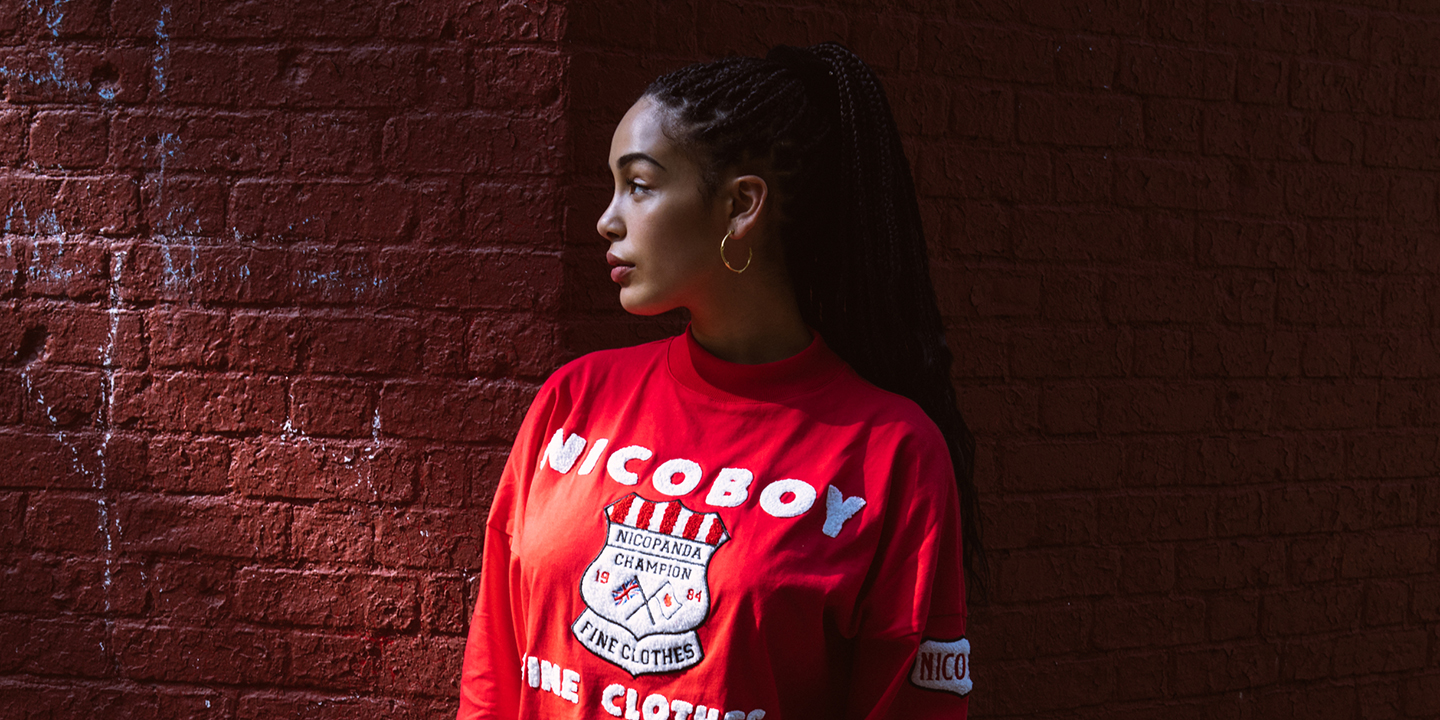 Pitchfork: The internet has played a pivotal part in your success thus far, though you’ve said that you are wary of the online world. How have you used social media while also retaining some mystique?

Jorja Smith: Before I put “Blue Lights” out, I deleted my Instagram and everything and started again. I literally started from zero, and now I’ve got over a quarter of a million followers, which is sick. I used to tweet a lot when I was younger, just random shit, but now I’m like, “I don’t need to.” Also, people read into too many things, so I’d rather not have to deal with that. I express my thoughts through my music.

You have virality behind you, but you still adhere to old school ideas like waiting to release an album and not flooding the internet with songs. Do you ever feel pressure to constantly put out music?

No. I don’t know if it’s because I’m not signed to any label, but I don’t feel like I need to be doing this or that. Ever. I’m going at my own pace. I know what I’m doing.

It’s not even about what I don’t like. I just like what I’m doing right now without getting a label involved. So why would I change it at the moment when we’re doing well? I don’t want to mess up that structure just yet.

“Blue Lights” is pretty heavy for a debut single, with its depiction of police brutality and crime. How did that track come about, and do you plan on writing more records like it?

I wrote that when I was 17, because I used to study media in school, and I chose to do a project on post-colonialism in grime music. Putting it out first wasn’t strategic either—that’s just what was going on at the time, and not only at the time, but for ages. And if you want to hear more socially aware stuff, don’t worry. I’ve got that. I’ve got this one new song called “Beneficial” that’s about the benefit system; we have the NHS [National Health Service] in the UK, but imagine if we didn’t have that—there would be so many people who would be ill. I’ve also got another new song called “Life Boats,” where I’m talking about how it’s not fair that the supposed minority—as in the people who we talk about being on benefits—are actually the majority. Because the minority is actually the rich white people that are at the top, and everything is catered to them. 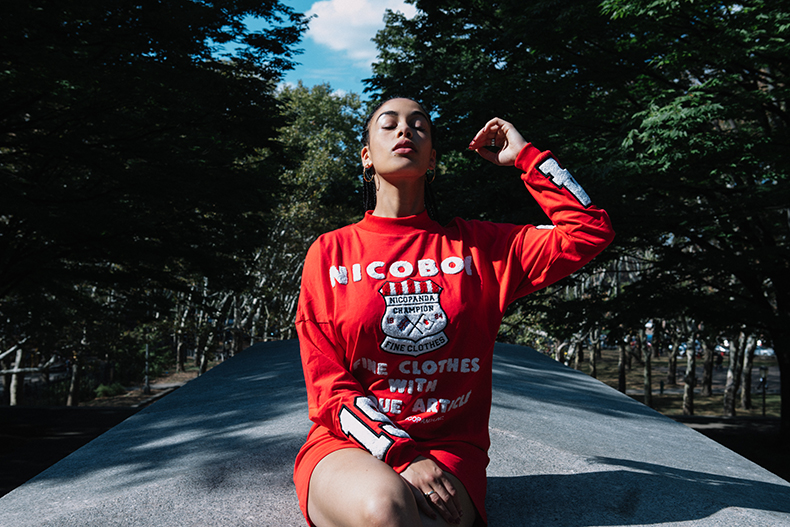 You’ve said that being a role model is important to you. Why?

I’ve got little cousins and they love my music, and I want my family to be happy with what they’re daughters and sons are listening to as well. I just write what I write. It’s honest. I could write some shit but I don’t.

You’ve talked about your affinity for Amy Winehouse and, though her voice was beautiful, she wasn’t the best role model.

Amy Winehouse died in 2011, when I was 14. She had a lot of drug problems, but I didn’t realize how much she was in the news. I didn’t understand any of that. I was just listening and enjoying her voice and her music. I don’t really have a celebrity role model and I never have. I’ve got my mom and dad.

Does it bother you when people compare you to Amy Winehouse?

What I found listening to Amy Winehouse is that she’s real and you can believe what she’s singing about. I hope that’s what people can say when they listen to me. I’m not here to sugarcoat things.