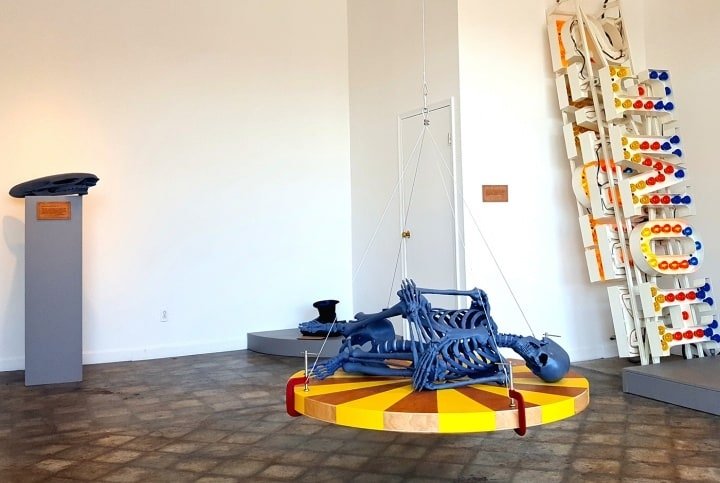 An Uncanny, Carnivalesque Exhibition that Tricks and Tantalizes0 (0)

This is also the second thing you’ll encounter, because just inside the original entryway, Ferguson has exactly replicated it, including the large, colorful mural on the left-hand wall and the constellation of dirty tape marks studding the door. If a sharp-eyed visitor looks, in a fit of confusion, for some kind of explanation, she might notice a laser-cut wooden plaque bearing a quote from Sigmund Freud, mounted on the lower-right-hand wall of both entryways. It reads:

That factor which consists in a recurrence of the same situations, things and events, will perhaps not appeal to everyone as a source of uncanny feeling. From what I have observed, this phenomenon does undoubtedly, subject to certain conditions and combined with certain circumstances awaken an uncanny feeling, which recalls that sense of helplessness sometimes experienced in dreams.

The quote is from Freud’s 1919 essay, “The Uncanny,” in which the psychiatrist expands upon ideas first identified by Ernst Jentsch in his 1906 essay, “On the Psychology of the Uncanny.” This is just one of several uncanny moments arranged by Ferguson in his show, which juxtaposes his original and oddly kinetic sculptural works with snippets of canonical literature on plaques.

“That entryway is just so strange already,” said Ferguson, in an interview with Hyperallergic at the gallery. “I just had to do it again. A lot of my work lately has been about replication, or duplicates, and the uncanny being experiencing something more than once.”

These duplicated moments extend beyond the double-entryway and immediately into the gallery, where a viewer is hailed by a grinning human skull. The endless repetition of a strange, looping strain of music, identified by Ferguson as a 10-second cut from Swedish electronica and folk music trio Detektivbyrån (“The Detective Agency”), imbues the gallery with a slightly whimsical, carnival feel. A second human skull — attached to a full skeleton that is an exact 3D-printed replica of Ferguson’s own — rotates slowly on a hanging circular platform. As you draw further into the gallery, a look back at the first skull might produce the jarring realization that what appeared to be a normally proportioned skull when viewed at the entryway, has warped into a dislocating optical illusion, inexplicably stretched and oversized when viewed head-on (Ferguson is likely familiar with and referencing the optical illusion in Hans Holbein the Younger’s famous painting, “The Ambassadors“). A quote from Franz Kafka’s The Metamorphosis punctuates this clever and disturbing transformation.

Ferguson’s works are technically accomplished and tidy in their execution. He meticulously calculates the average height of a viewer at the door of the gallery, calculating the angle to most effectively produce the shock of a bait-and-switch with his sculpture. His double entryway goes utterly unnoticed by some, and absolutely astounds others, including one gallery regular who backed her way out in confusion at the opening, and had to be chased down by one of the gallery staff. (“I swear, my intention wasn’t to confuse the elderly,” laughed Ferguson.)

The artist went to great lengths to access the medical scanners he needed to perform the skeletal scans that enabled the creation of his spinning avatar, driving to Chicago at a moment’s notice (and mysteriously getting a doctor’s note for his request). The effort and professional acumen that Ferguson brings to his works have the feel of Christmas morning: someone has worked extremely hard behind the scenes to create a sense of wonder, illusion, and excitement. In one corner, a neat pile of clothing is topped with an upside-down bowler hat rigged with an illusory tunnel of mirrored lights so compelling that a gallery visitor had to be discouraged from trying to pick it up.

These plaques, and a number of other details of the installation, draw inspiration from carnival aesthetics, Ripley’s Believe It Or Not — an entertainment franchise with Depression-era roots that collected “oddities” and presented them in books, museums, and, eventually, on television — and the eponymously referenced circus sideshow. The front window features a large-format show poster in the style of the carnival broadside. On a little ledge, a tiny shark in an embalming tube is on display — Ferguson’s cheeky riff on Damien Hirst’s seminal work, “The Impossibility of Death in the Mind of Someone Living,” but equally a reference to the “cabinet of curiosity” style of old-school sideshow culture.

Ferguson’s thoughtful mix of high art and common culture makes for a playful and engaging exhibition — if one that, at times, can fall into the archetypical male tendency to mistake elements of one’s personal experience for universal truth. But this is easy enough to overlook in a show that has spared no effort in creating uncanny illusions for the purpose of the fantastic, rather than the indulgent.

At home with Salvador Dali0 (0)

No Thoughts on An Uncanny, Carnivalesque Exhibition that Tricks and Tantalizes0 (0)