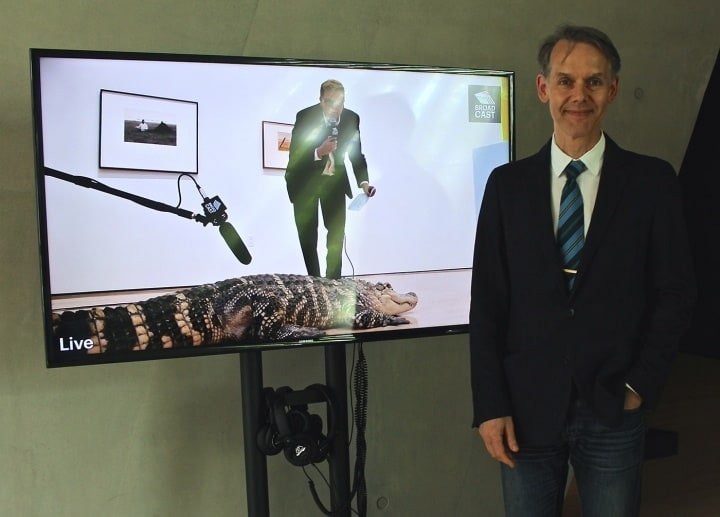 EAST LANSING, MI — Magic, much like stand-up comedy, is considered by neophytes to be a spontaneous or improvisational form, but true practitioners know it to be, like most other performance, based on a formal structure. The Transported Man, a group show at the Eli and Edythe Broad Art Museum at Michigan State University, uses the mechanisms of magic as a means to analyze art.

“[Arthur] Conan Doyle thought about Houdini that his illusions didn’t have to do with tricks, that it was about magic, about something transcendental,” said newly-appointed Broad director Marc-Olivier Wahler, in an interview with Hyperallergic about the foundational concepts behind his inaugural exhibition for the museum. “And Houdini wasn’t happy — he was very good friends with Conan Doyle — he said, ‘No, no, no, there is no magic, there are tricks.’”

Wahler comes to art by way of philosophy, and with this first exhibition at the Broad, he took on what is arguably the deepest philosophical question about art: What makes something art?

“This is the biggest challenge we have as a museum, as a curator: trying to pay tribute to what the artists are looking for,” said Wahler. He continued:

And the main problem is a language problem. The language we use in art [is] formulated by the ones who are in charge of art — so how can you explain an artwork with the language developed by those in charge of explaining the artwork? It’s almost impossible. To do that in any type of field is forbidden. So I try to point outside the art world, ways to think, ways to look at things— for example quantum physics, science fiction, magic — and see if we can cast a new light on what is at stake in art.

Specifically, The Transported Man finds the common ground shared between art and magic — work dedicated to the practice of presentation, showmanship, and illusion being taken for transfiguration or wizardry. In a sense, posing a philosophical challenge to the idea of the artist as a magical figure is taboo, because the conclusion may be that they are, in fact, playing a trick on the viewer. Exposing as false the idea that an artist channels a mystical capacity to turn non-art objects into art is tantamount to a magician revealing the mechanisms behind his illusions.

For the purposes of the exhibition, Wahler has borrowed a formal structure from magic. The character Cutter in Christopher Priest’s novel-turned-movie, The Prestige cogently lays out the important parts of this structure:

Every great magic trick consists of three parts or acts. The first part is called “the Pledge.” The magician shows you something ordinary: a deck of cards, a bird or a man. He shows you this object. Perhaps he asks you to inspect it to see if it is indeed real, unaltered, normal. But of course … it probably isn’t. The second act is called “the Turn.” The magician takes the ordinary something and makes it do something extraordinary. Now you’re looking for the secret … but you won’t find it, because of course you’re not really looking. You don’t really want to know. You want to be fooled. But you wouldn’t clap yet. Because making something disappear isn’t enough; you have to bring it back. That’s why every magic trick has a third act, the hardest part, the part we call “the Prestige.”

Many of the works on display within The Transported Man refer directly to the elements of a magic show Priest has defined: pairs of floating hands by Urs Fisher (“Hands​” 2002); a rare 1904 film, Match de Prestidigitation (A Wager between Two Magicians), by Georges Méliès; and “Loxodonta,” (2017) Daniel Firman’s astonishing work which features a very convincing, life-sized elephant cast from flexible polyurethane resin, seemingly hanging in midair within the Broad’s vaulted main gallery. But the real thrust of the show goes beyond literal interpretations of the theme of magic, to explore the nature of illusion in art, and what effects illusions have on viewers.

The show itself feels a little discordant, vacillating between the works that take on literal aspects of magic in an art historical manner, such as a 1947 letter from René Magritte, “Letter to André Breton,” which discusses magic in the context of Surrealism, and those that are more conceptual, like “Base magica — Scultura vivente (Magic Base — Living Sculpture)” (1961), by Piero Manzoni, which purports to transform whomever stands in the designated footprints into a work of art. This dithering between categories is perhaps unavoidable for a show attempting to take on such ambitious themes.

“I think this — the Pledge, the Turn, the Prestige — it’s basically the narrative arc of any good story, and I think any good artwork, as well,” said Wahler. “If we keep this in mind, that there’s always this tension between things that are visible and invisible, and how the brain is tricked, the more it will cast new light on how the brain functions while watching artwork.” Wahler pointed to the recent preponderance of studies of magic tricks within the field of neuroscience, because the neural responses to tricks reveal important aspects of cognitive functioning and the enjoyment a viewer takes in a successful illusion.

In the art world, this might be thought of as “true believer” syndrome. If, in broad terms, art makes a kind of pledge, it is that art means something. We are presented with ordinary objects — some, in the modern era, physically indistinguishable from utilitarian objects — and told that these hold special meaning. If, as Wahler asserts, each artwork presents a clear narrative arc, where does that leave the viewer’s agency, in terms of interpretation, critical thinking, or the entrusting of belief in the object?

“This is an important question,” said Wahler. “The more interpretation an artwork can hold, the better, the more dense, the more efficient it becomes —without losing its identity, of course.”

The Transported Man may raise more philosophical questions than it answers, but that does not diminish the success of many of its playful, complex, and ambitious components. Whaler has certainly come out the gate at full speed, demonstrating a willingness to challenge viewers to engage in some transformative thinking. Ultimately, those who derive the most meaning from this experience are likely those who come determined to believe in it.

(All images are by the author for Hyperallergic.)

No Thoughts on When Magic and Art Find Common Ground0 (0)