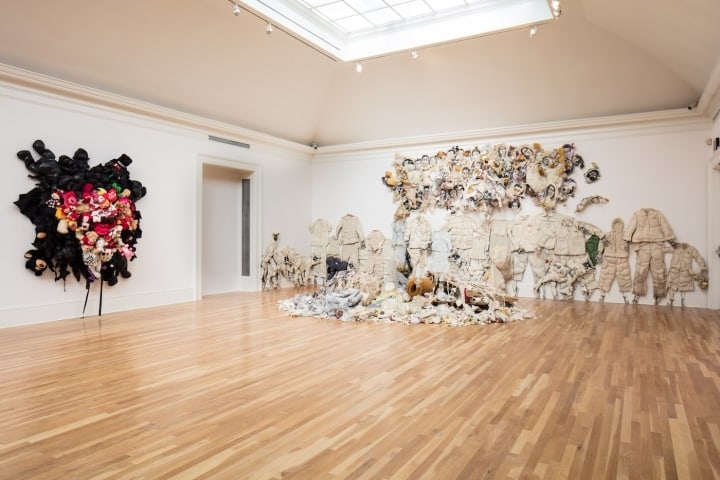 NEW ORLEANS — Rips, tears, and fissures punctuate the works in Beyond the Canvas: Contemporary Art from Puerto Rico, a group exhibition at Newcomb Art Museum showcasing five artists’ process-driven approaches to painting. The exhibition cleverly situates an intergenerational cross-section of artists — Elsa Maria Méléndez, Zilia Sánchez, Julio Suárez, Arnaldo Roche Rabell, and Pedro Vélez — within Puerto Rico’s shifting sociopolitical landscape. This year marks the centennial of Puerto Ricans gaining US citizenship and, on June 11, they voted in their fifth referendum on statehood, expressing an overwhelming desire to become the 51st state. In the exhibition, the tension of the US-Puerto Rico relationship is articulated through an engagement with the materiality of painting itself, specifically the canvas. Concepts coalesce around the stretching, ripping, and rubbing of this substrate, and how these actions can be a metaphor for a constant negotiation with history.

In response to the recent student protests at the Universidad de Puerto Rico, Elsa Maria Méléndez returned to her maximalist work “El Ingenio Colectivo o la Maldición de la Cotorra” (2010/2014/2017), a mixed media assemblage sculpture that covers the walls and floor. A row of paint- and embroidery-covered, foam-stuffed outerwear wraps the north wall of the Newcomb galleries. Suspended above these anthropomorphic forms is a cloud-like cluster of soft sculptures sporting portraits rendered in ink. A mound of wooden shipping pallets, shoes, banners, and various fabrics — including a pile of pillow-like, fabric hands made from ink and textiles — is heaped on the ground in front of the wall. Méléndez first created “El Ingenio Colectivo o la Maldición de la Cotorra” in 2010. With each new iteration, the artist adds elements, including hashtags that represent the current student protests and an audio recording of a parrot’s voice. The redundancy of the parrot’s words serve as a metaphor for cyclical, empty discourse.

Pedro Vélez’s swift, gestural marks on the surfaces of raw canvases suggest urgency. Vélez shares aesthetic similarities with Méléndez — such as the illustrative ink markings found on the surface of their works. The jagged cuts into “Hardcore Rose” (2016) reveal a photograph Vélez took of women standing in front “Piel Roja” (2004), a painting by Julio Suárez, at an exhibition in San Juan; “Piel Roja” is also included in Beyond the Canvas. This smartly referential visual conversation creates a literal dialogue between the artworks, artists, and styles. Arnaldo Roche Rabell uses frottage to develop his enormous allegorical compositions. The continuous friction applied to the underside of the canvas creates depth, which Rabell further enhances with thick layers of oil paint. The artist’s gestural brushstrokes and depiction of a kitchen table still life in “Isla Vacía” (1987) share an affinity with Angel Otero’s “Bingo Night” (2009). Otero, whose work is not included here and who hails from a younger generation of Puerto Rican painters, engages with the materiality of the canvas through a process of oil paint scraping.

The sensual contours of Zilia Sánchez’s “Amazonas” (1993) beckon the viewer. The corporeal, curvilinear shapes in the pale blue and white painting suggest a mountainous landscape. To achieve depth, Sánchez stretches canvas over forms. The limited color palette and repetitive protrusions bear resemblance to neo-avant garde Italian painter Enrico Castellani, specifically his undulating, monochromatic “Superficie” (1974). The relaxed, wave-like surfaces of Sánchez’s “Amazonas” are a rhythmic counterpoint to Castellani’s aggressive texture, which he created by piercing the back of the canvas with a nail gun. Sánchez’s protruding surfaces stand in contrast to the subtle planar shifts of Julio Suárez’s austere monochromes. Where Sánchez extends, Suárez tucks. His shaped canvases with descriptive titles like “OO (infinito)” (2013) — a spherical, lime green diptych — have slight variances in depth, achieved by folds in the canvas and controlled brushwork.

Beyond the Canvas positions these painters not only in response to, but alongside and in dialogue with the modernisms of our time. It is a thoughtful investigation of artistic practices that look beyond a linear, Western framework, and a strong argument for a more global view of contemporary artistic practices. While it makes the case for identifying a decidedly Puerto Rican or Caribbean aesthetic, it is also an exhibition of painters wrestling with the history of painting. By puncturing, rubbing objects across, and pushing objects through their canvases, the artists in Beyond the Canvas interrogate the medium’s history, pushing it beyond a Western framework and into a global dialogue.

No Thoughts on Puerto Rican Painters Who Fold, Cut, and Tear the Canvas0 (0)