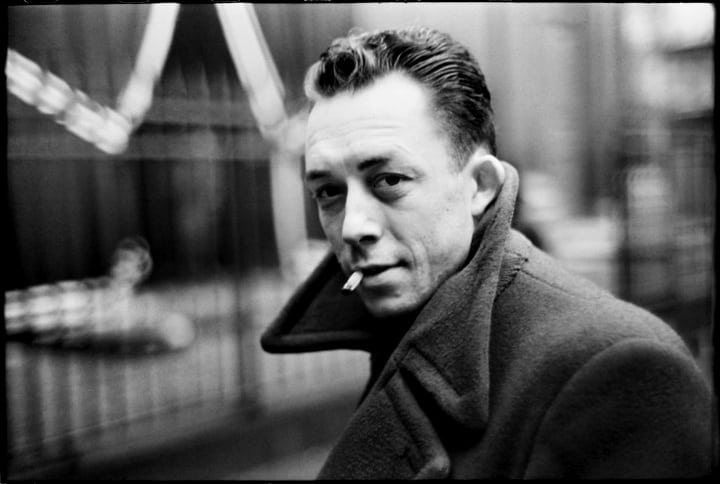 “In a world whose absurdity appears to be so impenetrable, we simply must reach a greater degree of understanding among men, a greater sincerity.”

What an astrophysicist might have the perspective to eulogize as “the incredibly improbable trip that we’re on” the rest of us might, and often do, experience as simply and maddeningly absurd — so uncontrollable and incomprehensible as to barely make sense. What are we to make of, and do with, the absurdity of life that swarms us daily? Oliver Sacks believed that “the most we can do is to write — intelligently, creatively, evocatively — about what it is like living in the world at this time.” And yet parsing the what-it-is-like can itself drive us to despair. Still, parse we must.

More than a decade before Albert Camus (November 7, 1913–January 4, 1960) became the second-youngest laureate of the Nobel Prize in Literature, awarded him for work that “with clear-sighted earnestness illuminates the problems of the human conscience in our times,” he contemplated the relationship between absurdity and redemption in a 1945 interview by the French journalist Jeanine Delpech, included at the end of his Lyrical and Critical Essays (public library) — the superb posthumous collection that gave us Camus on how to strengthen our character in difficult times and happiness, despair, and the love of life.

Three years before the interview, twenty-eight-year-old Camus had stunned the world with his revolutionary philosophical essay The Myth of Sisyphus, which begins with one of the most powerful opening sentences in all of literature and explores the paradox of the absurd in life. “I draw from the absurd three consequences, which are my revolt, my freedom, and my passion,” he writes — something that prompted his interviewer to ask whether a philosophy predicated on absurdity might incline people to despair.

Camus — who years earlier had asserted that “there is no love of life without despair of life” — answers:

All I can do is reply on my own behalf, realizing that what I say is relative. Accepting the absurdity of everything around us is one step, a necessary experience: it should not become a dead end. It arouses a revolt that can become fruitful. An analysis of the idea of revolt could help us to discover ideas capable of restoring a relative meaning to existence, although a meaning that would always be in danger.

Speaking at the close of the meaningless brutality of World War II, six years before he formulated his ideas on solidarity and what it really means to be a rebel, Camus considers the only act of courage and rebellion worth undertaking:

In a world whose absurdity appears to be so impenetrable, we simply must reach a greater degree of understanding among men, a greater sincerity. We must achieve this or perish. To do so, certain conditions must be fulfilled: men must be frank (falsehood confuses things), free (communication is impossible with slaves). Finally, they must feel a certain justice around them.

I have often wondered whether Camus had read W.H. Auden’s poem “September 1, 1939,” written in 1940, which includes this searing stanza so kindred to Camus’s sentiment:

All I have is a voice
To undo the folded lie,
The romantic lie in the brain
Of the sensual man-in-the-street
And the lie of Authority
Whose buildings grope the sky:
There is no such thing as the State
And no one exists alone;
Hunger allows no choice
To the citizen or the police;
We must love one another or die.