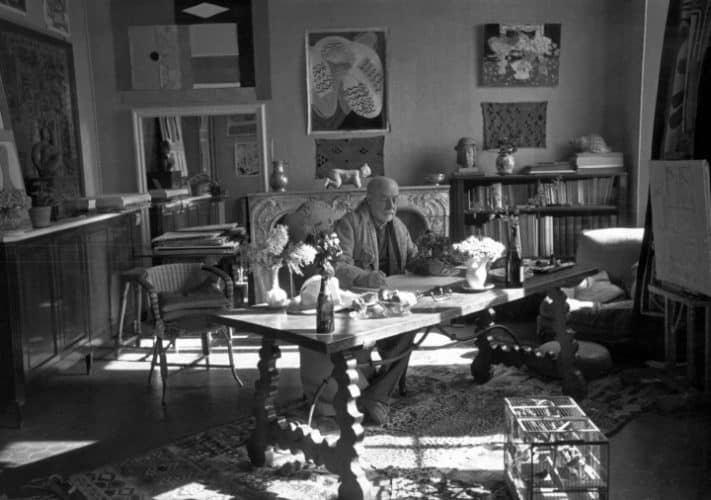 BOSTON — In 1944, Henri Cartier-Bresson photographed Henri Matisse in his studio surrounded by curious objects: a pewter jug with a swirling design, a Samoan tapa, Chinese porcelain, Kuba cloths, seashells, a bird cage, and a 14th-century head carved from stone. Obviously Matisse loved beautiful, well-designed objects and had collected more than 200 by his death in 1954. In his mind, they were neither decorative baubles nor travel trophies. Rather, they served him as visual references that opened his mind to new possibilities in seeing and creating.

Matisse in the Studio, at the Museum of Fine Arts, Boston, is the first exhibit to focus specifically on Matisse’s objects and how they influenced his art making. Thirty-nine are paired with the paintings, drawings, bronzes, and cut-outs they either influenced or appeared in.

“Our exhibition is exciting because it allows you to almost step inside the space of the studio and see some of the actual materials that Matisse was looking at and he was inspired by,” said Ellen McBreen, associate professor of art history at Wheaton College and Matisse scholar. She co-curated this exhibit with Helen Burnham, the Pamela and Peter Voss curator of prints and drawings at the MFA, and Ann Dumas, curator of the Royal Academy of Arts in London, where the show will travel to next.

Early in his career, Matisse sought new ways to represent one of his lifelong passions, the human nude form. He said, it “permits me to express my almost religious awe towards life.” Thus, it’s fitting this exhibit opens with Bresson’s photo and an anthropomorphic turquoise vase Matisse found on his 1910 trip to Andalusia. No doubt the artist took pleasure in the vase’s sinuous curves, half-moon handles, and bulbous hips that bring to mind a stoutly woman. It is the central figure in his painting “Vase of Flowers” (1924).

Perhaps the vase liberated Matisse from his academic art training, which required him to draw models exactly as he saw them. He knew the era of straight-on figure representation was over. He had seen the 1901 Vincent van Gogh retrospective at Galerie Bernheim-Jeune and followed Picasso and Braque as they explored Cubism. While he wanted to abstract the human form, he wanted to do it in a simpler, more natural way.

On his way to Gertrude Stein’s house in 1906, he stopped in a little Parisian junk shop and purchased a hand-carved wooden Vili figure, a tourist reproduction of those used in Congolese healing and fertility rites. He and Picasso were both drawn to its expressive language. That carving appears in Matisse’s 1907 painting “Still Life with African Statuette,” and, for the first time, the painting and object are displayed together.

In 1912, painter Clara T. MacChesney interviewed Matisse for an article in New York Times Magazine, and asked him, “What is your theory on art?” He replied by pointing to a table with a jar of nasturtiums. He said, “I do not paint that table, but the emotion it produces upon me.”

Over the next couple of years, Matisse would purchase 20 masks and figurines made in Northern and Central Africa. He took a cruder and more direct approach in depicting nudes, as seen in “Young Women,” a bronze from 1907-08. Critics reacted harshly to it and similar works, saying that Matisse strained in his abstraction and these works were “ugly” and the colors “cruel.”

Matisse noted that some African works depicted the human form as genderless or possessing both female and male characteristics. Thus, he decided to apply this idea in the bronze “Young Women.” From one angle, the two figures appear to be women embracing. From another angle, one figure rises a bit taller and has a more wide-legged stance and mannish appearance.

“Why?” MacChesney asked Matisse during their interview, when she spotted a lumpy and crudely formed female figure, from this same generation of sculptures. Matisse reached for a Javanese statue with a disproportionately large head and asked, “Is not that beautiful?” She thought not. Likely he was being coy with her, knowing she didn’t see the human body could be beautiful and expressive without being classically rendered.

The tribal sculptures also inspired Matisse to reinterpret portraits. In painting his 13-year-old daughter, “Marguerite” (1906-07), he wanted to evoke the emotions of innocence and childhood. So he created her portrait with the simplicity of a child’s painting with flattened features, minimal details, and even what seems like a mistake — a profile nose on a frontal face. Even the letters of Marguerite’s name across the top are scrawled as though an inexperienced hand drew them.

Yet the face looks more like a woman’s, and Matisse knew very well his daughter was growing up. In the portrait, the girl wears a black velvet choker, which seems to separate her body from her head, as if she’s wearing a mask. Coincidentally, when Matisse and Picasso decided to trade paintings, Picasso chose this one. He hung it in his studio next to a Punu mask. Perhaps he saw the mask too.

Some accuse the modernists of having culturally pillaged tribal art, while others point out that the African artists and cultures went mostly unattributed. This exhibition, which alludes to but doesn’t explicitly discuss these tensions, aims to put Matisse’s influences front and center.

Matisse had a lifelong appreciation of fine tapestries, which began during his student days at École Quentin De La Tour, a textile designing school near Belgium. After he’d traveled to Morocco and Spain and saw an exhibit of Islamic art in Munich, he became enamored with Islamic architecture, design, and fabrics. He acquired at least a half-dozen haitis, which are sumptuous, pierced, and appliquéd textiles that often bear a mihrab motif — the arch shapes and latticework found in the niches of mosques.

In “The Moorish Screen” (1921), Matisse places a blue-green haiti in the room’s corner, hiding the juncture where two walls meet. Doing this envelopes the two women, dressed in pale, simple frocks, in a rich collage of patterns and jeweled colors. The eye normally tracks towards human figures, but here it’s drawn to the room’s lively décor where it spins before going towards the women.

One of most fascinating connections made in this exhibit comes from a 19th-century wood panel on which four Chinese calligraphy characters are made with quick, lyrical gestures. A 1951 photograph by Philippe Halsman shows Matisse making cut-outs in bed. Above him hangs this calligraphy panel, and below each character hangs one of Matisse’s gestural nude drawings, much like those in his “Acrobat” series. By this point in his life, he worked spontaneously, reducing the human form to a few lines, and showing complete total control over his application of ink.

Searching for source materials, Matisse traveled extensively and gathered works from China, Egypt, Morocco, Java, Tangiers, the Congo, Europe, and elsewhere. He had eclectic tastes and could find beauty and inspiration just as easily in a silver chocolate pot as a disproportionate statuette. Matisse was interested in how other cultures viewed life, thought about gender, and expressed beauty. His abstraction of the figure and borrowing from other cultures may have baffled viewers at the onset, but over time such experiments would become the hallmarks of modernism.

Matisse in the Studio continues at the Museum of Fine Arts (MFA), Boston (465 Huntington Ave, Boston) through July 9.