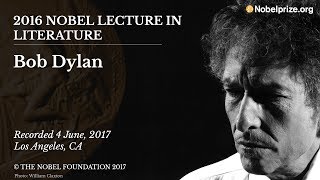 The furor surrounding Bob Dylan’s Nobel Prize win in Literature last October now seems several ages away. What was all that about again? Could it possibly have meant, as many a disgruntled writer suggested, that “people don’t care about books anymore”? Was this an “ill-conceived nostalgia award,” as Irvine Welsh bitterly proclaimed, bestowed by a committee of “senile, gibbering hippies”? Even Dylan himself seemed confused and embarrassed. He remained silent after the announcement, ignoring the Swedish Academy’s calls and seeming to one Academy member “impolite and arrogant.”

As anyone who has ever seen a Dylan interview from the mid-sixties can attest, these qualities once defined his public persona. And yes, he isn’t nearly as culturally relevant now as he was in those days, when he played the near-untouchable superstar and mercurial pop culture savant. But the Swedish Academy voted to celebrate Dylan as a literary writer, not a celebrity. And while writers may fall in and out of fashion, we like to think of literature as timeless. Many, perhaps most, authors awarded the Nobel have been “past their prime,” in the sense of having a lifetime’s worth of work behind them. Dylan is certainly no exception.

The question of whether folk and rock and roll songs can be properly considered literature is another matter, but you’d have to be naïve not to know that all literature began its life as song. Maybe much of it will return to this primordial state in the future. Sensing that songcraft needed an advocate before critics of literature, when he recorded his Nobel lecture–with musical accompaniment, on June 4th, six months after his win (hear him read it above)–Dylan discussed the interdependence of the two. He pointed to Homer’s Odyssey, an epic song in verse before it assumed written form, as the source for not only so much Western literature, but also so much American folk song, including his own.

“The Odyssey is a great book whose themes have worked its way into the ballads of a lot of songwriters,” says Dylan, then he concedes that “songs are unlike literature. They’re meant to be sung, not read.” That’s okay. “The words in Shakespeare’s plays were meant to be acted on the stage,” not read by groups of students in uncomfortable desks and airless rooms. No one became furiously angry when playwright Harold Pinter won the Nobel Prize in 2005. Should they have? But Dylan doesn’t pursue this line of reasoning, and he doesn’t necessarily compare himself to Shakespeare. Not quite…. 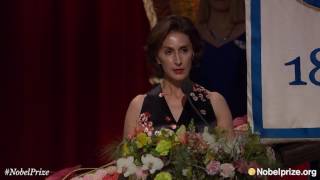 He did, however, make a similar argument in his short acceptance speech (read it here)—which he wrote and handed to the U.S. Ambassador to Sweden, Azita Raji, to read in his place at the ceremony (see her deliver it above)–asking whether Shakespeare, and hence Dylan, should be considered literature: “I would reckon he thought of himself as a dramatist… I would bet that the farthest thing from Shakespeare’s mind was the question ‘Is this literature?’” Like Shakespeare, Dylan writes, he has been busy with the exigencies of touring, creating ensembles, and performing: “not once have I ever had the time to ask myself, ‘Are my songs literature?’” (Believe that or not.) He thanks the Swedish Academy for taking up the question, and “for providing such a wonderful answer.”

In his newly-released recorded lecture, at the top, Dylan also doesn’t answer the question directly. He carefully considers it—“wondering, exactly, how my songs relate to literature.” He confesses needing to “reflect on it, and see where the connection was.” It is in the influence of The Odyssey, Moby Dick, All Quiet on the Western Front and other great works. It is also, he suggests, in the way music participates in literary traditions, trading similar themes and establishing similar affiliations. But he expresses no commitment to collapsing the distinctions between them. “His apparent attitude throughout the process” of winning the Nobel Prize, writes Emily Temple at Lit Hub, “has been… something along the lines of: ‘okay, if you say so.”

“The fact that Bob Dylan doesn’t consider his songs literature doesn’t make them not literature, of course,” writes Temple. We’re free to agree or disagree with him, but in either case his lecture might make us “consider the possibility that they will become literature, as William Shakespeare’s plays have.” By that time, Shakespeare was long dead. While he still lives, Dylan concludes, “I hope some of you will get the chance to listen to these lyrics the way they were intended to be heard: in concert or on record or however people are listening to songs these days. I return once again to Homer, who says, ‘Sing in me, oh Muse, and through me tell the story.’”

You can read the transcript of Dylan’s lecture here.