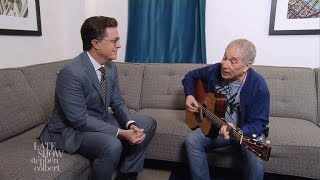 No matter which side of the political divide you might be on, 2017 has felt like a fairly tumultuous year for a number of reasons — and Paul Simon tapped into the unsettled state of our great nation during his appearance on The Late Show With Stephen Colbert last night (Wednesday).

In the segment above, Simon is sitting backstage with Colbert, who asks him why his live set lists no longer contain the Simon & Garfunkel number “The 59th Street Bridge Song (Feelin’ Groovy),” originally written and recorded for the duo’s 1966 Parsley, Sage, Rosemary and Thyme LP.

“Oh, I loathe that song,” Simon responded. “It just feels naïve, you know? It just doesn’t feel like 2017.” Asked to explain what he meant by “naïve,” Simon explained that it reflected the “wrong mood” for everything going on in the world today; ever helpful, Colbert offered to help him rework the song’s lyrics for modern times.

The duo’s decidedly less groovy — yet pointedly political and, depending on your persuasions, pretty funny — new additions included a number of references to current events, including “Hello lamppost, nice to see ya / We might get bombed by North Korea” and “”Kellyanne Conway makes no sense / And even if Trump goes, we’re stuck with Mike Pence.”

Simon’s appearance on The Late Show wasn’t restricted to backstage banter with Colbert. He reappeared later in the episode to perform his So Beautiful or So What song “Questions for the Angels” with an assist from guitarist Bill Frisell, which you can check out below — and as previously reported, you can also catch Simon on the road this summer, starting next month.