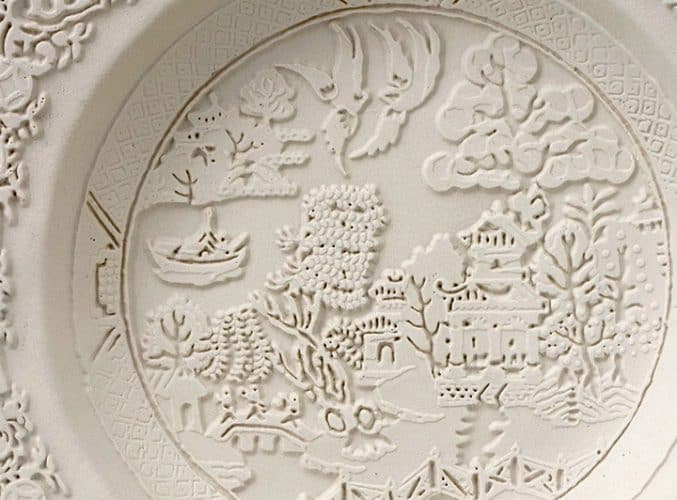 Trying to imagine the original state of these rough-edged antique plates is part of the intention behind these sculptures by Helskini-based artist Caroline Slotte (previously), whose artworks often involve aspects of memory and the physical reduction of objects while still retaining the original meaning. For her 2015 series Tracing, Slotte reworked several ceramic plates utilizing a complex sequence of masking and sandblasting to transform painted 2D images into textural 3D reliefs. She explains in an interview with the Houston Center for Contemporary Craft:

In [the] Tracing Series, I used a process of repeated masking and sandblasting to remove the glaze and the printed imagery step-by-step. When sandblasting the sand eats away on everything hard. Anything soft and flexible, such as the glue I use for masking, remains, the sand cannot penetrate it. I work my way down, layer by layer, rendering the motif three-dimensional, until the image is transformed into something resembling an imprint or an X-ray, as though a memory of the image had sunk into the plate.

Through each artwork Slotte references not only the history of an image applied to a plate, but also the second-hand object itself, while creating something entirely new. You can see more of her work at Ferrin Contemporary.