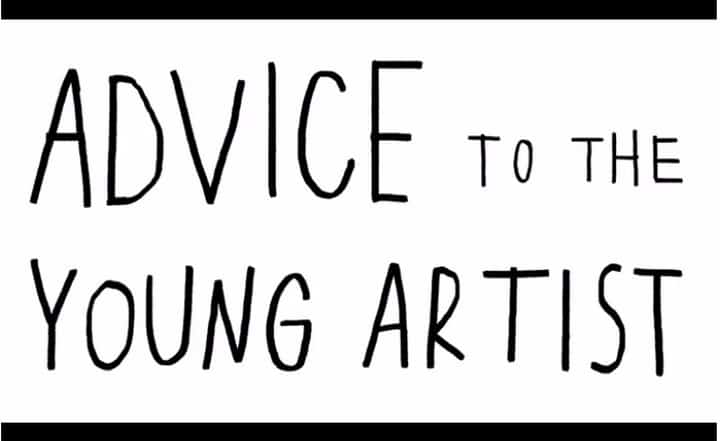 Note: There are a couple brief not-safe-for-work moments in this film.

Patronizing, ponderous, well-meaning, self-aggrandizing, incoherent… young artists are subjected to a lot of unsolicited advice, and not just from their parents.

But what happens when a young artist actively seeks it out?

Daniella Shuhman turned to the Louisiana Channel’s series, “Advice to the Young,” feasting on the collected wisdom of such heavy hitters as performance artist Marina Abramovic, author Umberto Eco, artist Olafur Eliasson, and the multitalented Godmother of Punk, Patti Smith in preparation for her final project at Jerusalem’s Bezalel Academy of Arts and Design.

Her resultant short film, above, appears to be the work of a deliriously aggro inner child, one with a keen bullshit meter and an anarchic sense of humor.

“The most important advice I have is to have fun,” counsels novelist Jonathan Franzen—a man who allegedly wrote The Corrections while wearing earplugs, earmuffs, and a blindfold, then busted on Oprah Winfrey when she chose it for for her Book Club.

At least Franzen bothers to sound encouraging… much more so than Abramovic, or fellow novelist Richard “Talk Yourself Out of It If You Possibly Can Because You’re Probably Not Going to Be Very Good At It” Ford.

(Parents struggling to come up with tuition may be relieved to learn that Ford’s on leave from Columbia University this term.)

Meanwhile, Shuhman breaks for NSFW territory to visualize artist Eliasson’s advice, a move that would surely please another Louisiana Channel personality, cartoonist David Shrigley. Perhaps it can be his consolation prize for not making the cut.

The pulsating reproductive organs aren’t entirely inappropriate. Listen to Eliasson’s full interview to hear him equate making art with making the world. Now that’s the sort of advice that will put a young artist to work!

Some of the more generous advice:

Build a good name, keep your name clean, don’t make compromises, don’t worry about making a bunch of money or being successful.

Don’t be embarrassed about what excites you.

If you are doing something weird that everybody hates, that might be something worth looking into and worth investigating.

Make your own way in the world. Wrap up warm. Eat properly, sensibly. Don’t smoke and phone your mom.

We love imagining the sort of unfettered advice Shuhman will one day be in a position to dispense.

No Thoughts on Patti Smith, Umberto Eco & Richard Ford Give Advice to Young Artists in a Rollicking Short Animation
0 (0)