This year’s Women’s History Month theme is “Honoring Trailblazing Women in Labor and Business.” Before these lionesses are hustled offstage in order for us to refocus our attentions on Asian/Pacific Americans, Jewish-Americans, Autism Awareness, Multiple Births, Sexually Transmitted Disease Education, pecans and the myriad other calendar girls and boys that April brings, let’s join video essayist Catherine Stratton in celebrating the achievements of filmmaker Alice Guy-Blaché, above.

While not an officially recognized honoree, Guy-Blaché, who made over 1,000 films over two decades, definitely qualifies as a trailblazing woman.

At age 21, she became the first female director in cinema history with The Cabbage Fairy, below, a whimsical, if not particularly accurate vision of where babies come from. (It was shot in 1896, long before rules limiting the amount of time a newborn actor can spend on set, but only a handful of years before nurse Margaret Sanger took up the cause of women’s reproductive health.)

She tackled the Life of Christ with a passel of animals, special effects, and 300 extras. 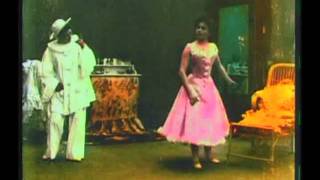 She built a state-of-the-art film studio in Fort Lee, New Jersey, pruning the terrain to serve as a variety of landscapes.

Viewed from the lens of 2017, one of her most startling achievements is 1912’s A Fool and His Money, an excerpt of which is below. The tale itself is an unremarkable crowdpleaser: a poor guy falls in love with a wealthy young woman. He goes to great lengths to woo her, outfitting himself with fancy duds and throwing a huge party, only to be bested by a flashy rival.

What is remarkable is that Guy-Blaché was white and the film’s cast is entirely African-American. According to essayist Stratton, the characters are portrayed with none of the explicit racism DW Griffith brought to The Birth of a Nation three years later.

As Amy Poehler’s Smart Girls site reports, Guy-Blaché passed from the public view after an expensive divorce from her philandering husband forced her to sell her studio. She struggled to gain public recognition for her pioneering contributions to film history with little success. A Fool and His Money was rediscovered when a flea market shopper bought a musty chest of old, unmarked reels.

Like that film, her reputation is slowly being restored to its former glory. She was awarded France’s Legion of Honor in 1955 and a Director’s Guild of America Lifetime Achievement Award in 2012.

Give this trailblazing woman another look!

This Is a Poem That Heals Fish: An Almost Unbearably Wonderful Picture-Book About How Poetry Works Its Magic
0 (0)