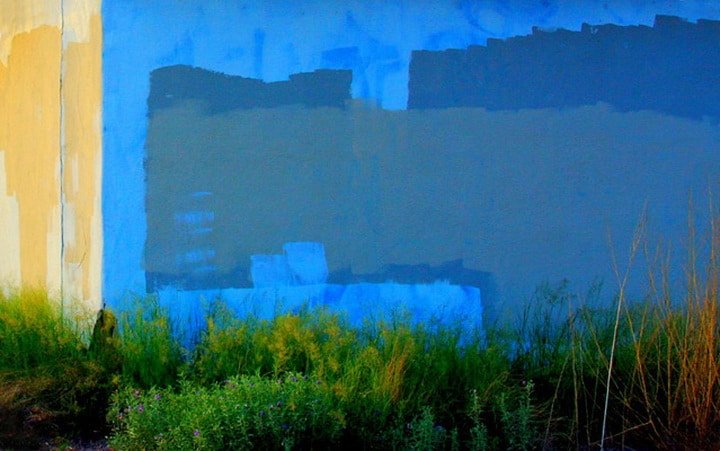 Las Cruces, New Mexico-based photographer and artist Mattie Kannard has spent the past eight years photographing graffiti, but only after it has been painted over by the building owners. The results often resemble an unintentional pastiche of Mark Rothko’s style of abstract expressionism.

She explained her love for “graffiti removal” in an essay posted to accompany her Flickr album titled “Paint Over.”

“I love graffiti. But I love buff even more. When graffiti is removed, it is “buffed.” It gets painted over. As in, “Man! That tag I did last night was buffed this morning.” Before I knew the correct term, I called a buff “paint over,” and in 2009 I started taking and collecting photographs of graffiti that had been painted over. Over the last three years I’ve amassed almost two hundred pictures of beautiful buffed pieces.

Graffiti artists and property owners have an unspoken agreement to be in dialogue with each other. The artist starts a conversation with a tag, a mural, a phrase, an image. The property owner replies with a buff, a paint-over designed to erase the graffiti and discourage a repeat performance.

There’s one problem. In most cases, the paint used to cover the graffiti doesn’t match the original wall or surface paint. When people want to cover graffiti fast, they use what they have on hand – a leftover can or bucket of color, rarely even a distant cousin of the current palette. So instead of erasing the art, the buff becomes art itself… a wonderful, sometimes clumsy, sometimes precise, statement of color – an unintentional ode to what once was. This contrast, this visual band-aid, is what becomes so beautiful. The tag isn’t forgotten, it is unwittingly translated, transformed. It becomes simple, striking, an abstract skin.

Shapes emerge, sometimes vague, amorphous blobs or awkward angles, but more often geometric wonders created by paint rollers as they glide over a graffiti artist’s organic, snakelike scrawls. Corners contain expanses of color, sometimes in a neat rectangle or square. These are often the most striking buffs, but I also love the captivating, irregular shapes, the number of sides dictated by the highs and lows of the graffiti tag, the buffer’s paint roller guided by the spray can strokes of the original artist.” Graffiti removal was also the subject of a documentary directed by Portland-based filmmaker and music video director Matt McCormick in 2001. Narrated by Miranda July and based on original ideas and concepts of Avalon Kalin, this sixteen minute film makes an amusing, tongue-in-cheek argument that graffiti removal has “secured its place in the history of modern art while being created by artists who are unconscious of their artistic achievements.”