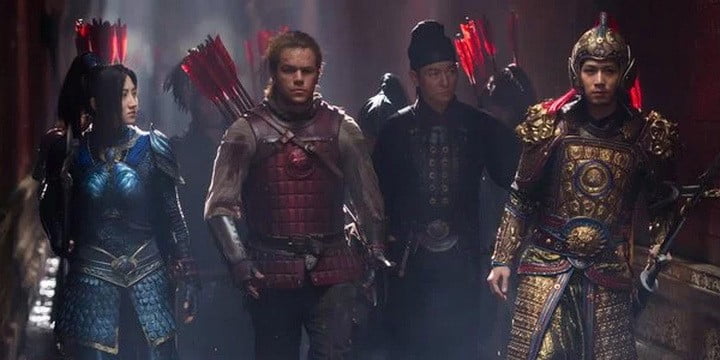 The use of 3D has had its ups and downs since Avatar blew people away back in 2009, but there is one consistent story that we hear about the technology: it’s very popular in China. As such, it’s absolutely no surprise that director Zhang Yimou’s new film, The Great Wall will be arriving to theaters in this format. What isn’t known, however, is whether or not it will be worth shilling out a few extra dollars for the added experience.

You’ll find our full review of The Great Wall in the review section of our site, and instead what you’ll find below is only a breakdown of the movie’s use of the third dimension. To 3D or not to 3D is the question, so read on for the answer…

In the world of 3D, big action blockbusters and animated movies reign supreme, largely because of the extensive use of computer generated effects that allow environments to be manipulated and make better use of the technology. As the story of warriors facing off against a seemingly endless horde of alien beasts, The Great Wall most definitely qualifies for top marks in this category, and receives them.

The way we view “Planning and Effort” in 3D has changed greatly over the years. It used to be that a perfect score could only be earned if a film is shot natively in 3D, but that was mostly because early post-conversion efforts (cough Clash of the Titans cough) were basically assaults on the eyes. With incredible advances in post-conversion, this narrative has changed, and therefore we can reward The Great Wall with a 5 in this category. For reasons mentioned earlier, this movie was always crafted with the third dimension in mind.

BEFORE THE WINDOW SCORE  4/5

Hollywood movies have generally become disappointments when it comes to the Before The Window aspect of 3D, with many filmmakers concerned that throwing items out at the audience is hokey. The reality, however, is that it’s actually the most fun aspect of the experience, and Zhang Yimou and his team make terrific use of it in The Great Wall. It’s never as much as you really want, but all of the swords and spears being thrown around do create plenty of opportunities for audiences to duck and avoid weapons being tossed at their faces.

BEYOND THE WINDOW SCORE  2/5

It’s common that a give and take is created between the Before The Window and Beyond The Window aspects of 3D, and The Great Wall is no exception. For while it’s great that the movie makes the decision to penetrate the screen into our world, the sense of depth isn’t quite as impressive. To the film’s credit, there is one fog-covered sequence and camera move that does authentically create a sense of vertigo, but this aspect of the third dimensional experience isn’t quite as big a priority for the post-conversion team.

Zhang Yimou actually has a bit of an advantage when it comes to brightness in 3D. Throughout his career, the filmmaker has made a point of accentuating color wherever possible — and that particular aesthetic choice is all over The Great Wall. With full disclosure, this aspect of the third dimensional experience is partially subjective, as different theaters project 3D movies at different levels, but my personal screening was in no way marred by a dim, fuzzy screen caused by wearing the specialized glasses.

A simple yet effective way of gauging a film’s use of 3D can be discovered simply by lifting your glasses during any particular scene. Because of the way the stereoscopic experience works, not using the special lenses reveals the different levels of depth that are being used to accentuate a given scene. When I did this during my screening of The Great Wall, I got mixed results. As you would expect, action scenes were great in this department, sometimes so blurry that they were unwatchable, but the more calm scenes involving character drama and dialogue didn’t feature much of the effect at all.

After brightness, this is perhaps the second most subjective category in our To 3D features. Some people simply can’t ride out the experience, feeling nauseous and dizzy by the effect no matter what. That being said, filmmakers can take steps to prevent some of the worst aspects of 3D, and the people behind The Great Wall definitely did a great job. I didn’t feel sick at any point watching the movie, and walked out feeling just as healthy as I did going in.

Final Verdict: Whether or not you should actually pay money to see The Great Wall is its own question, but if you’re making plans to see it, it’s definitely worth paying for the 3D. Much like Ghostbusters last summer, it’s a movie that’s not afraid to use the more gimmicky aspect of the presentation style, and it’s a much better theatrical experience for it. Zhang Yimou’s camera work definitely works well with the technology, and it makes for a good time. It’s definitely some of the best 3D we’ve seen in movies recently.

No Thoughts on To 3D Or Not To 3D: Buy The Right The Great Wall Ticket @Cinemablend
0 (0)