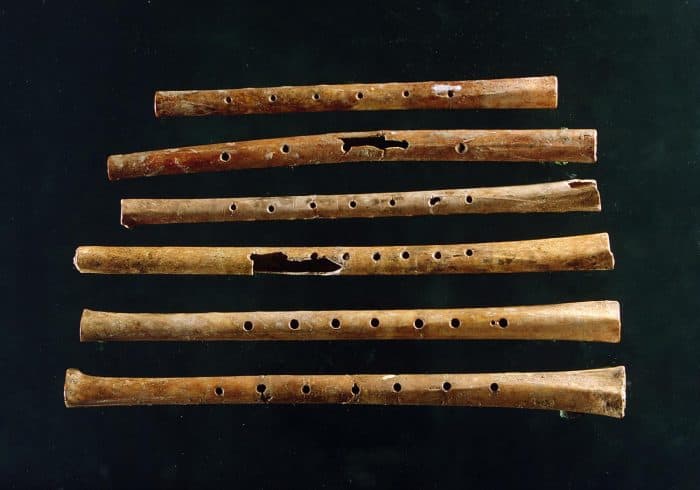 Classical music enthusiasts seem to agree that the renewal of interest in period instruments made for a noticeable change in the sound of most, if not all, orchestral performances. But doesn’t the replication and use of viols, ophicleides, and fortepianos from the times of Bach, Beethoven, and Mozart raise a curiosity about what people used to make music generations before them, and generations before that? How early can we get into early music and still find tools to use in the 21st century? Since the end of the 20th, we’ve had the same answer: about nine millennia.

“Chinese archeologists have unearthed what is believed to be the oldest known playable musical instrument,” wrote Henry Fountain in a 1999 New York Times article on the discovery of “a seven-holed flute fashioned 9,000 years ago from the hollow wing bone of a large bird.”

Those holes “produced a rough scale covering a modern octave, beginning close to the second A above middle C,” and the fact of this “carefully selected tone scale indicates that the Neolithic musicians may have been able to play more than single notes, but actual music.”

You can hear the haunting sounds of this oldest playable musical instrument known to man in the clip above. When would those prehistoric humans have heard it themselves? Fountain quotes ethnomusicologist Frederick Lau as saying that these flutes “almost certainly were used in rituals,” perhaps “at temple fairs, burials and other ritualistic events,” and possibly even for “for personal entertainment.” 9,000 years ago, one surely took one’s entertainment where one could find it.

If this listening experience has given you a taste for the real oldies — not just the AM-radio but the history-of-mankind sense — you can also hear in our archive the 43,000-year-old “Neanderthal flute” (found only in fragments, but reconstructed) as well as such ancient songs as 100 BC’s “Seikilos Epitaph,” a composition by Euripides from a century before that, and a 3,400-year-old Sumerian hymn known as the oldest song in the world, all of which raises an important question: what will the people of the year 11000 think when they unearth our DJ rigs, those artifacts of so many of our own ritualistic events, and give them a spin?

You can get more information on this ancient flute here.