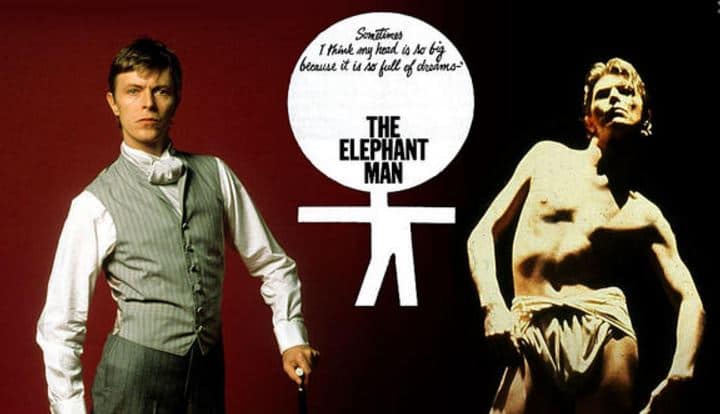 This weekend brings the first “would have been” birthday for David Bowie, who would have turned 70 this Sunday, January 8. Of course, it’s been almost a full year since Bowie passed away of cancer two days after turning 69.

Bowie’s first and only attempt at an extended run as a stage actor occurred in 1980, when he took on the role of John Merrick in Bernard Pomerance’s play The Elephant Man, which had debuted at the Hampstead Theatre in London in 1977. As with many of the projects Bowie took on, it was a decided challenge and proved to be a striking success. Bowie had just spent a few years hanging out with Iggy Pop and Brian Eno in Berlin producing some of his most interesting albums—the timing of the request to replace the existing actor Philip Anglim, made by Jack Hofsiss, the director of the Broadway production, which had already done very well and which Bowie had already seen, was surely critical, as Bowie was likely seeking a change at the time. There was also a certain resonance in playing a type of Victorian monster since his most recent album bore the name Scary Monsters (And Super Creeps).

Bowie had such a striking physical presence, so ideal for the role of Thomas Jerome Newton in The Man Who Fell to Earth as well as for the physically deformed John Merrick in Pomerance’s play, which makes the interesting choice of eschewing makeup for the actor. The David Lynch movie that came out around the same time has no connection to Pomerance’s play, with its own, separate development. Oddly, both movie and film insist on referring to the historical Joseph Merrick as “John Merrick.”

As Bowie tells it, the producers of the play had Bowie try the role away from the intense media scrutiny of New York, so he did the play for six days (July 29-August 3, 1980) at the Denver Center of Performing Arts, where he could “die a quiet death” if it emerged that he wasn’t up to the challenge. After three weeks in Chicago at the Blackstone Theater, Bowie’s debut as a Broadway actor came on September 23, 1980, at the Booth Theatre for a run of a little longer than three months.

Last year, in honor of Bowie’s passing, the Australian TV program Rage played more than 10 minutes of footage of Bowie and Donal Donnelly playing Merrick and Treves. More than a decade earlier, Donnelly had been one of the leads in Richard Lester’s film The Knack …and How to Get It.

Clips of Bowie as Merrick have been available on YouTube for a while, but the Rage compilation is the longest I’ve seen, by far. 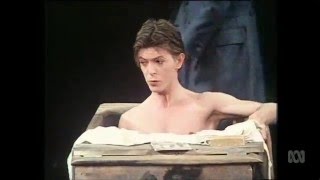 While Bowie was doing the role on Broadway, frequent Andrew Lloyd Webber collaborator Tim Rice had a lengthy interview with him about it. This “Elephant Man Interview Special” also features snippets from the play but not nearly as much: 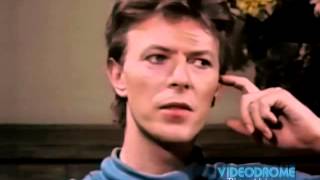 In this clip Kathryn Johnson, one of the curators of the recent David Bowie exhibition, says a few words about Bowie’s turn as the Elephant Man: 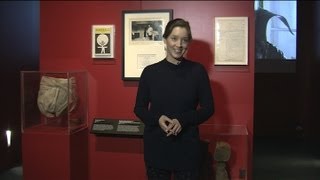