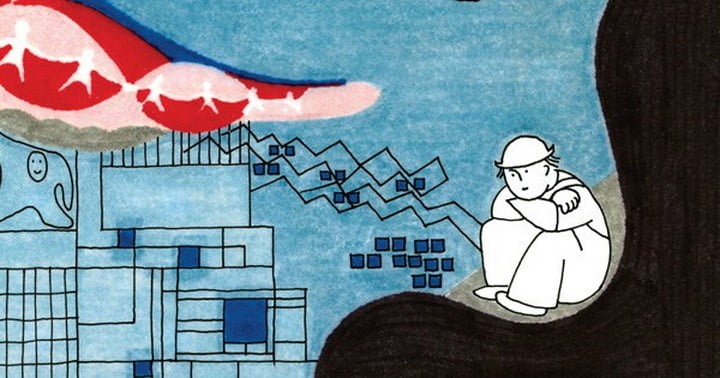 “The crucial job of artists is to find a way to release materials into the animated middle ground between subjects, and so to initiate the difficult but joyful process of human connection.”

We inhabit a curious moment in culture, one in which our collective outrage at systemic injustice and the resulting sense of political helplessness have driven us to assert our agency in ways not always constructive — by mistaking self-righteousness for morality, by operating from a reactionary place of indignation rather than a generative place of creative tension-holding and considered response, and above all, by relinquishing our willingness to explore the nuance and complexity beneath the blind literalism with which we have come to interpret cultural material.

How art helps us reclaim that capacity for nuance is what poet Ann Lauterbach (b. September 28, 1942) explores with uncommon intellectual elegance and largeness of heart in The Night Sky: Writings on the Poetics of Experience (public library).

Poems, and artworks in general, are not only pleasant distractions, entertainments; not just icing on the cake of life. I don’t want to claim that poetry is good for you the way walnuts are. But good poems reconfigure the place between acts of perception and response, mental conception and material structure, in sets of particulars that keep the new(s) from shredding existence into repetitious and interminable platitudes.

To write poetry in America is in itself a subversive act, a refutation of, and resistance to, certain assumptions about what constitutes “the public” and its interests.

One can see better from the periphery than from the center.

In a sentiment that calls to mind poet Elizabeth Alexander’s wise words about how poetry furnishes culture with necessary multivocality and polyphony, Lauterbach considers this democratizing and pluralizing power of all art:

We make music, painting, sculpture, films, novels in order to mediate our mortal visiting rights: a specifically human wish to intercede, to punctuate the ongoingness of time and the seemingly random distributions of nature. This punctuation is called history or, more precisely, culture, or, more precisely still, history of culture, now understood as a great plurality: histories, cultures. It turns out they — the its of history and the its of culture — are multiple and various, not linear and single.

But art, she argues, only invites such plurality if we learn to inhabit its layered dimensions. More than forty years after Susan Sontag admonished against treating art and cultural material as “content,” Lauterbach offers a percipient and increasingly necessary taxonomy of form, subject matter, content, and meaning:

Artists choose their materials and from these decide how to put things together. All artworks are, at the most basic level, simply an accrual of relationships that are the result of choices: this, not that. Form is the result of the convergence of subject matter with the limits of material and the artist’s choices regarding that material; this convergence of subject matter with form releases content. Meanings arise when persons — the reader, the spectator, the audience — engage with this content; meaning occurs in the mind and heart of the person who reads the poem, studies the picture, listens to the sonata.

But if shared meaning, as the great physicist David Bohm believed, is the glue that holds people and societies together, the moment we begin warping and fragmenting meaning we risk slipping into social divisiveness. In a sentiment of piercing pertinence to our present cultural climate, in which the complexity of artistic intention and meaning is often flattened or altogether obliterated by blind and belligerent literalism that fails to see beyond form and “content,” Lauterbach adds:

It is important to acknowledge this elastic space of meaning, where what the artist or writer intends and what the reader or spectator apprehends are not necessarily in perfect alignment. It is perhaps even more important not to confuse subject matter with content; this habit, reified by journalism, threatens to obliterate the power of form to both instruct the imagination and animate our critical discernment beyond the reductive literalism that has come to dominate our lives.

The best way to mitigate that destructiveness, she suggests, is by allowing ourselves to wander in language and meander in meaning instead of beelining to some hollow and reactionary conclusion. A generation after Italo Calvino contemplated the role of digression as a hedge against death, Lauterbach considers the vitalizing power of digression in restoring our capacity for nuanced wonderment:

Digression is for me one of life’s pleasures; I rarely get from point A to point C without wandering through patches of Z or thickets of S. When I was young, I often fell asleep listening to a recording of John Jacob Niles singing the haunting spiritual that begins, “I wonder as I wander out under the sky / Why Jesus our Savior was brought forth to die.” I remember feeling a kind of pleasurable fear in these lines, with their rhyme of “why” and “die” and the curiously close affinity between “wonder” and “wander.” Perhaps these became twinned in my consciousness, separated as they are by only a single vowel. The fact that “wonder” flickers between awe and doubt, and that “wander” contains the magician’s wand as well as the possibility of a lost destiny, might serve as an example of my mind’s desire to bear witness to the fluctuating boundaries and nascent discoveries of language.

Reflecting on the impulse “to wander in language to the point of getting lost,” Lauterbach weighs the unparalleled potency of this “search for a quotidian sublime”:

Linear argument, where one thing leads ineluctably to another, is of profound practical and rhetorical value, but necessarily it discourages vicissitude and ephemera, ambivalence and dead ends, ruminations that suggest a different mental economy, one that could affect conclusions beyond the restraint of reasoning logic. Such disparate discourses as, say, jurisprudence, medicine, and poetics share an interest in the observable world. But, as we have become increasingly aware, for each of these, objective knowledge and judgment are inevitably colored by subjective predilections, cultural traditions, personal desires, ideological constraints.

In a sentiment of especial poignancy today, and one reminiscent of Rebecca Solnit’s insightful lamentation of modern noncommunication, Lauterbach adds:

I believe we learn to know by doing what we care about, and that this doing is the best route to a life well spent. The relation between doing, knowing, and caring is embedded in reciprocity; and reciprocity is contingent on receptivity. But listening, taking things in — what others say, how they think, what they do — these seem endangered in our culture of personal enterprise and one-way conversations with screens.

But perhaps it is already a paltry cliché to say that experience itself is threatened by our culture of mediated distraction… And yet I want to imagine that the ways in which we come to trust each other, to value our perceptions and interpretations, still owes something to how we think about what we love and what we abhor, to the events in our lives that give rise to our commitments.

In a passage that calls to mind Ursula K. Le Guin’s abiding wisdom on the magic of real human communication, Lauterbach adds:

The crucial job of artists is to find a way to release materials into the animated middle ground between subjects, and so to initiate the difficult but joyful process of human connection. This is not only the relation of a given self to a given other, but to show how that relation might move further to a consciousness of persons and publics beyond our familiar horizons.

Out of that relational consciousness arises what Lauterbach considers the most urgent site of meaning in our experience of art — the singular way in which it confers dignity and agency upon us:

When we are moved by an aesthetic object, a poem or a piece of music or a painting, we experience a dual gladness: that the artist has made these choices and, by extension and analogy, that we, too, are capable of making choices. This second sense is not always (perhaps only rarely) conscious, but I think it contributes to the power art has to change our senses of ourselves as agents in the world; how we might shift from passive spectators or consumers to active participants, interpreters, innovators. Art serves no practical purpose, but to engage with it fully is to acknowledge the (pleasurable, if often difficult) consequences of choice at the crux of human agency… Artworks can disrupt the degradation of choice as the site of, and synonymous with, commodification (consumer preference) and (re)align it with the rewards of independent determinations of value — processes of aesthetic discernment and critique seen as part of a continuum across individual, social, political terrain. Choice confined to the marketplace endangers the very core of participatory democratic processes.

With chilling resonance to our age of vacant “content” and fake “news,” Lauterbach adds:

As long as works of imaginative response and interpretation … are viewed by the culture at large, the general public, as either decorative entertainment or private, elitist distraction, and not, to borrow Emerson’s phrase, as “beautiful necessity,” then we are in danger of a perfunctory, reductive literalism. We lose our bearings, become mere tokens of political or commercial expedience. Imaginative work is grounded in thinking about, and thinking through, the immediacy of events, both private and public, in order to draw from them objects, materials rendered into forms, that bring us closer to our sense of connection, our personal agency. Art asks to be interpreted, not just consumed; it asks us to suspend our judgment while we engage our senses. If the so-called “real” world of events is always remote, no matter how close our computer and TV screens, then our sense of engagement and response is in danger of shutting down. Art is a language which anneals individuals to each other through experiences that are uniquely human, that demand connection at the level of making meaning. If we lose our ability to make meaning — that is, to interpret, to find form in the raw materials of life — then we stand in danger of having meaning made for us, a rupture between what is said and what is done, between false intentions and disastrous consequences.

O Artigo Poet Ann Lauterbach on Why We Make Art and How Art Makes Us, foi publicado em Brainpickings.org

The Post: Poet Ann Lauterbach on Why We Make Art and How Art Makes Us, appeared first on Brainpickings.org