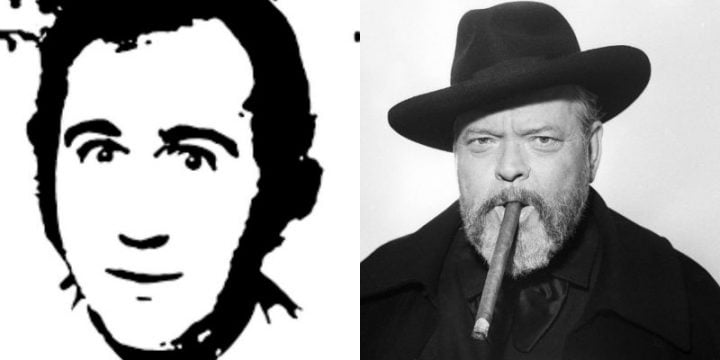 Orson Welles and Andy Kaufman were arguably the two greatest pranksters in American history. Welles infamously sparked an intense bout of public hysteria when his 1938 radio adaptation of H.G. Wells’ War of the Worlds conned thousands of radio listeners into believing that a Martian invasion of Earth was actually occurring.  Welles’ final finished feature film, 1974’s documentary F for Fake, about the notorious art forger Elmyr De Hory is a dazzling, intellectuality challenging masterpiece that can never quite decide if it’s a fake documentary about a painter of fake masterpieces who himself was the subject of a true biography written by a fake biographer (Clifford Irving)… or what it is.

Meanwhile, Kaufman’s legendary ability to take a premise beyond its breaking point was so developed that to this day many people still believe that he faked his own death 32 years ago. The two men not only met, but Welles interviewed Kaufman when he served as a replacement host on The Merv Griffin Show. Despite his notably curmudgeonly behavior in his advanced years, Welles genuinely gushed about Kaufman’s remarkable acting talents. The date of the show was June 25, 1982. Observing the proceedings was Barney Miller actor Ron Glass, who passed away earlier this week.

I was happy to learn that Welles appreciated the comedic heights achieved by Taxi, which he calls one of the few things on TV that is not a “criminal felony,” but it’s even more interesting to notice the man behind the Mercury Theatre, possibly the greatest theatrical ensemble ever put together, observe that Taxi, despite its marvelous cast, often fell short of its potential as an ensemble show because the plots were seldom confined to the taxi depot (which would have the effect of forcing multi-character interactions).

Welles acutely observes that “Nobody ever came from nowhere as completely as” Kaufman’s character Latka Gravas did. Kaufman comes out wearing a neck brace but never makes anything of it—this was no doubt a product of his wrestling escapades with countless female opponents.