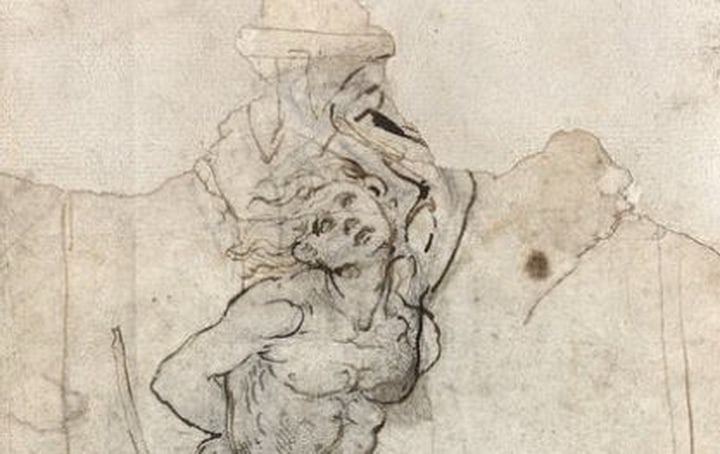 Drawing by Leonardo discovered in France @The Art Wolf
0 (0)

According to Tajan, “In the Codex Atlanticus, a list compiled by Leonardo, eight Saint Sebastians are mentioned. We currently believe that our drawing representing ‘The Martyred Saint Sebastian’ belongs to this illustrious group.” Tajan also published a statement by The Metropolitan Museum of Art: “In the scholarly opinion of Carmen C. Bambach, our expert on the drawings of Leonardo da Vinci, this is an exciting new discovery of an authentic double-sided sheet by the master (1452-1519).“

The drawing has been valued at 15 million euros ($15.8 million), but it is still uncertain if the French Government will allow its sale to a foreign buyer.

Leonardo da Vinci (1452 –1519). Recto: Study for a San Sebastian in a landscape. Verso: Two scientific studies, one shadows created by a candle and the other on the interplay of light and shadow. In addition, there are to reversed, hand-writen, partial texts. 19.3 x 13 cm
Source: Tajan Auction Hourse (www.tajan.com)

Recent allegedly discoveries of works by Leonardo
On October 2009, a leaf depicting “Young Girl in Profile in Renaissance Dress” or “La bella principessa”, made big news when it was attributed by some scholars to Leonardo da Vinci. A forensic art examiner claimed to have discovered a fingerprint very similar to one found on Leonardo’s “Saint Jerome in the Wilderness”. The work was quickly valued at $150 million. But many well-known experts, including Klaus Albrecht Schröder from the Albertina, Everett Fahy from the Metropolitan, and art historian Fred R. Kline; have strongly rejected this attribution. In 2011, the long-lost painting of the “Salvator Mundi” was exhibited at the great exhibition of Leonardo in the National Gallery of London, and then sold to a Russian collector for $127,5 million, according to sources. Recently, some experts claimed to have found a canvas depicting Isabella d’Este (related to the drawing now at the Louvre) in a Swiss Collection.