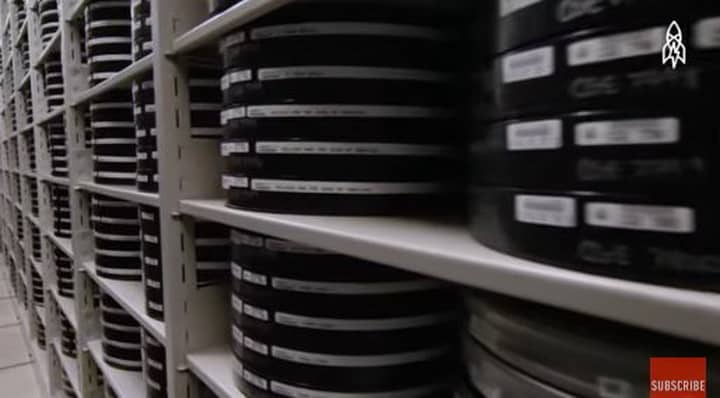 We’ve been given to understand how important it is that our top elected officials disappear into bunkers if the country is attacked. But in the event of a catastrophic nuclear bombing, what happens to the country’s culture, its shared literary and artistic artifacts? What happens to novels like Riddley Walker (a favorite of Anthony Burgess) or films like the Mad Max series, both of which describe post-apocalyptic landscapes nearly wiped clean of the traces of hundreds of years of human civilization? Maybe it’s a depressing question, but in the case of American cinema—as campy as Mad Max Beyond Thunderdome or as classically smooth as Casablanca—learning the answer will not bum you out.

You’ll likely find yourself riveted by the video above from Great Big Story, a quick tour of the Library of Congress’ Packard Campus. The Culpeper, Virginia compound, originally designed to preserve gold and maybe the President, is now pressed into service as a bomb-proof film archive.

You may be relieved to learn from film archivist George Willeman that a post-catastrophe U.S. will not have to rebuild without classic Bogart performances to draw from. Perhaps that new society could do without copies of Gigli or the films of Adam Sandler, but that’s an opinion the future is free to disregard, should such terrible things ever come to pass.

But be not bummed, the Packard Campus does much more than prepare for the worst. Archivists and technicians there spend their days saving the best of film history, “preserving and restoring film reels,” reports Indiewire: “The bunker has a suite where technicians do nothing but repair films, it also has specialized rooms for printing, film processing DataCine transfers and cylinder recording. There are also video players that can play any sort of format that they need.” The compound will also hold particular appeal for fans of Brutalist architecture that appears to be abandoned to the elements. Having driven by the bunker many times—and only recently learning what it was—I can testify to the imposing bulk and seeming ruination of its above-ground floors, which we only get a glimpse of in the first few minutes of the video. Inside, it’s a film historian and archivist’s dream.