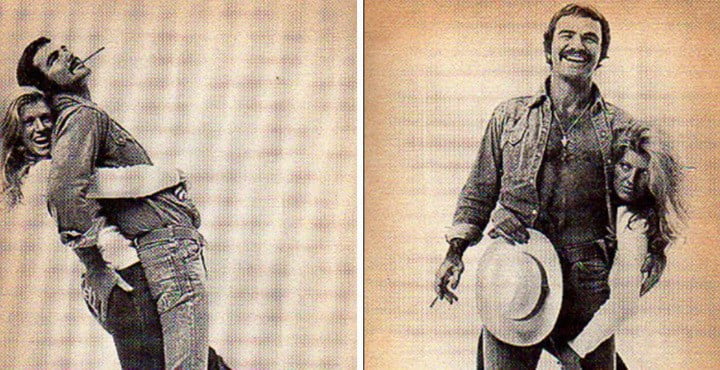 Burt Reynolds Hot Line: The Letters I Get.. And Write.

Burt Reynolds is America’s newest Sex Symbol, star of movies, TV, stage, and Cosmo centerfolds. Passion flower to eager femmes from 8 to 80, he is a virile, witty, gracious, warm, lovable, hotter’n firecrackers hunk of male who likes nothing better than reclining his fabulous fanny on bearskin rugs, rapping with his fans and their endless stream of letters. 1972 was big year for Burt Reynolds. He starred in Deliverance and posed naked in the April (Vol. 172, No. 4) issue of Cosmopolitan magazine. And there was this, the book in which fans got to talk with Burt. One night of heaven!

Now I know what it’s like to be an astronaut. For you, my darling, singlehandedly put me on the moon with your passionate embraces.

Return to me tonight, my ardent love-mate. You have opened my floodgates. and I swim out tempestuously to overwhelm you in the eternal waves of my unleashed love juices.

FLYING IN FORT WORTH

P.S. Don’t get scared. It was only a dream. A girl can dream can’t she?

I remember that night perfectly. We broke three water beds, tore up the rug in two rooms and banged the wallpaper off the wall… A guy can dream too, can’t be? MAN DO YOU EVER TURN ME ON! You’re great. When I told my husband  how I love you, he said, “Well, just pretend that I’m Burt Reynolds.” To which I replied, “Nobody in the world has got that much imagination!”

I have to tell you this funny thing that happened at the office where I work. We have this 60-yr-old supervisor (lady). When we showed her the miniature picture of you from Newsweek, she said, “Well, that doesn’t turn me on!” The rest of us girl decided it would take all the men in South America put together to turn her on.

But you’re just the hottest! If I knew my tropic zone number I would use it rather than my zip code. (Sin) – Cerely.

Why don’t you introduce your husband to the 60-year-old supervisor ? Forget about your tropic sone number and bone up on your erogenous zones. I am writing you for my girlfriend. She doesn’t think you will answer her. So I am taking the chance. Really all I would like  is a large picture of you. And at the bottom could you put, “To Melissa with love” and then sign your name ? This will thrill the shit out of her. Cause she thinks you’re everything.

Myself I think you are pretty cool, but you don’t really turn me on too much. But if you would just send me the picture with the stuff at the bottom I’ll go and see your next movie. Be cool.

You’ve got it. But frankly, Frank, I don’t want to “turn you on too much”. You said somewhere you like top have a letter start with a joke. So here goes.

One belly button to another:” Look at those two nuts trying to pull the log out of that swamp.”

Speaking of belly buttons, do you know where a woman’s belly button is located? Halfway between her pacifier and her satisfier.

In the Ozarks some mother suckle their young long past the normal weaning time. One such lad, nearly 14, approached his old man and said, “Paw, I just gotta have a little quid of that chewin’ baccy to get this milk taste out of my mouth… Maw’s been eating’ onions again!”

Mrs A: You’ve been going around telling people my husband has a wart  on the end of his apparatus.

Mrs B: I have not. I only said it felt like one!

Well, how do these grab you?

I used to like letters that started with a joke. I really dig everything about you. Your looks, your build, your sexy smile and deep bedroom eyes. And your moustache. Say, Burt, that moustache is a real womb broom.

Yours (any time, any place)

You are going too far , my dear, because you have set goals that are untouchable! From: A sex-starved chick

I must say I love your “moxy”! I can just visualise you sitting in a pub somewhere on the day the magazine was published, laughing your “fabulous fanny” off.

Even so, I must confess I have looked at the picture so many times I have every hair on your chest named. And some of them have beauts! If you ever bring your sweet body to San Jose, be sure to look me up. Surely I an think of some way to entertain you?! We could do worst than give names to the hairs you werw hiding.

All say I’ve been humming “Do you Know the Way to San Jose?” Via Poise And Charm