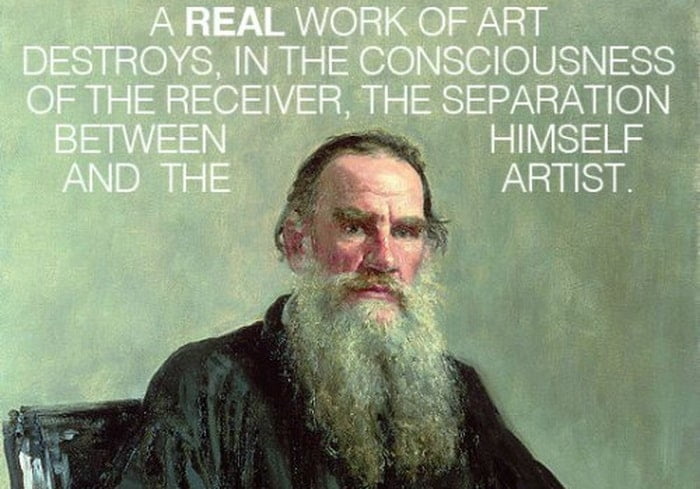 “A real work of art destroys, in the consciousness of the receiver, the separation between himself and the artist.”

By 1897, Leo Tolstoy (September 9, 1828–November 20, 1910) was already a literary legend of worldwide acclaim and a man deeply invested in his ultimate quest to unravel the most important wisdom on life. But he shocked the world when he published What Is Art? (public library; public domain) that year — an iconoclastic , which gave us Tolstoy’s addition to history’s finest definitions of art and which pulled into question the creative merits of Shakespeare, Beethoven, and even his very own Anna Karenina. Underneath his then-radical and controversial reflections, however, lies a rich meditation on the immutable, eternal question of what art — especially “good art” — actually is, and how to tell it from its impostors and opposites.

Tolstoy puts forth a sentiment Susan Sontag would come to echo decades later in asserting that “art is a form of consciousness,” and frames the essential role of art as a vehicle of communication and empathy:

Every work of art causes the receiver to enter into a certain kind of relationship both with him who produced, or is producing, the art, and with all those who, simultaneously, previously, or subsequently, receive the same artistic impression.

The activity of art is based on the fact that a man, receiving through his sense of hearing or sight another man’s expression of feeling, is capable of experiencing the emotion which moved the man who expressed it. … And it is upon this capacity of man to receive another man’s expression of feeling and experience those feelings himself, that the activity of art is based.

This core quality of art Tolstoy calls its “infectiousness,” and upon the artist’s ability to “infect” others depends the very recognition of something as art:

If only the spectators or auditors are infected by the feelings which the author has felt, it is art.

To evoke in oneself a feeling one has once experienced, and having evoked it in oneself, then, by means of movements, lines, colors, sounds, or forms expressed in words, so to transmit that feeling that others may experience the same feeling — this is the activity of art.

Art is a human activity consisting in this, that one man consciously, by means of certain external signs, hands on to others feelings he has lived through, and that other people are infected by these feelings and also experience them.

Art is not, as the metaphysicians say, the manifestation of some mysterious idea of beauty or God; it is not, as the aesthetical physiologists say, a game in which man lets off his excess of stored-up energy; it is not the expression of man’s emotions by external signs; it is not the production of pleasing objects; and, above all, it is not pleasure; but it is a means of union among men, joining them together in the same feelings, and indispensable for the life and progress toward well-being of individuals and of humanity.

More than a bridge from person to person, he argues, art is a bridge across eras, cultures, and lifetimes — a kind of immortality:

As, thanks to man’s capacity to express thoughts by words, every man may know all that has been done for him in the realms of thought by all humanity before his day, and can in the present, thanks to this capacity to understand the thoughts of others, become a sharer in their activity and can himself hand on to his contemporaries and descendants the thoughts he has assimilated from others, as well as those which have arisen within himself; so, thanks to man’s capacity to be infected with the feelings of others by means of art, all that is being lived through by his contemporaries is accessible to him, as well as the feelings experienced by men thousands of years ago, and he has also the possibility of transmitting his own feelings to others.

If people lacked this capacity to receive the thoughts conceived by the men who preceded them and to pass on to others their own thoughts, men would be like wild beasts… And if men lacked this other capacity of being infected by art, people might be almost more savage still, and, above all, more separated from, and more hostile to, one another.

Lamenting the growing perversion of the art world, which has warped our ability to tell good art from bad, Tolstoy insists that the only way to distinguish true art from its counterfeit is by this very notion of infectiousness:

If a man, without exercising effort and without altering his standpoint on reading, hearing, or seeing another man’s work, experiences a mental condition which unites him with that man and with other people who also partake of that work of art, then the object evoking that condition is a work of art. And however poetical, realistic, effectful, or interesting a work may be, it is not a work of art if it does not evoke that feeling (quite distinct from all other feelings) of joy and of spiritual union with another (the author) and with others (those who are also infected by it).

The chief peculiarity of this feeling is that the receiver of a true artistic impression is so united to the artist that he feels as if the work were his own and not someone else’s — as if what it expresses were just what he had long been wishing to express. A real work of art destroys, in the consciousness of the receiver, the separation between himself and the artist — not that alone, but also between himself and all whose minds receive this work of art. In this freeing of our personality from its separation and isolation, in this uniting of it with others, lies the chief characteristic and the great attractive force of art.

The stronger the infection, the better is the art as art, speaking now apart from its subject matter, i.e., not considering the quality of the feelings it transmits. And the degree of the infectiousness of art depends on three conditions:

The clearness of expression assists infection because the receiver, who mingles in consciousness with the author, is the better satisfied the more clearly the feeling is transmitted, which, as it seems to him, he has long known and felt, and for which he has only now found expression.

But most of all is the degree of infectiousness of art increased by the degree of sincerity in the artist. As soon as the spectator, hearer, or reader feels that the artist is infected by his own production, and writes, sings, or plays for himself, and not merely to act on others, this mental condition of the artist infects the receiver; and contrariwise, as soon as the spectator, reader, or hearer feels that the author is not writing, singing, or playing for his own satisfaction — does not himself feel what he wishes to express — but is doing it for him, the receiver, a resistance immediately springs up, and the most individual and the newest feelings and the cleverest technique not only fail to produce any infection but actually repel.

I have mentioned three conditions of contagiousness in art, but they may be all summed up into one, the last, sincerity, i.e., that the artist should be impelled by an inner need to express his feeling. That condition includes the first; for if the artist is sincere he will express the feeling as he experienced it. And as each man is different from everyone else, his feeling will be individual for everyone else; and the more individual it is — the more the artist has drawn it from the depths of his nature — the more sympathetic and sincere will it be. And this same sincerity will impel the artist to find a clear expression of the feeling which he wishes to transmit.

Therefore this third condition — sincerity — is the most important of the three. It is always complied with in peasant art, and this explains why such art always acts so powerfully; but it is a condition almost entirely absent from our upper-class art, which is continually produced by artists actuated by personal aims of covetousness or vanity.

Such are the three conditions which divide art from its counterfeits, and which also decide the quality of every work of art apart from its subject matter.

The presence in various degrees of these three conditions — individuality, clearness, and sincerity — decides the merit of a work of art as art, apart from subject matter. All works of art take rank of merit according to the degree in which they fulfill the first, the second, and the third of these conditions. In one the individuality of the feeling transmitted may predominate; in another, clearness of expression; in a third, sincerity; while a fourth may have sincerity and individuality but be deficient in clearness; a fifth, individuality and clearness but less sincerity; and so forth, in all possible degrees and combinations.

Thus is art divided from that which is not art, and thus is the quality of art as art decided, independently of its subject matter, i.e., apart from whether the feelings it transmits are good or bad.

The Post: Leo Tolstoy on Emotional Infectiousness and What Separates Good Art from the Bad – appeared first on Brain Pickings

What Color Is The Wind? A Most Unusual Serenade to the Senses, Inspired by a Blind Child – @Brainpickings.org0 (0)