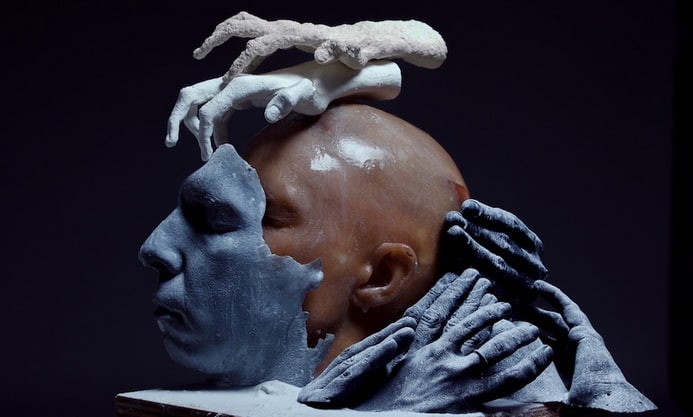 LA-based artist Sarah Sitkin says that when she was a kid she used to play with the “dental alginate” mold that dentists use in order to made reproductions of a patient’s teeth. The then budding sculptor and artist would spend “hours” creating plaster reproductions of her own face and hands. Now that you know at least that much about the highly-skilled Sitkin, it should be a bit easier trying to process her surreal sculptures, masks and disembodied heads and hands.

Another fateful aspect of Sitkin’s childhood is that her family owned a hobby shop called Kit Kraft which meant that she quite literally had any kind of artistic tool or material at her disposal. Deadstock inventory ended up in Sitkin’s hands and when she was finally able to work in the store herself she found herself rubbing shoulders with Hollywood special effects artists (including one of my favorites, the great Jordu Schell whose work can be seen in films from the Predator and Alien  franchises.) Sitkin has gone on to develop a large following (including Genesis P-Orridge) and is also the creator of a bizarre and wildly popular skin for the iPhone that not only looks like it was made of real flesh but also included an all-too-realistic ear on the back.

I’ve included a number of images below from Sitkin’s large portfolio that will really get under your own skin in all the best ways possible. That said some should be considered NSFW. The artist wearing her own creations. A mask made from Sitkin’s own genitalia.