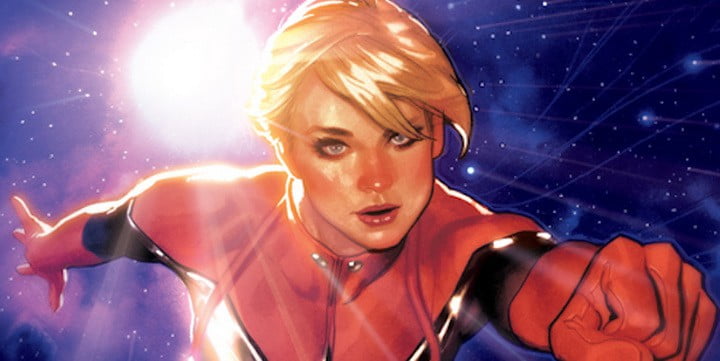 When Captain Marvel Will Finally Have Its Director, According To Kevin Feige – @Cinemablend0 (0)

Summer 2016 was a big step forward for Captain Marvel. At San Diego Comic-Con, it was finally confirmed that Brie Larson will play Carol Danvers on the big screen. We were also supposed to find out who would direct the feature around that time, but instead, only four candidates were mentioned to be in consideration. It turns out that it’s taking a little longer than expected to find a director for Carol, but Marvel Studios president Kevin Feige is confident that the studio will find the right person for the job before 2016 is finished.

During an interview with Vulture, Kevin Feige said that Captain Marvel will likely have its director before the year is up. He also elaborated on what the process is like to find not just the individual who will helm Carol Danvers’ solo adventure, but most of their other movies. As he put it:

“We’ve been meeting amazing filmmakers, but often the way we work, as was the case on Doctor Strange and most of our movies, is that we have a … I don’t want to say a ‘road map,’ but we have a general view of what the movie is and then we meet with filmmakers and share that with them and then they pitch it back to us in a better fashion.”

Kevin Feige then said that the person whose pitch aligns best with and expands upon what Marvel has in mind is the one who typically receives the job, specifically citing Doctor Strange‘s Scott Derrickson and Thor: Ragnarok‘s Taika Waititi. As of late August, Niki Caro, Lesli Linka Glatter, Lorene Scafaria and Rebecca Thomas were the most recent directors to supposedly be in contention for Captain Marvel. If Feige’s prediction is correct, then Marvel will hire one of those women or someone who hasn’t been mentioned to the public. From there, they’ll ideally announce who scored the job immediately to the masses.

Touching on her comic book history, Kevin Feige also noted that the creative minds at work with this project have been taking extra care to make sure they handle Carol Danvers’ origin story and her connection to other corners of the Marvel universe correctly. He continued:

“With Captain Marvel, there’s so much potential in the comics and there have been so many incarnations of her powers and the characters who’ve had that mantle that we’ve been focusing in on exactly how do we tell her origin. How does it fit into the cosmic side of our universe? How does it fit into what we’re doing with the nextAvengers movies? So really, that’s what’s been delaying that particular announcement.”

While there’s still a chance Carol will make her MCU debut in Avengers: Infinity War, Captain Marvel (written by Meg LeFauve and Nicole Perlman) will show how she receives her amazing abilities. So yes, it’s been a long wait, but if we’re patient a little longer, hopefully Marvel will reveal who will helm Carol’s big story right before the transition into 2017.

The Richard Sorce Project: Closer Than Before0 (0)

No Thoughts on When Captain Marvel Will Finally Have Its Director, According To Kevin Feige – @Cinemablend0 (0)