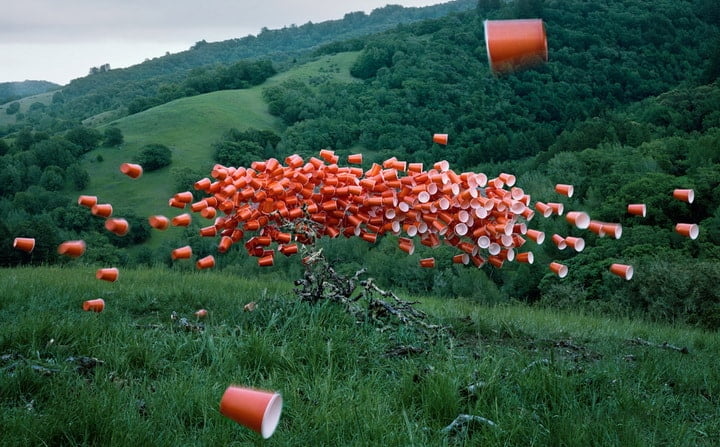 Photographer Thomas Jackson (previously) is intrigued by the movements and behaviors of swarms, something he seeks to replicate in temporary installations he constructs for the purpose of making a single photo as part of his Emergent Behavior series. From swarming locusts, to schools of fish or flocks of birds, the San Francisco-based artist recreates these self-organizing behaviors with common objects like plastic cups, party streamers, or hula hoops. Each piece is made as seen here using various methods of filament and other hidden structures that hold everything in place for the photograph—nothing is digitally edited and the pieces aren’t being thrown through the air. From his statement about the project:

The images attempt to tap the mixture of fear and fascination that those phenomena tend to evoke, while creating an uneasy interplay between the natural and the manufactured and the real and the imaginary. At the same time, each image is an experiment in juxtaposition. By constructing the installations from unexpected materials and placing them where they seem least to belong, I aim to tweak the margins of our visual vocabulary, and to invite fresh interpretations of everyday things.

Jackson will be showing many images from Emergent Behavior at Miller Yezerski Gallery in Boston starting November 18, 2016. What Color Is The Wind? A Most Unusual Serenade to the Senses, Inspired by a Blind Child – @Brainpickings.org0 (0)